Birr Cooks – Potatoes with Tworog and linseed Oil in Odessa 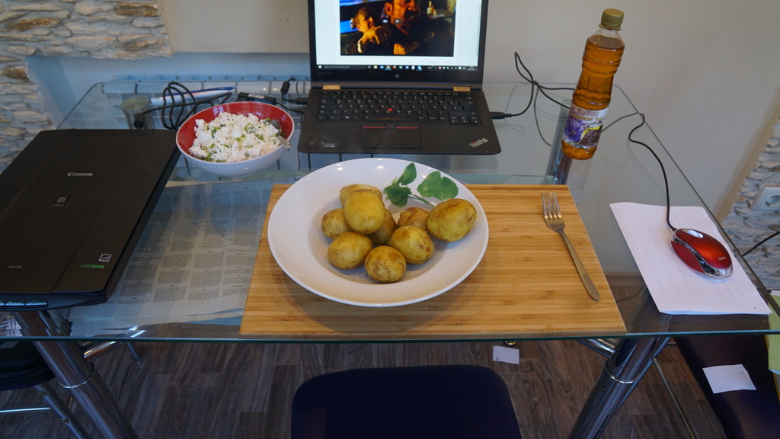 
At the market I bought fresh linseed oil. Linseed is available in large amounts at the grain stands, next to sunflower seeds (with and without husks), pumpkin seeds and walnuts. Pine nuts are available at the spice stands. I saw and bought(?) linseed oil with Lilija in Odessa two years ago at the other market, the Privoz. Don’t know anymore, it was a family’s stand where they pressed their own oil. But in 2014 we were also in Vologda, from Moscow a bit to the right in the direction of the center of Russia. That’s where I first saw linseed oil in Russia and then later the same brand in Petersburg stores. In Vologda I bought tworog and potatoes and we had a Berlin meal in the Taiga. 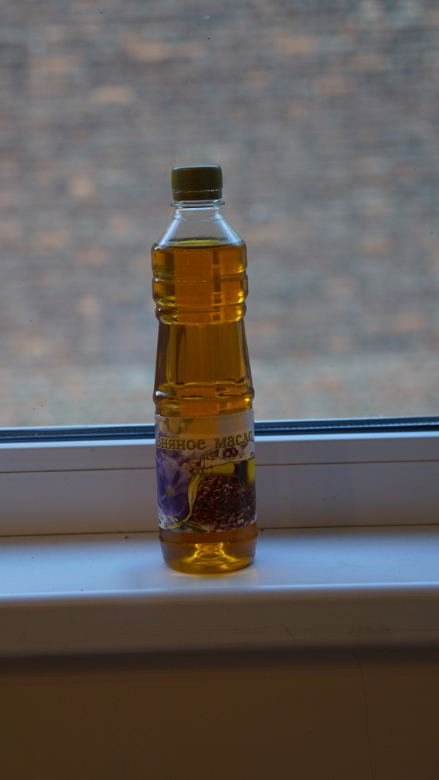 But that was somewhat difficult. The reason is simple. In German tworog translates as quark. But in terms of German basics, it’s no quark. At least to me. Slightly sour, sometimes; but in any case very crumbly. To us, its most comparable to cream cheese or layered curd cheese. Also a difference: the less fat our cheese contains, the more crumbly it is or the opposite. And here there’s also a crumbly tworog with a high fat content. Such “creamy” quark, in a “mass” as we know it, is not at all available. In Vologda I mixed it with some carbonation and yoghurt, or smetana (cream).
But my main question, what does a Russian or Ukraine cook make with linseed oil remains unanswered til today. – I had a mill in the Spreewald send me a brochure because it was supposed to have linseed recipes. Well those were all variations of potatoes with quark and linseed oil – some with herring, some without, ridiculous. It can certainly be used for frying, it’s supposed to go with potato pancakes. But who does this then please? My teacher Larissa told me that they use linseed for salad and during Lent they mix salt into the oil and dip bread with lemon.
So I didn’t buy the tworog at the market. Maybe you remember last year’s blog entry with the photo of the stacks of tworog in the large market hall at the New Market. ( www). Do I know how really fresh it, how often it’s stacked and unstacked and lay there out in the open? I don’t have to run to the toilet again. So I bought unpacked tworog in the supermarket and stored it the fridge. 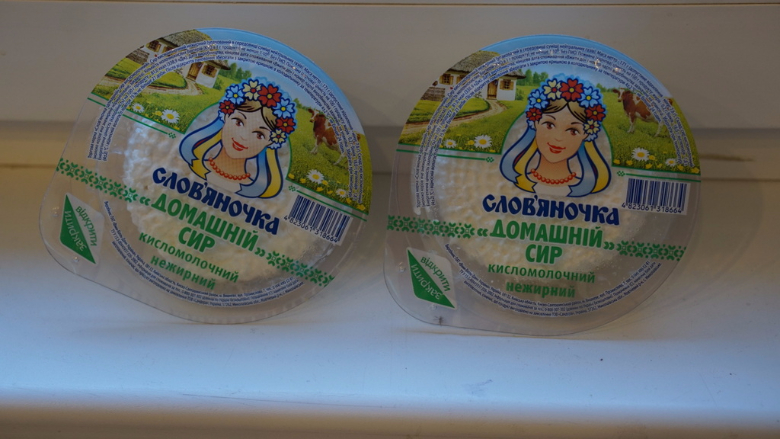 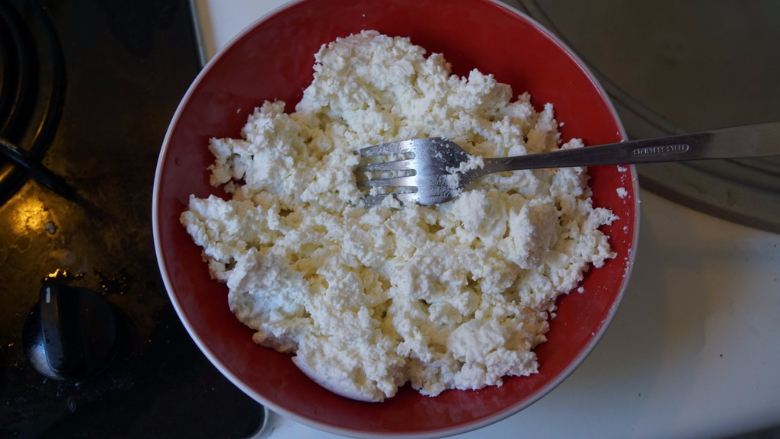 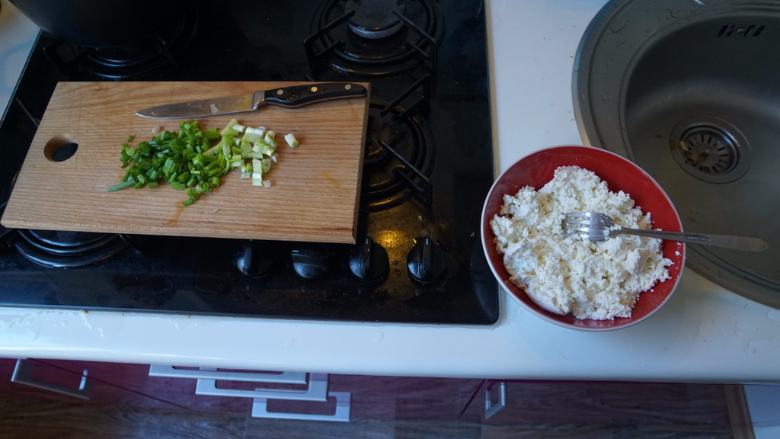 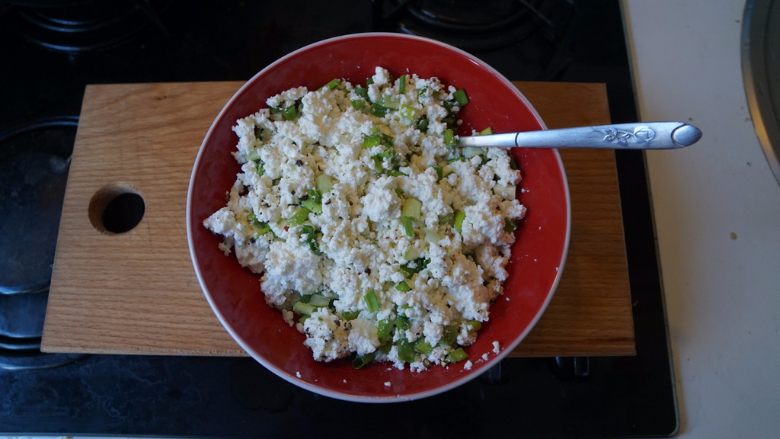 I neither had carbonated mineral water nor yoghurt. I wanted to try it pure anyway. With spring onion and pepper. The potatoes were new potatoes. It tasted good only somehow different, the linseed oil even has a “thinner” taste and doesn’t have as an intensive aroma as ours. The tworog also tasted completely different. Well that was the first time. I’ll make it again some time in the future. Because Larissa told me about a special stand at the Piroz Market…. We’re going there on Saturday and we’ll have outdoor lessons with other people. And then hopefully, there’ll be an interesting new story. 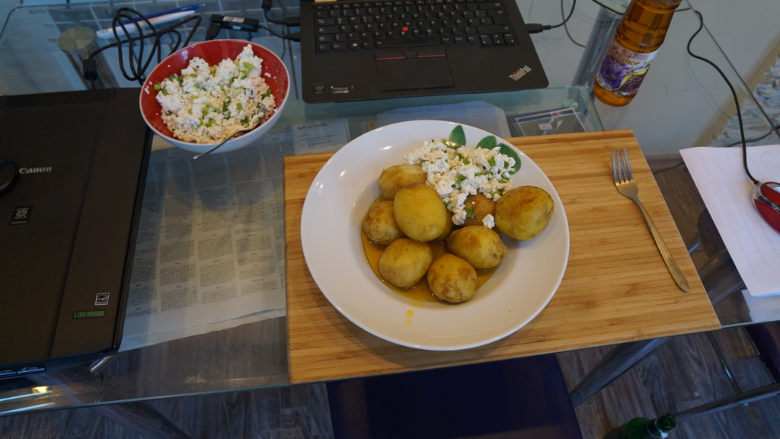