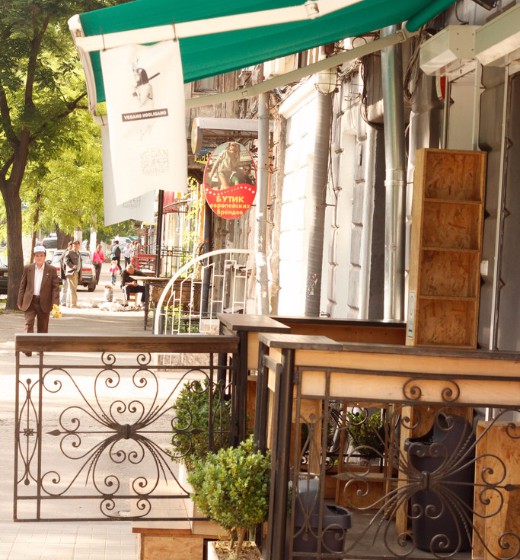 Aleksey from Tour de France Café showed us a vegetarian restaurant during our drive through Odessa. Of course it has to be seen and tried out. After dropping him off, Raoul (son 1) and I drove there. 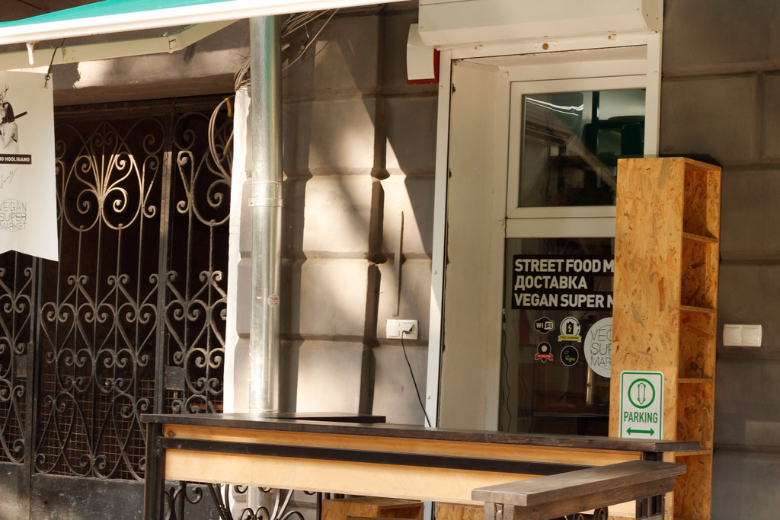 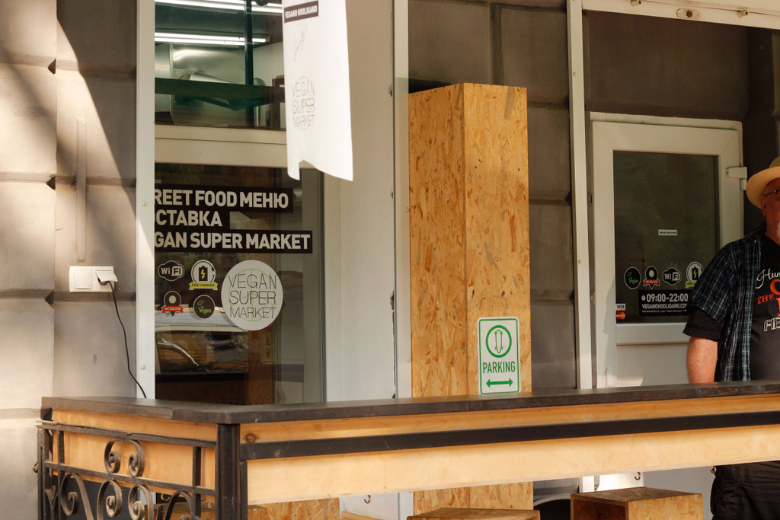 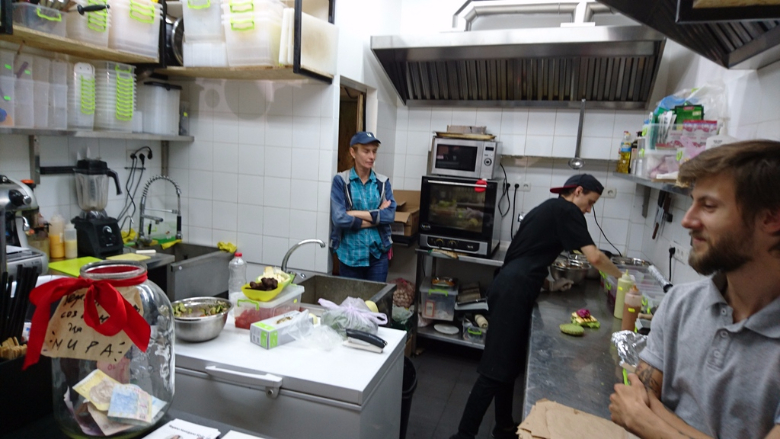 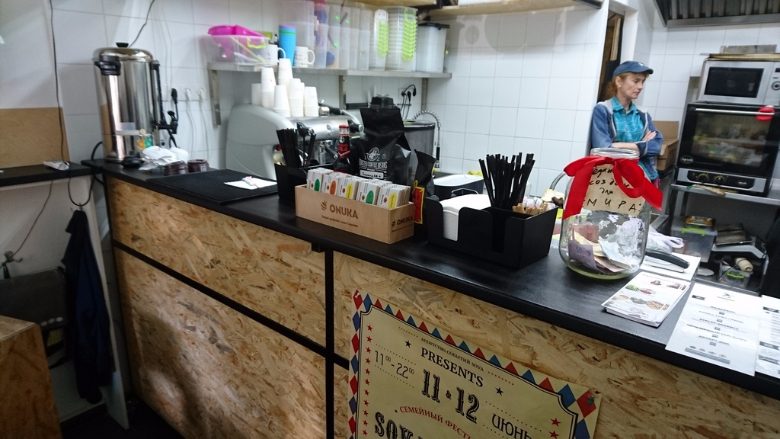 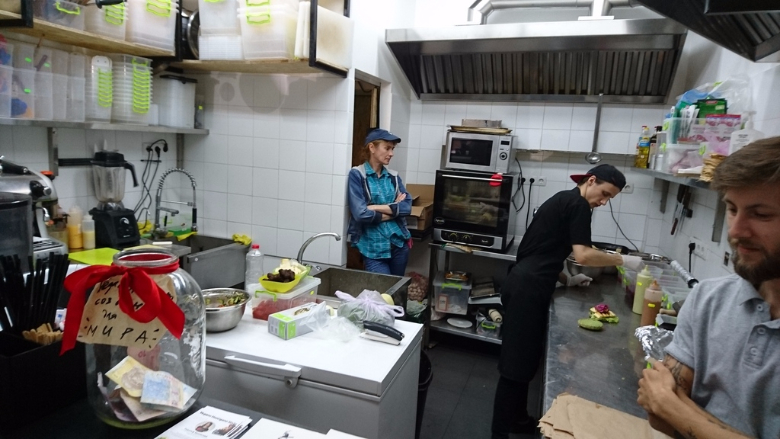 Raoul wasn’t hungry. So just me. The store is from Kiev and there’s also one in Liviv. In the meantime I saw that there’s also a bus, probably for events and with exact locations and schedule where it will be.
Restaurant, that’s a bit much and they even call themselves “VEGANO HOOLIGANO ODESSA Street Food Cafe“. Really small place/kitchen with a counter and inside one spot to sit and outside somewhat more. That’s a test, if it does well in Odessa also and they’re actually looking for something new, larger, Aleksey told me. 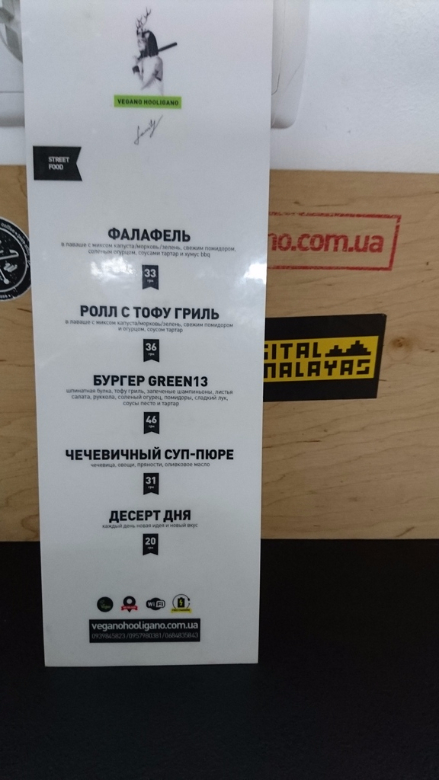 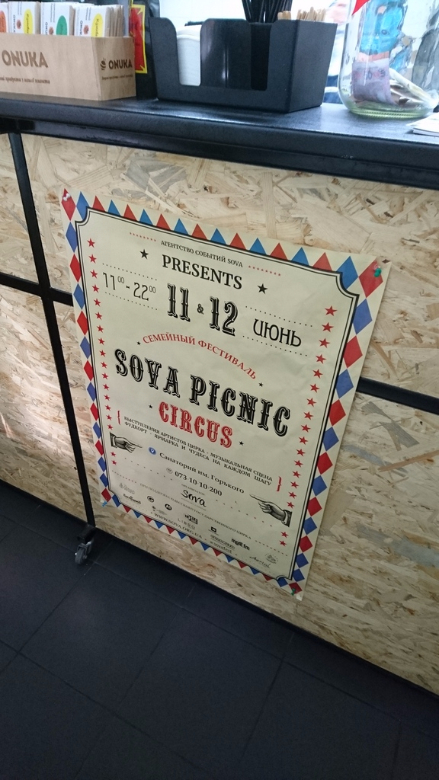 The menu is as manageable as the place itself. Five dishes: Tofu burger, tofu roll, falafel burger, falafel roll, a green soup. Beverages, coffee, of course, that’s everywhere here, and self imported: Club Mate and Club Mate Cola. Club Mate was not in stock at the moment, immediately brought back memories of the good old days in the East. 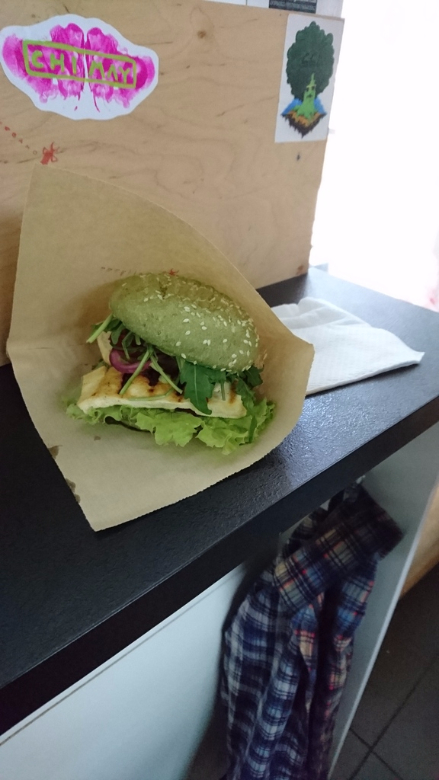 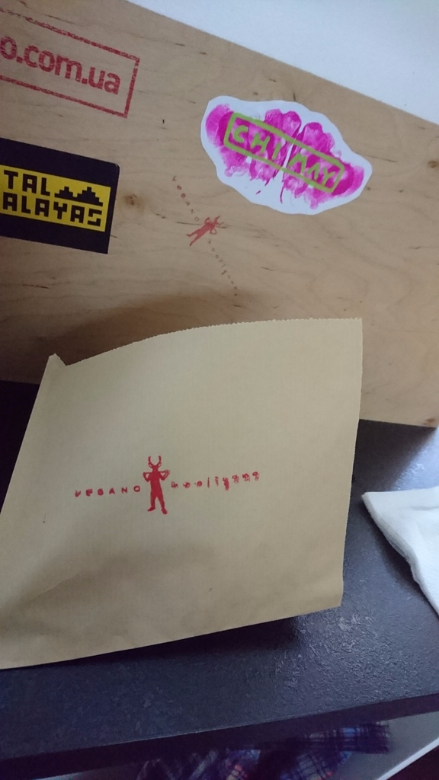 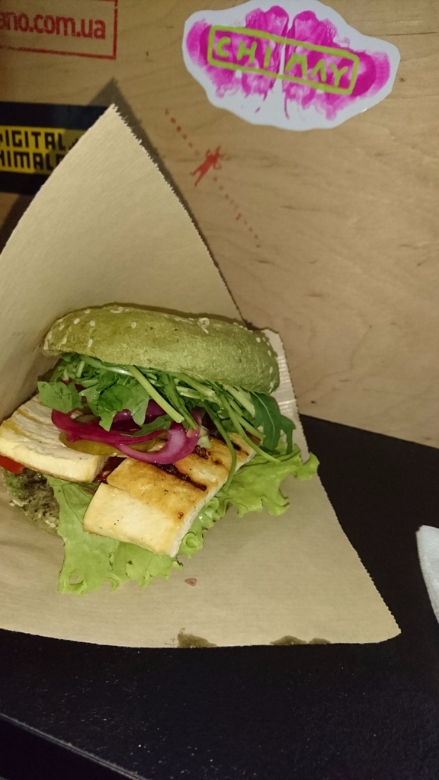 I ordered a tofu burger for myself, for Raoul a Club Mate Cola. The burger costs 46 griwna (1,70€), ok. A side comment on that. I’ve regularly been in St Petersburg since 1999. I’ve wondered since then about no tofu being available there. All markets have Asian stands with pickled vegetables, seaweed etc. These are also available at stands in the large supermarkets. But still no tofu. Falafel was also not available, although there are dozens of schwarma shops, that also smell “correct” and are simply not doner kebabs, and are mostly run by Caucasian looking people. But not so. – Lilija tried one last time, she wrote but I don’t know it yet. And one in 15 years… – Now I had already discovered falafel in Odessa last year. Since then, there are several more shops for it, even a shop that’s named that: фалафель. But tofu surprised me. In St Petersburg there’s packaged tofu in a few large supermarkets for three, four years now. Which is why I was pleased to then find tofu in Odessa.
There was heavy metal playing, fitting for the name Vegano Hooligano Heavy Metal and at least the main sales person was heavily tattooed. I didn’t ask about it. During my next visit there were more females behind the counter and the music was softer.
The prepping went very quickly. In a burger bun, white tofu, veggies, sauce. Tastes good. It’s ok. Just not really my thing when the buns aren’t toasted; I just generally prefer toasted. So in the end it always becomes one compounded mass. This was the case here as well. And unfortunately, the bag holding the burger doesn’t hold the fluid and starts dripping. So eat quickly and just to be sure, bend forward slightly. I ate another one that Raoul also tasted and he also thought it was tasty. The buns don’t bother him. There are still some things to see but we wanted to go home and I planned to see them later. 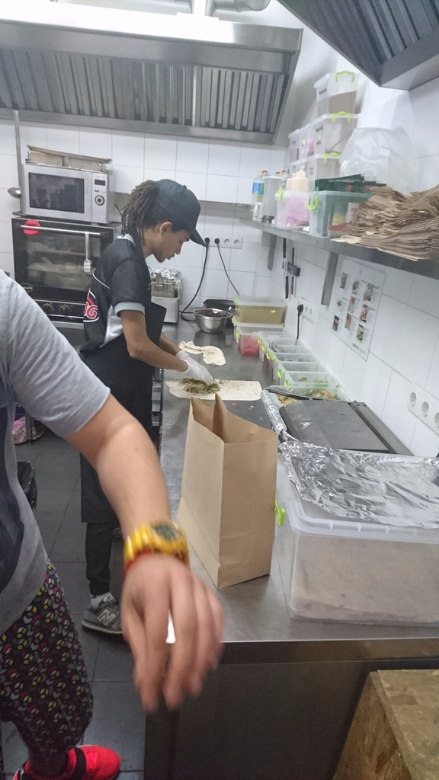 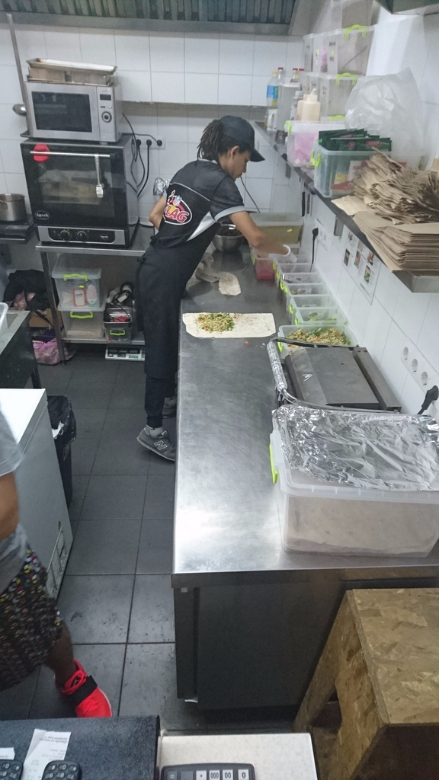 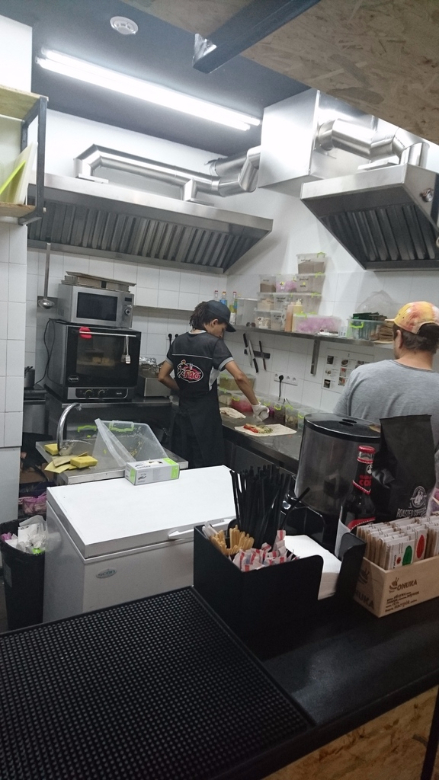 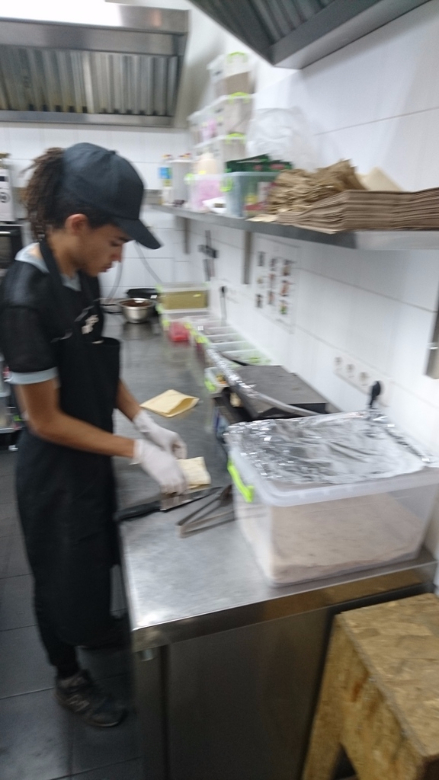 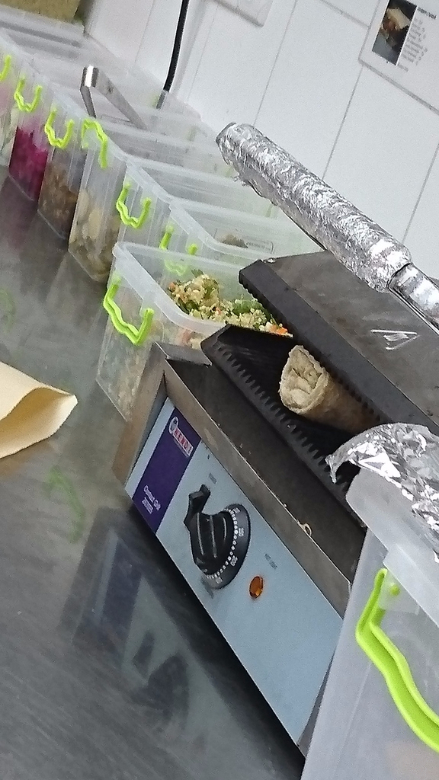 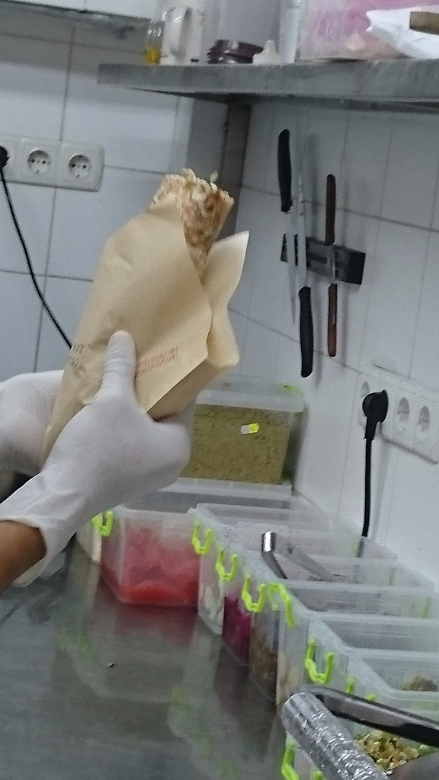 I’ve been there a total of three times in the meantime and therefore have already tried more than half of the dishes. Tofu roll, the inside tastes like the burger and the wrapper is made from lawasch (very thin, almost paper-like pita bread) or something similar. Careful, it also drips! I also drank a Club Mate Cola with it, which is not available cold. Yeah, lukewarm cola: especially great. Minus points for that. The third time I ate falafel roll, also good but the sauce was too much of a “plastic sauce”. I didn’t think it fit. 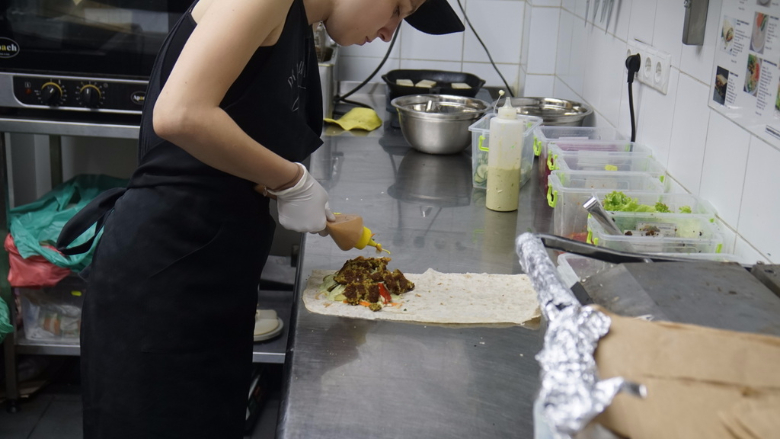 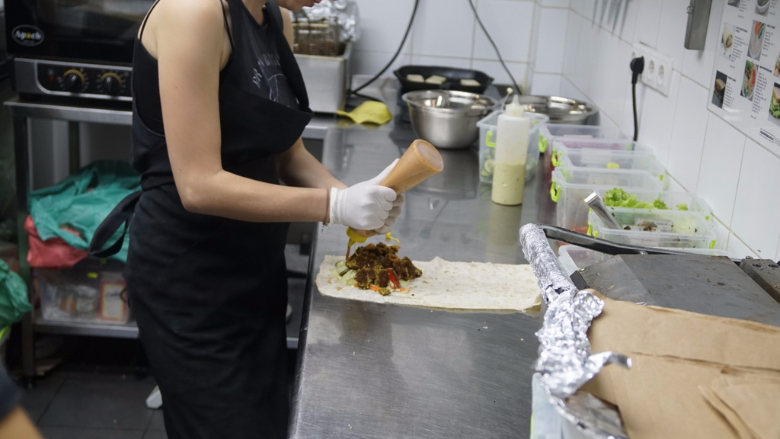 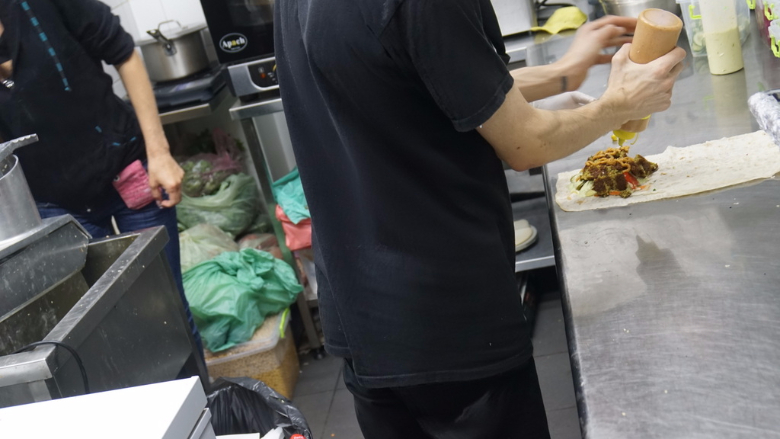 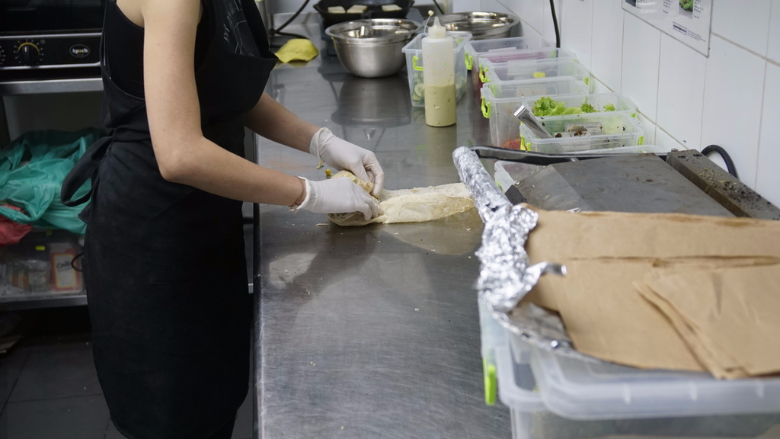 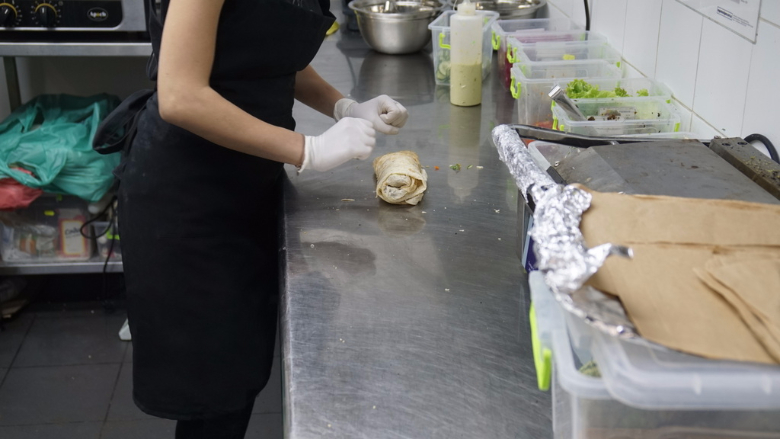 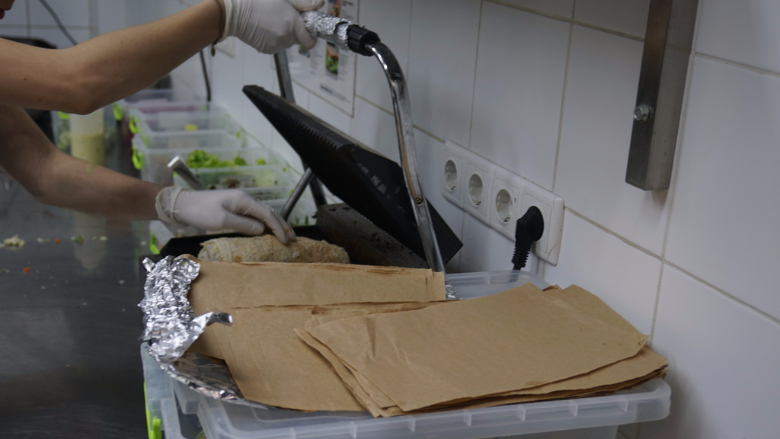 On the window pane it says vegan super market, so I took a look at the website.
And that really bowled me over. Seitan sausages!!!! (The Word auto correction wants to turn seitan into Seitab. Very nice.) Seitan, and that in an eastern non-EU foreign country. But they don’t have it in Odessa and he believes also not in Liviv, and whether it can be ordered or how, he didn’t know either. Homemade or imported, all unclear. He asks his manager. Seems to be more of a loose merger than a true chain. 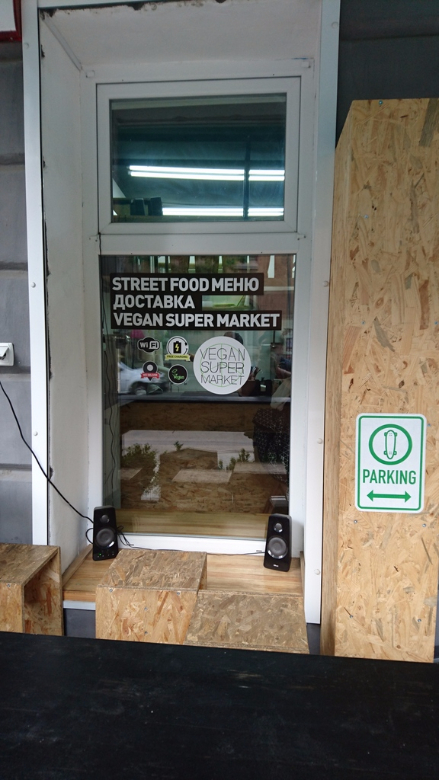 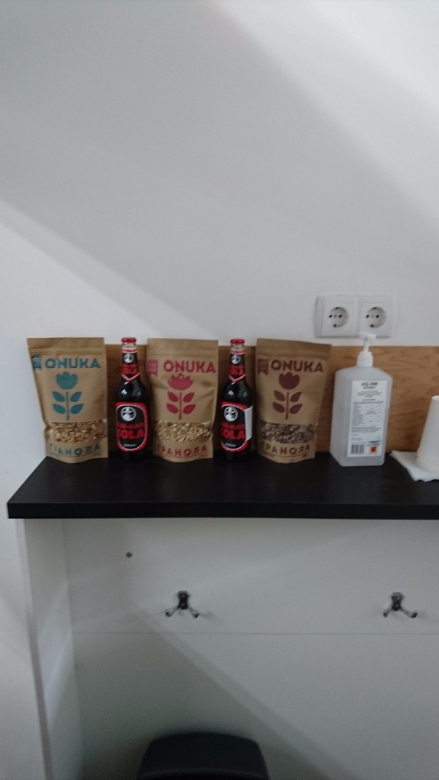 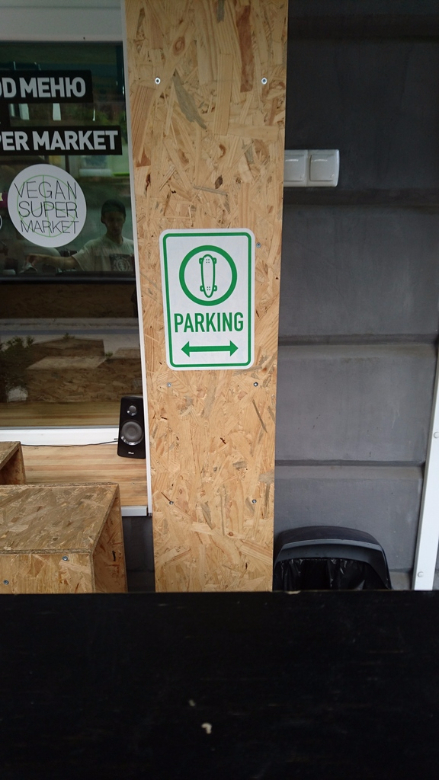 From the vegan supermarket range (even the complete range is highly manageable, “supermarket” is a concept for the distant future) they have line of muslis and fruit bars. 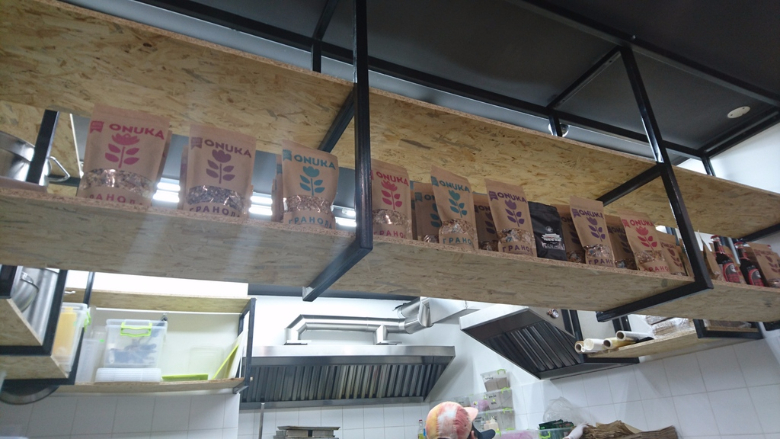 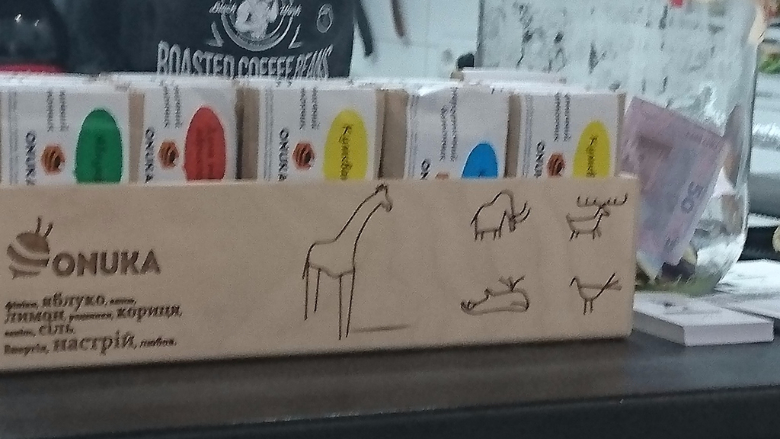 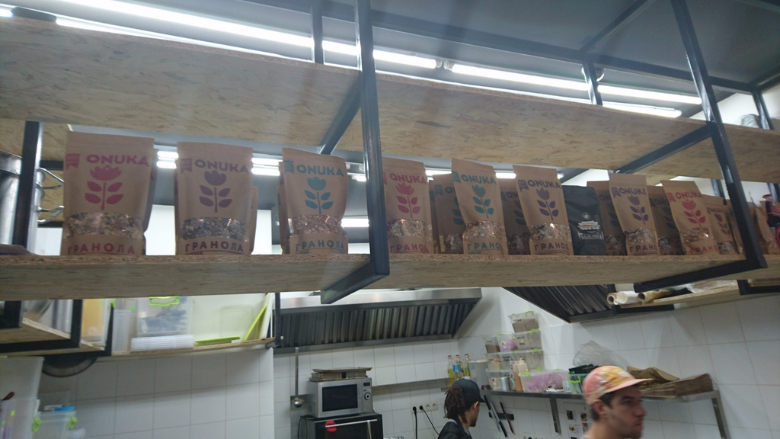 I hope they make it. At the moment they’re at Staroportofrankivskja 89. Tourists can also get there pretty easily. By walking from the center or with various trams and matschrutkas. 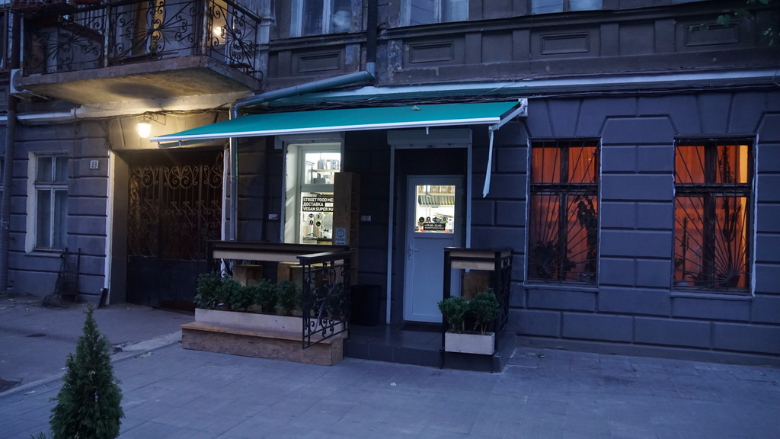