Warning: Parameter 2 to qtranxf_postsFilter() expected to be a reference, value given in /kunden/393588_10551/birrs-world/wp-includes/class-wp-hook.php on line 286
 Birrs World | Odessa II – Ekatarinen Square 1 --> 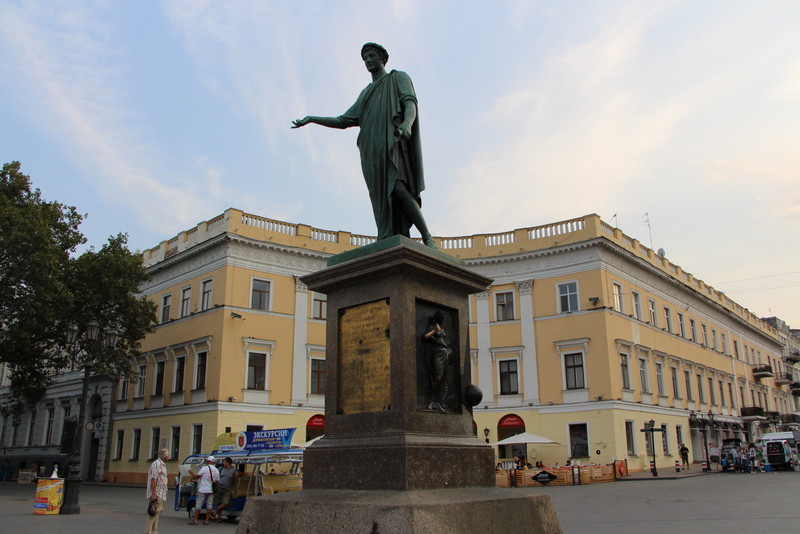 
I was happy to arrive, Lilija is also here but will soon be away as well. Only a short appearance. 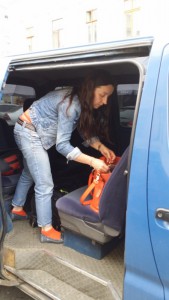 Thank god the flight was 45 minutes late. But after searching around for one and a half hours to pick up Lilija without finding the way to the airport, she then agreed to take a taxi. It cost 68 grwina (3 Euros)! With such prices, why should I even bother driving. Today: Where am I / are we staying? Hmm. Things went slightly awry. The landlady of the apartment I really wanted got nervous because I kept postponing, so she rented it out and parked me somewhere else. I’m also in the center now in the chessboard but on the other side. The first apartment is the one bordering on the Moldavanka district. This one is also on the border; next to the promenade and the sea as well as the harbor, This sounds much more attractive than it really is. I can’t see the sea; the promenade trees are in the way. That’s not so bad but I’m living here in the eye of the storm. The old apartment was on the western border of the tourist quarter. Other than the music which played once in a while and only on weekends in the city park and only drifted over to me now and again, I hardly noticed it while hidden in the rear courtyard. But then, went out the door and presto, I was in the center. 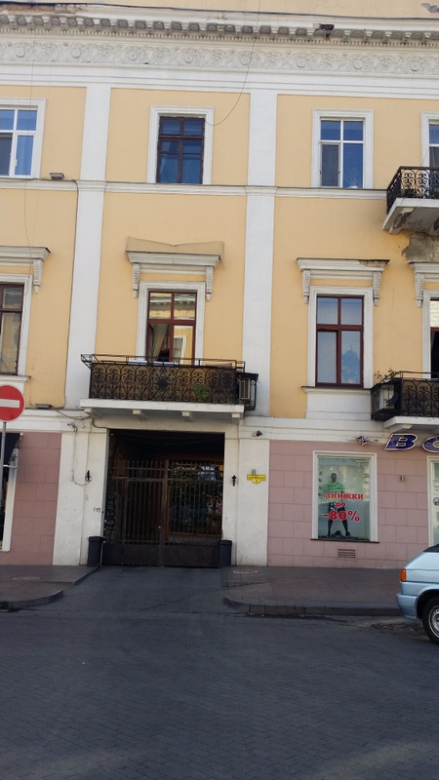 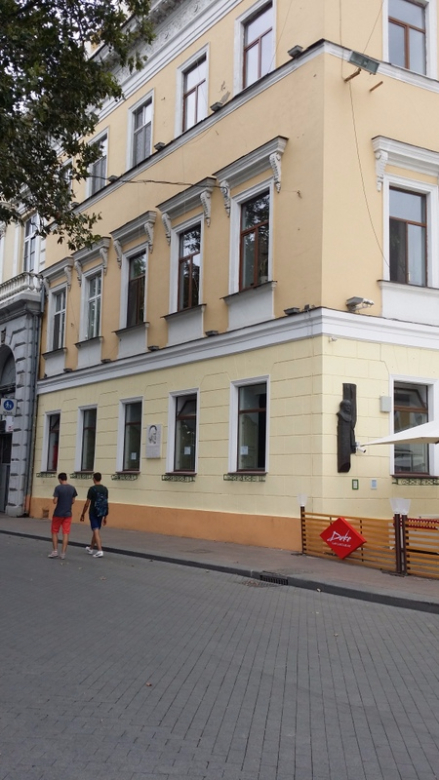 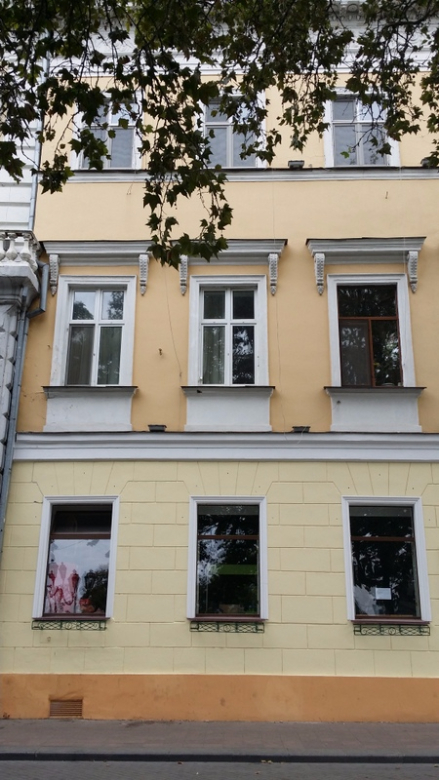 That’s from the front. The courtyard entrance where the car is also. On the first floor, the two white windows on the left are mine. 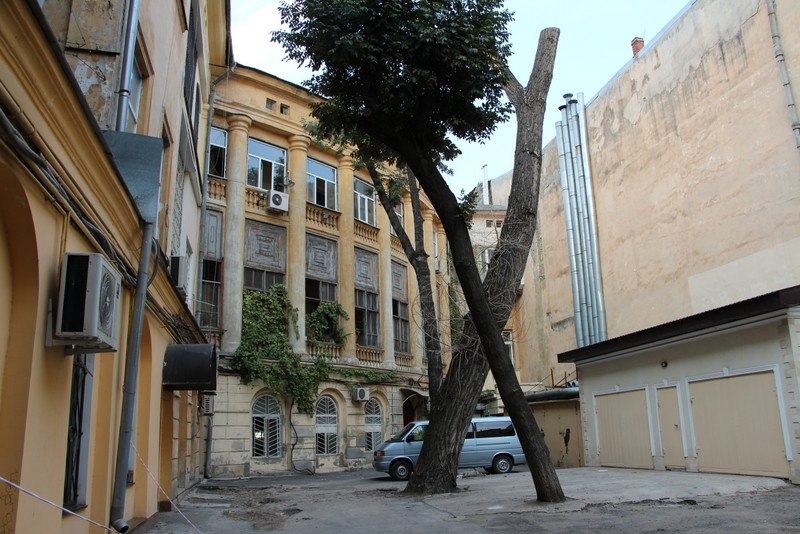 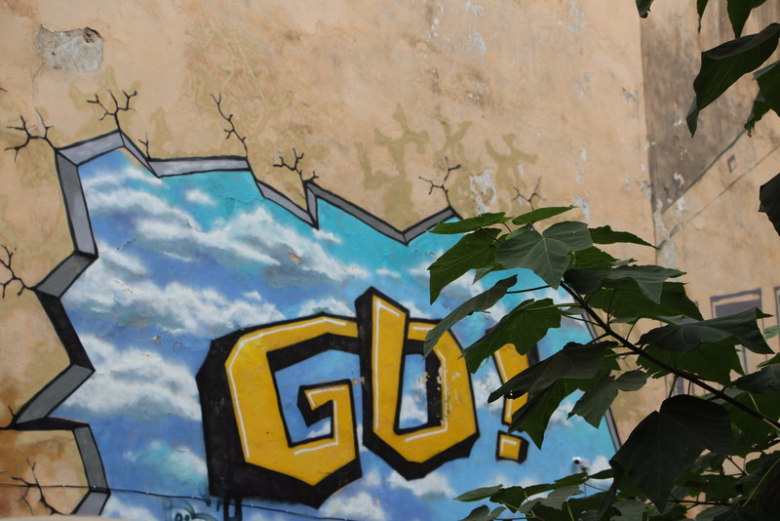 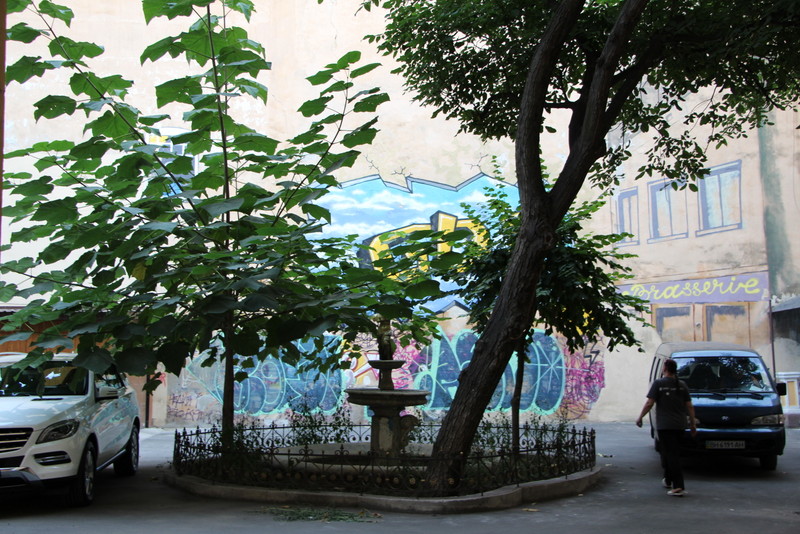 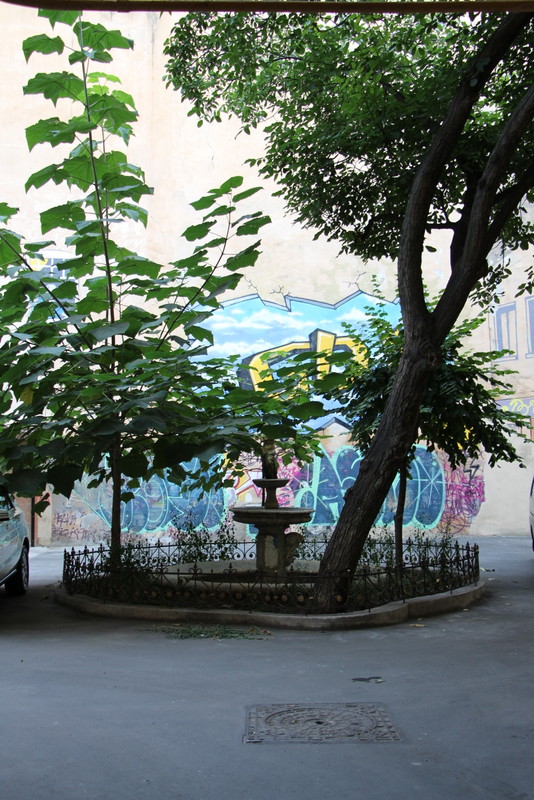 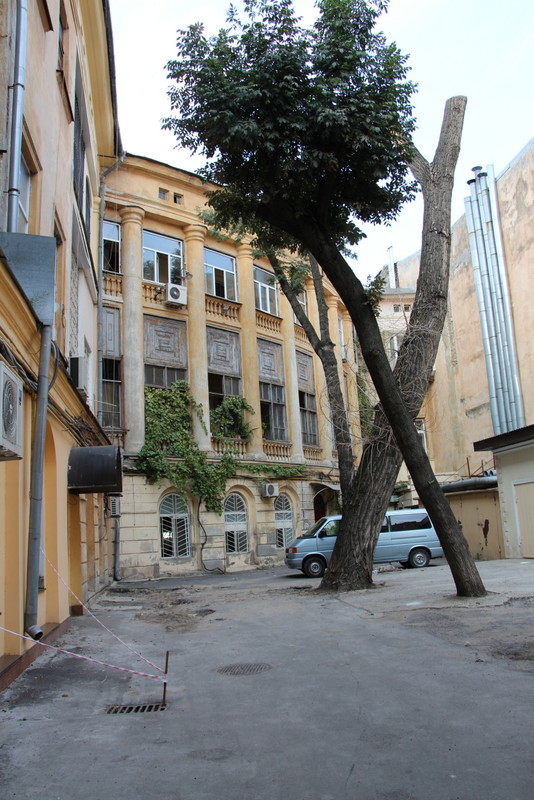 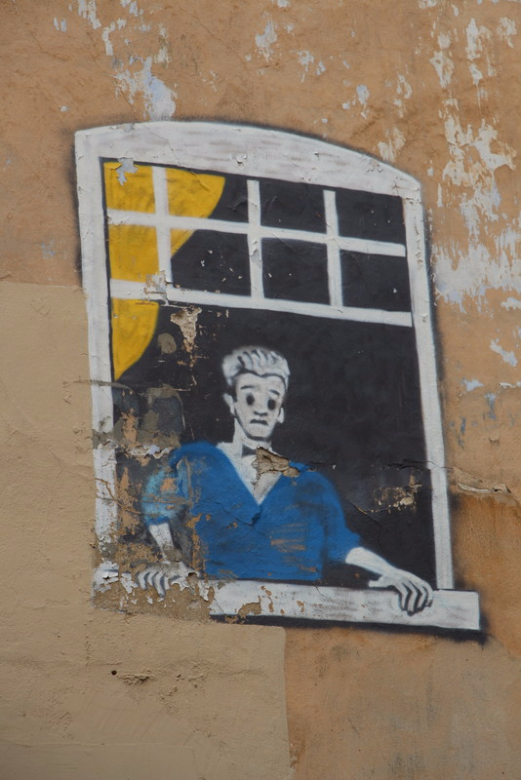 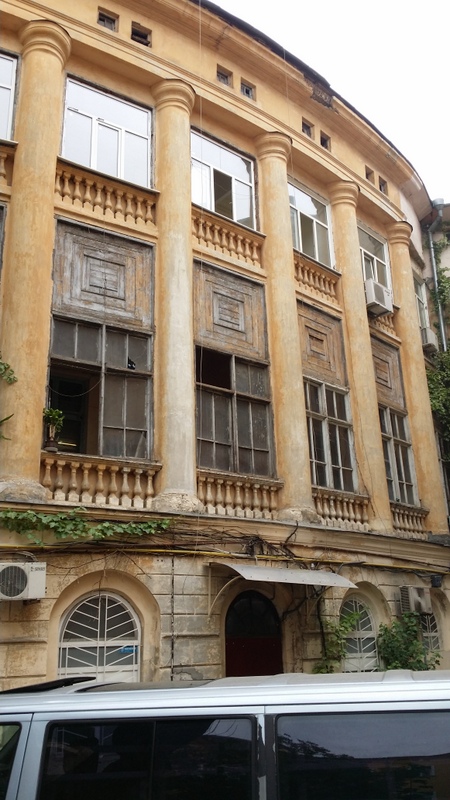 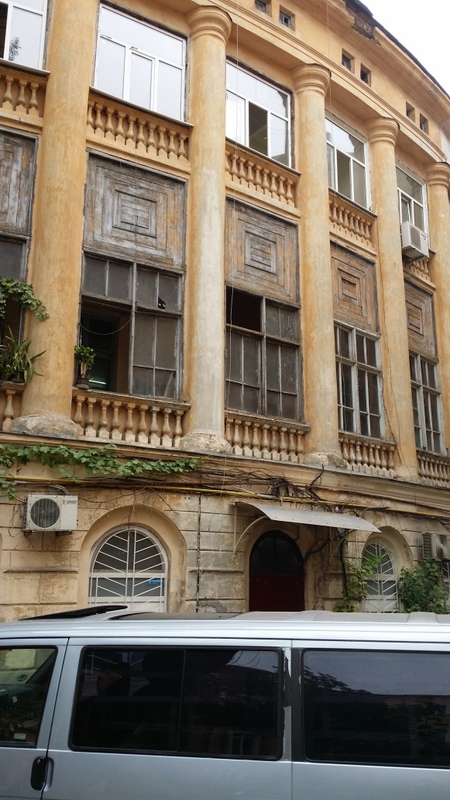 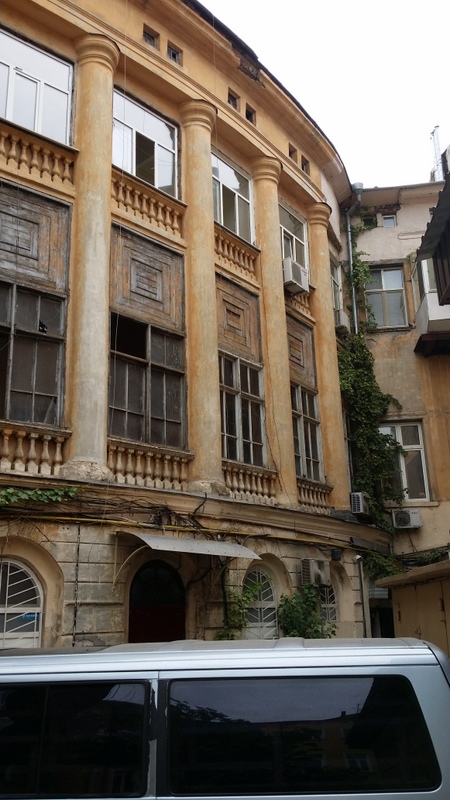 That’s the rear. No comment. As described in Lilija’s last texts, we have the “black stairwell”. (The entrance can be seen in the middle above the bus).
This apartment is now the center of the center. To my left is the square with the statue of Ekatharina and to my right is the statue of the “Duke” (Armand du Plessis, full name Armand Emmanuel Sophie Septemanie du Plessis (1766 – 1822), Count Chinon, from 1791 the 5th Duke of Fronsac, 5th Duke of Richelieu and Pair of France), the first Mayor of Odessa. (So back then there was already, which annoys Russians or which they make fun of, a foreigner, a Frenchman, assigned as Mayor by Catharine. Today there are Georgian. This also accounts for the city’s transnational charm.) I had already been astounded about “Hotel Duke”, “Restaurant Duke”, because of the many Ellington fans. In Odessa Richelieu, who is really related to the famous Marshall Richelieu, is only called Duke. 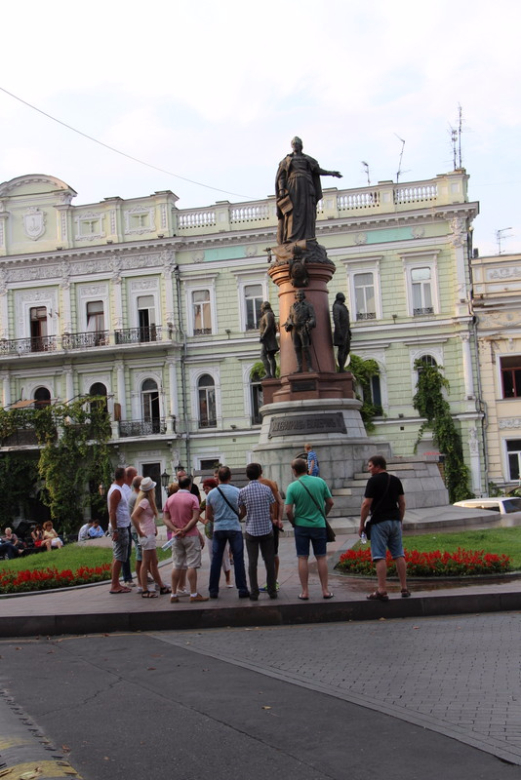 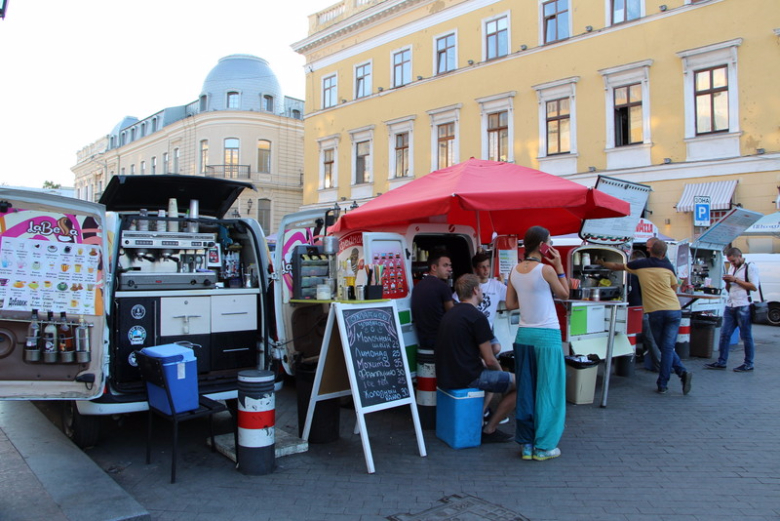 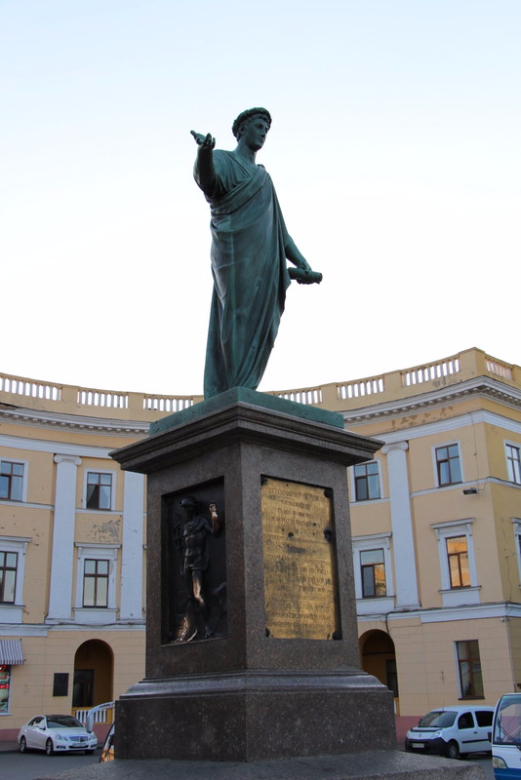 The woman, the man and in the middle a front of one the coffee stands in cars, which are really everywhere people are. Here they are the border between Ekatarina Square and the promenade. 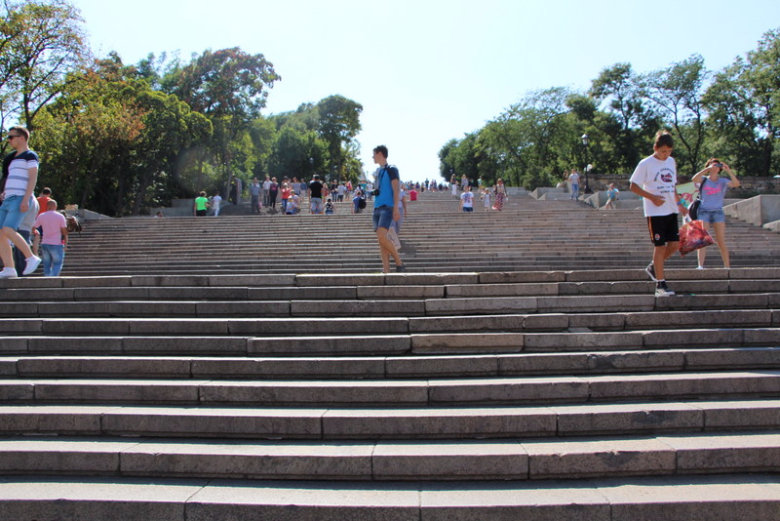 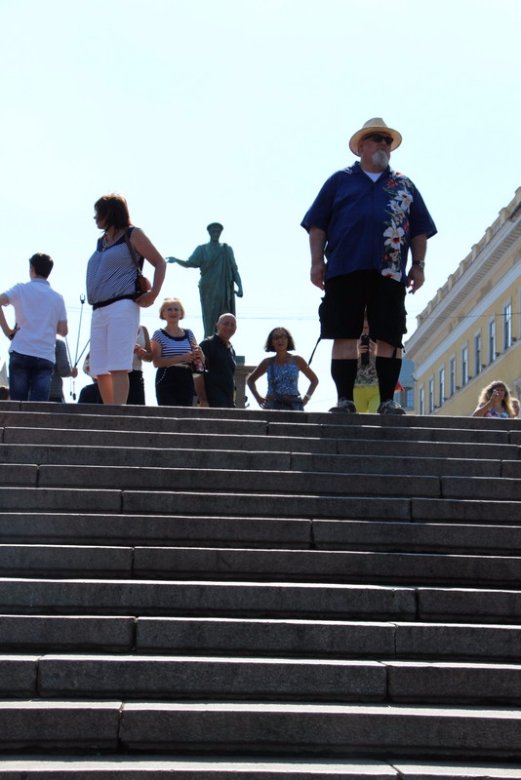 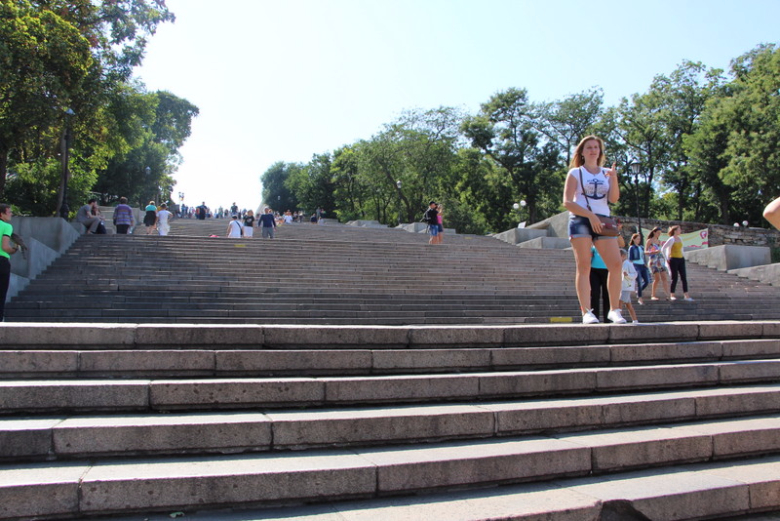 The famous Potemkin steps begin directly at the feet of his statue. Definitely the highlight of an Odessa visit. I don’t want to bore anyone:but the stairs are world famous for the scene in the 1925 silent film “Battleship Potemkin” by Sergej Eisenstein. The film takes place in 1905 and reconstructs the beginning of the 1905 Revolution. There was a mutiny on the battleship sitting in Odessa Harbor. And people on the steps had come to support the sailors. The Tsar’s army shot at these people and there was of course panic. That can be seen in this scene. The film didn’t have its own music. In the Soviet Union it was shown with music from Beethoven, Tschaikowsky etc. In Berlin Eisenstein met the composer Edmund Meisel, who also later wrote the music for Walther Ruttmann’s Film Berlin: The Symphony of the Metropolis (1927). For the film premiere on 29th April 1926 in Berlin’s Apollo Theater, Edmund Meisel composed film music which strongly adhered to the director’s instructions. – Salt & Pepper would like to release both pieces of music together with the sound-music from Meisel. Been working on it for quite awhile but it looks like it could happen this year. –
Back. You’ll notice from my careful description that there is an onslaught of tourists much
like it is at theBrandenburg Gate. Although the tourists are relatively quiet, what’s really annoying are the megaphone announcements for the snake museum, slightly up the street and for the city tours directly in front of the door. The first evening I actually sat here writing with the window open until about 9p.m. when a band began playing. At first they only sang in Ukrainian and I let it go. But then came “Oldies” in English, and that brought out the very worst in the band. The trumpeter tooted away without a voice; the singer/guitarist had a spectrum, that he never left even for a melody and he sings wrong. The drummer beats the same song after song. A set, a break with new age Andes flute pipes. And the second set repeats it all from the beginning. The window was then closed at “Rock Around The Clock”. Even Lilija felt ill at “Fly me To The Moon”. I can sing better than that!! And I can empty any hall. But for real pain. The a pop band comes, carried by the trumpet, it’s tiring. Even Cake live annoys me with that at some point. They push their performances further and further along the promenade. First evening to the right of my building, second evening in front, third evening to the left. Next day, one building further. Everything can be heard despite closed windows. If this band doesn’t play, another one plays. Yet Odessa’s worst band still manages to get an audience of about one hundred people. This evening we are being deadened with Andean folklore. Now a new band is starting and trying to do hard rock classics. Up to now the peak was Thursday to Monday. The national holiday with stage at the Duke. Children’s choir, state folklore groups from all parts of the Ukraine, “world music” etc. Heart, what more do you want? The main thing is badly played. I don’t understand it. There highly educated musicians here. The music academy has a very good reputation and then this. 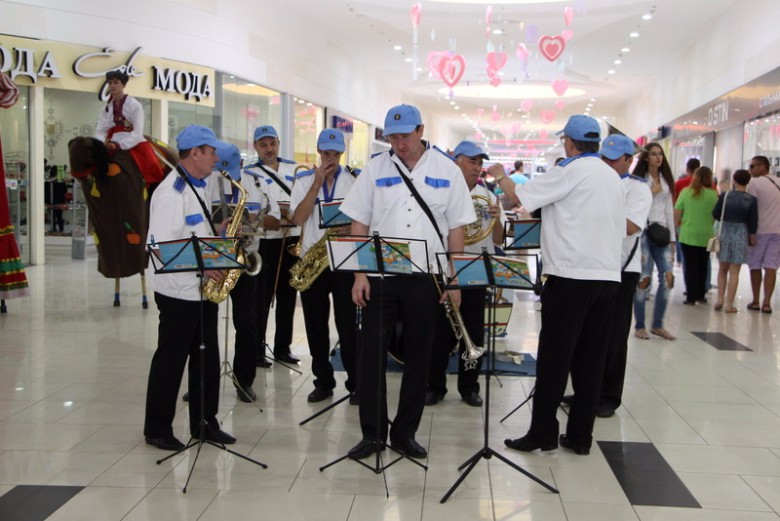 
Coincidentally, on Saturday we listened to the retro band of Odessa’s State Orchestra in a shopping center. Brass band with a drummer that plays retro. Here and in Russia this is music from the 40s-60s which was publicly played by such brass bands in parks, sanatoriums, swim halls. Polka, waltzes and the like. Super band, excellent musicians, all clean, accentuated, played to the point, great arrangements. Even if one doesn’t like this music, it’s immediately clear that these are all good musicians. I’d already seen the large orchestra once on TV or in Youtube. And was impressed back then. I chatted with the bandleader through Lilija. His question,why I thought this was great, good, – see above. His reply, they all studied in Odessa…. Instead of having this group blow away the garbage from people’s ears.
Otherwise, it’s beautiful here. We took two long walks; once five, once seven an a half kilometers, always starting on the promenade. My first real walks since breaking a leg. Lilija also noticed that Odessa natives don’t run or go for walks like us: they stride and saunter on their promenade. They’re very calm and the promenade, the square in front of the opera, are all firmly in their hands. We already noticed that during our first visit a year ago when we arrived by chance during the 200th anniversary of the city’s foundation. – At the time the lonely highlight of the open air concert at the harbor was Thomas Anders. 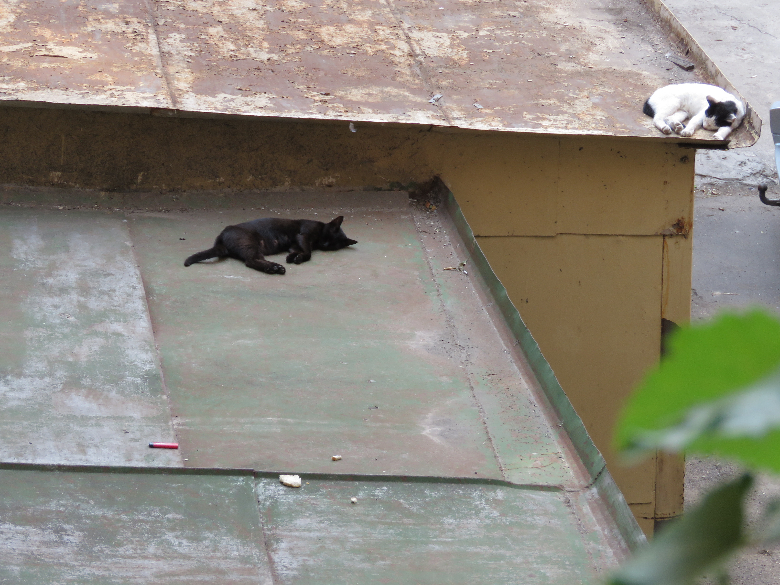 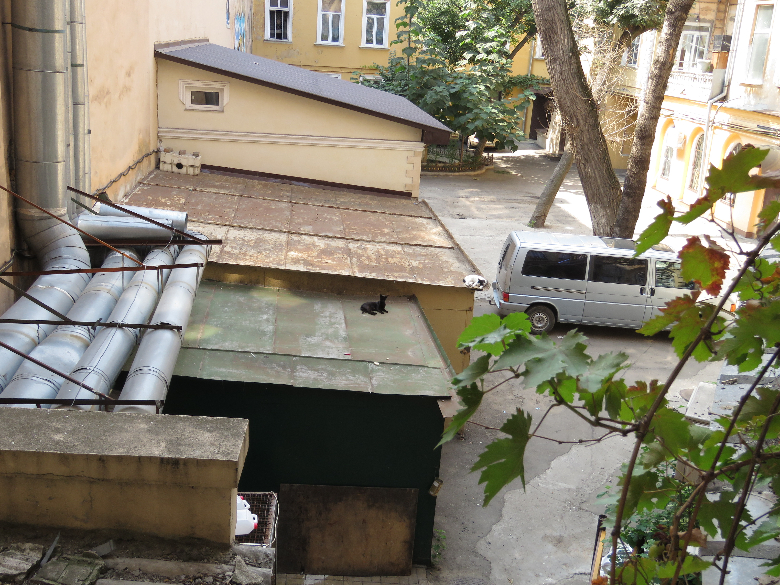 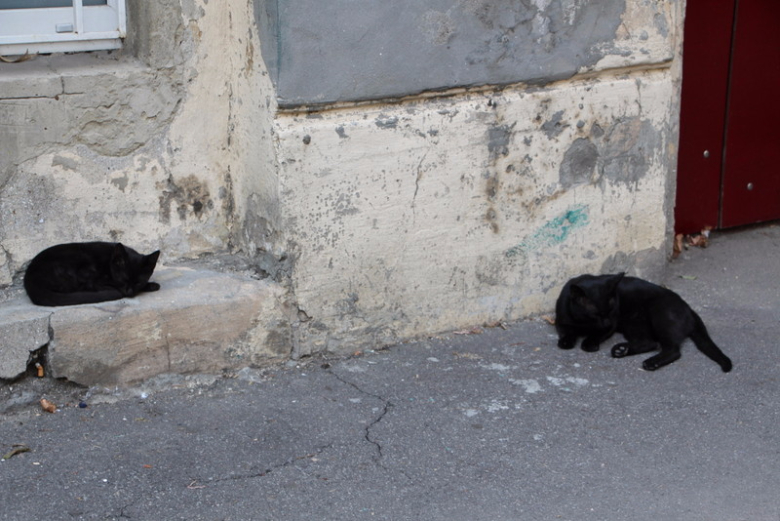 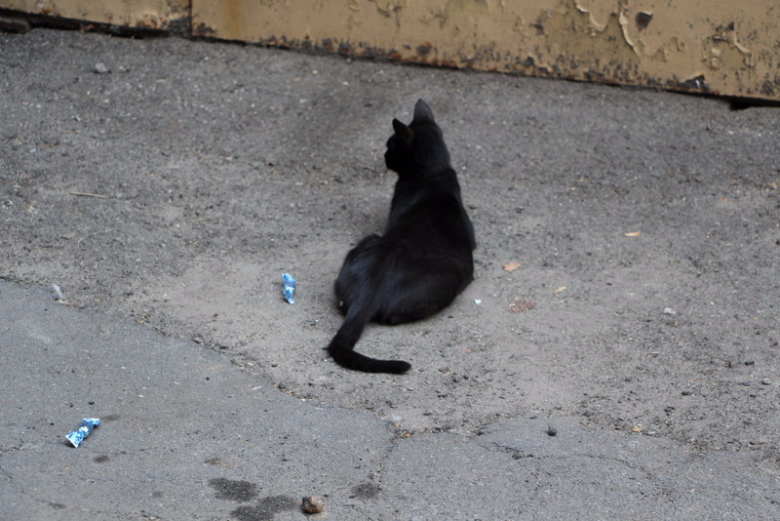 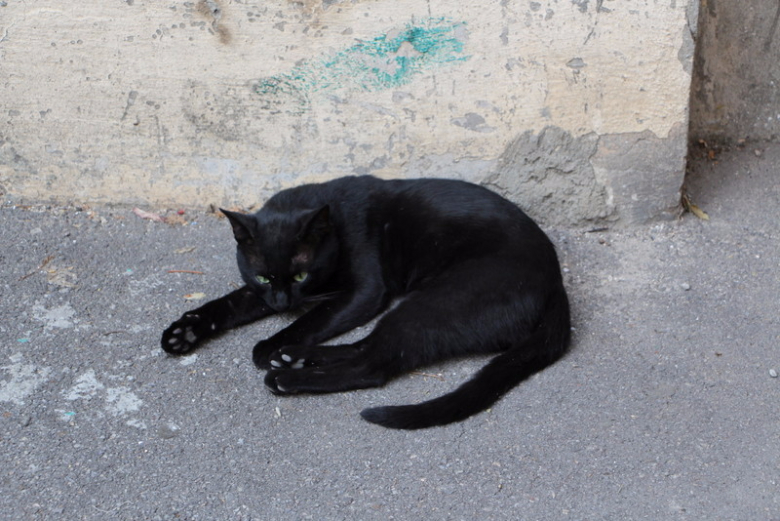 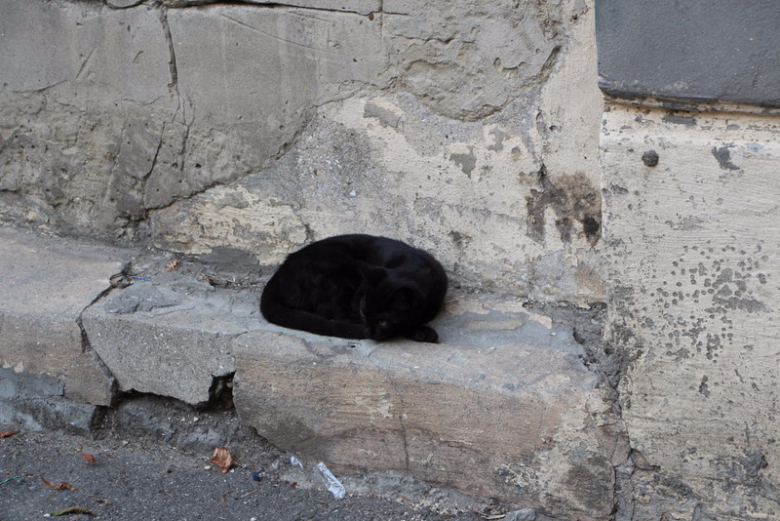 There are are other residents; three black and one black and white cats. The residents and the restaurant feed them with leftovers. Not my world. 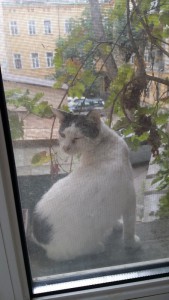 Visit to my kitchen window on the first floor. But nothing here.