Warning: Parameter 2 to qtranxf_postsFilter() expected to be a reference, value given in /kunden/393588_10551/birrs-world/wp-includes/class-wp-hook.php on line 286
 Birrs World | Odessa II – New camera and discovering Trasa Zdorovja --> 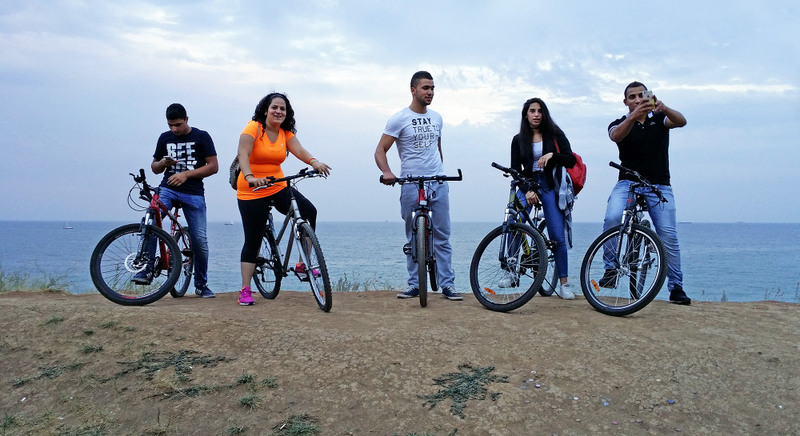 Fool that I am, I left the battery charger for my Canon camera in Berlin. Now Lilija is pretty quick with snapshots and she supplied me with tons of photos for a few days. They haven’t all been used. But things are getting tight. Sometimes a photo of a bread shop or a few sack shops. Then your zippy reporter heads out and quickly takes new photos. Until, oops and the battery was empty. My second camera was bummed off me by a guy named Pico. So only pictures at all times with the mobile? Also crap. Some would say buy yourself a new battery charger and that when things become really tricky.

Here’s some input on how I prepped myself, what I bought extra for the ride, what I bought here, wanted to buy. What I forgot and what I brought too much of. But only so much first, charger for Canon: not here. Neither in the store or online for delivery from Kiev. My dear Olga brought me her Canon charger. It didn’t match. Pity. And I was itching to do it in the meantime. I think it looks great with lots of photos…
So I bought myself a new camera, one that can also be left in the car. There are 2 chains here, sort of like Saturn or Media Markt. But they have about 10-5 % of the products we expect to find in such stores and some things, not at all. I couldn’t find a true photo shop. I needed cables and adapters for the monitors. Not available in the stores. I went to “Radio Market” but unfortunately, there was nothing there related to photography.
Somehow I had to be happy to have found anything. Prices €60 – 150, then€ 300 plus right away. A selection of about 10-15 models. In the store with the large selection. Why so few? Two reasons I think. Certain things occur more quickly here than at home. For example there are no more CD players. Everyone has mobiles with mp3-players, or streams. Why does anyone need a CD player. And the camera in the mobile is no doubt better than that€80 thing. Why schlepp around yet another camera. That broke Kodak’s neck. Services like Instagram do the rest. It doesn’t go from the camera, only from the mobile. The choice of mobile devices is good: telephone and tablet, which is enough. WLan is available on every corner. And don’t forget the 2nd thing. If money is tight, 2 devices – one is too much. The mobile is actually 2 in 1. Money is needed for other things.
I didn’t want Nikon and definitely not Sony. I bought another Canon Bridge Camera. (Also hoping that it had the same battery as the large one. But why should they do me that favor?) SX 400 IS for 3699 UAH = €149 . at Amazon 129, otherwise 134, that’s ok. Shouldn’t think of the fact that a replacement charger in Germany costs €8 – 20. One for € 29 also has 2 additional batteries. The card is from Toshiba. There was no Sony and I didn’t want Kingston. 40 MB/s – 8 GB – 10, costs 3.75 – 5.60 in Germany online. I paid 4.33. 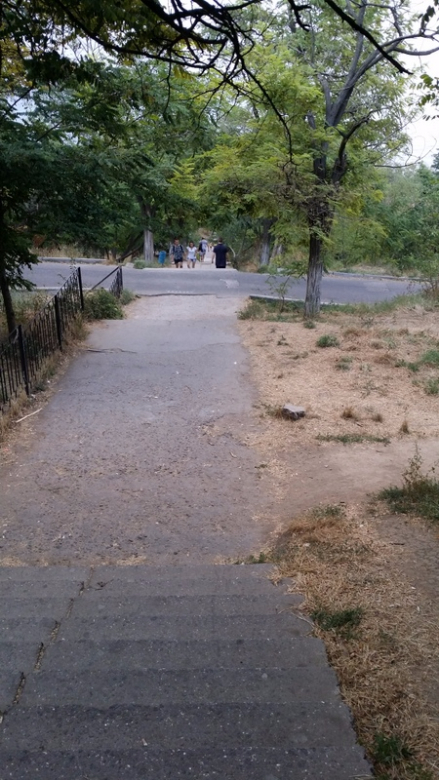 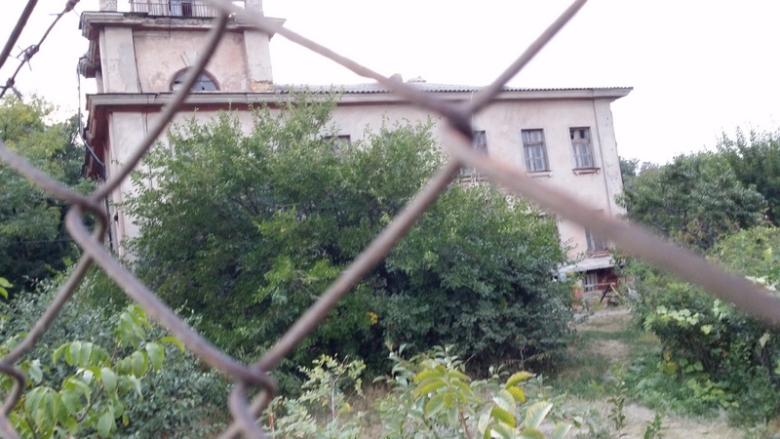 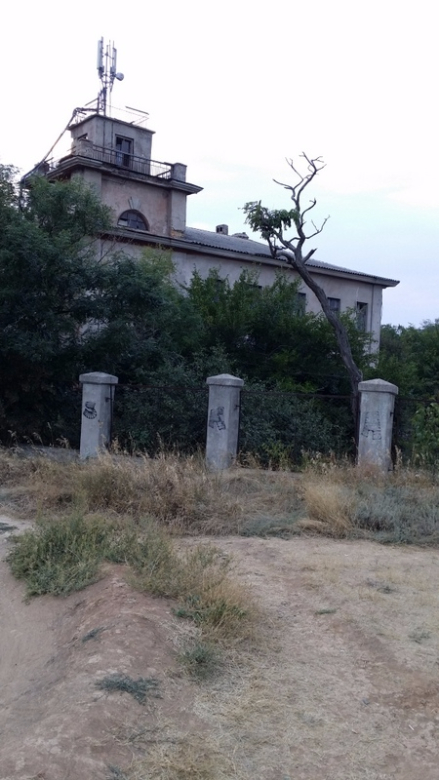 This is the route down to the beach. – A house on the beach. Would be it. I’m on it. Have found one.

It was beautiful weather and “my travel feet were itching”. I’d already found a spot on the map with an inner-city beach that I wanted to check out. And I arrived at the beach, mainly by guessing. Doesn’t matter. Goal achieved. I’m standing high above the sea. There’s a stairway to the beach. I had no idea whether there were parking spaces further down at the end of the street and didn’t want to risk reversing the bus up the hill to turn due to a lack of space. It all happened already. Last time I had to drive backwards quite a bit up the hill with Lilija and cars came constantly behind us that also wanted to go down and on the other side there were those who moved at a pace of centimeters, wanted to go up, sticking close to me. And I only say Görlitz! 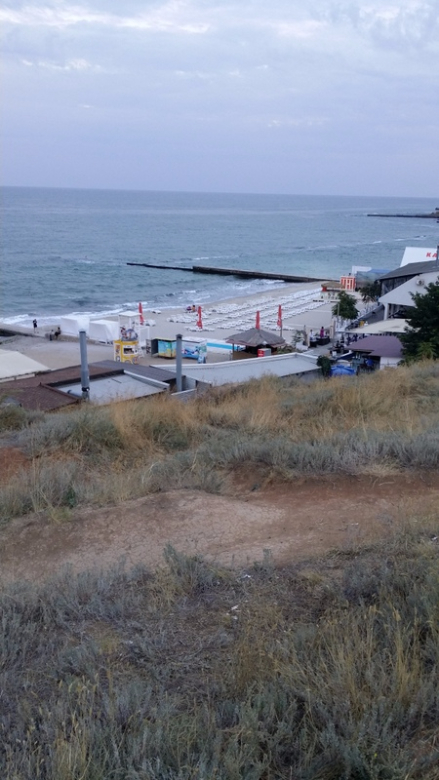 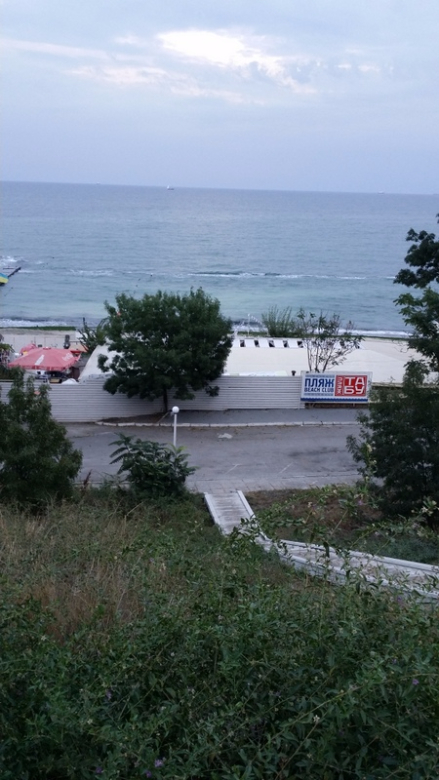 The beach was empty. It was already late. The sun loungers stood A+ in rank and file. I walked around a bit and enjoyed the air, the tranquility. The seagulls did their thing. 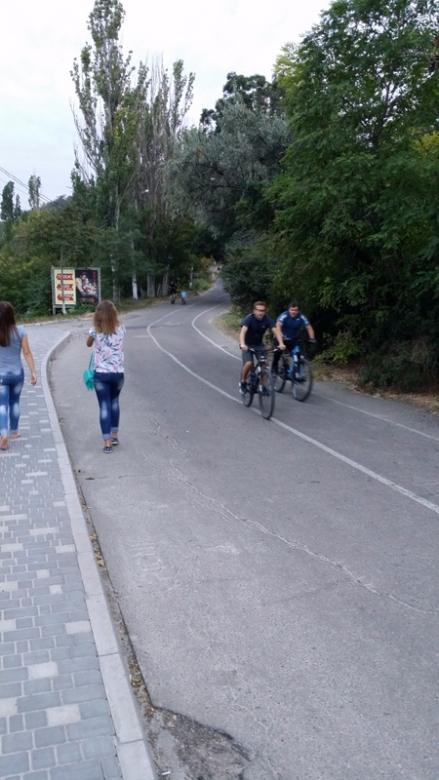 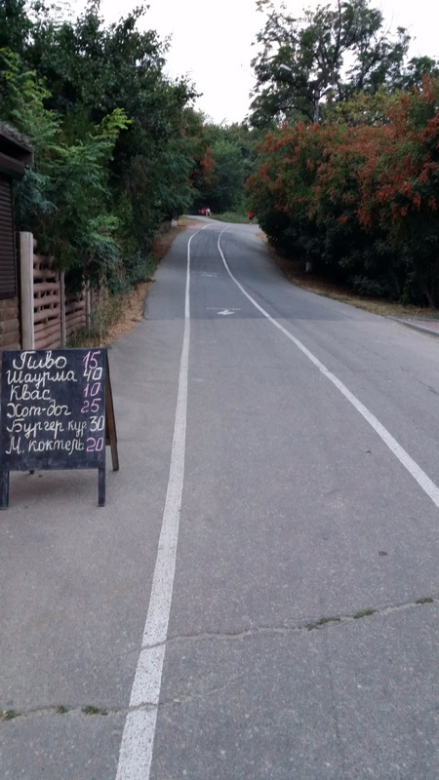 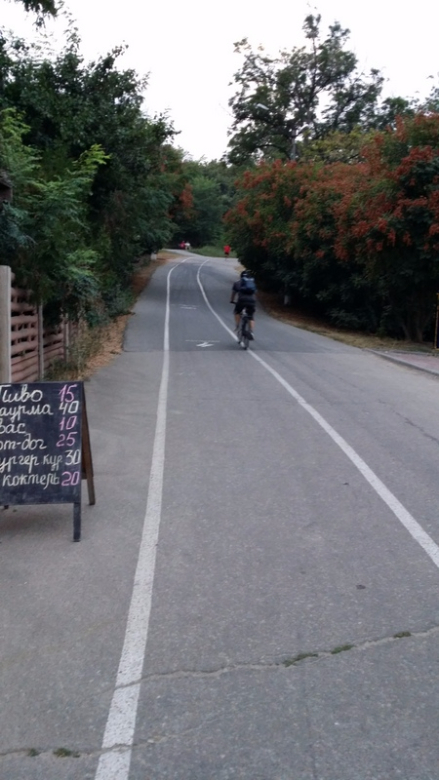 What I really found is a bike path “Trasa Zdorovja”. I also found it on the computer by satellite. It was already a route in 1960. Whether it was a bike path back then, I don’t know of course but some sort of keeping fit path. The “Outdoor Muscle Hangout” is a part of it. The path goes along the coast. Is always somewhat higher and in a type of forest. The relatively small trees stand far apart. Not a forest like Grunewald in Berlin. The forest stretches from the beach up to cliff to the first buildings. It was created together with the path. Now there’s a bike lane on the asphalt, similar to the one in Tarasa Shevchenka Park. When I was there I thought, it has to continue. Where are all the cyclists disappearing to? While there, as I put on my shoes and helmet, there was a man next to me doing the same and definitely not for 1 kilometer. The beginning of the Trasa Zdorovja must be up there somewhere. But I haven’t found it yet. The end is in Arkadia. But I was in the middle. All 100 m steps have been recorded. I’ve done 2,900 m. That counts from the inner city to the outskirts. The path is supposed to be 5.5 or 6 km long. 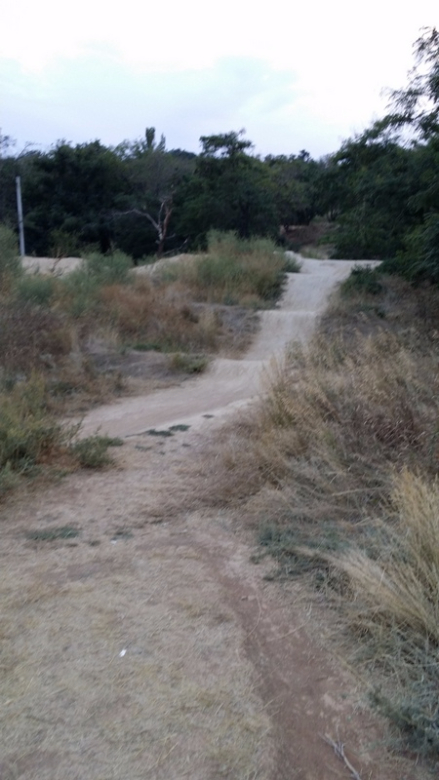 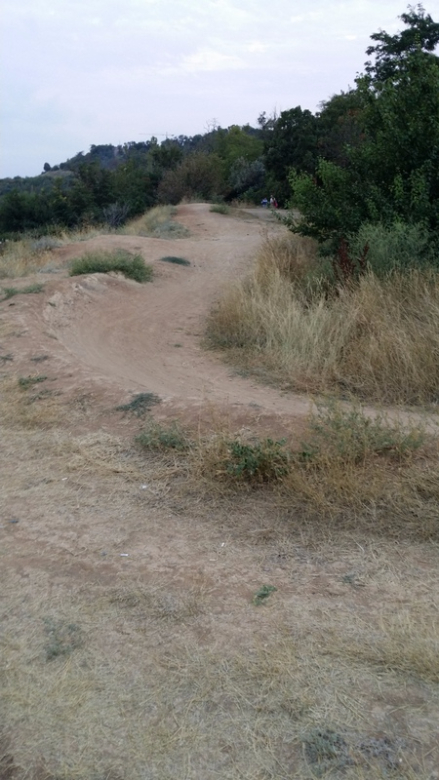 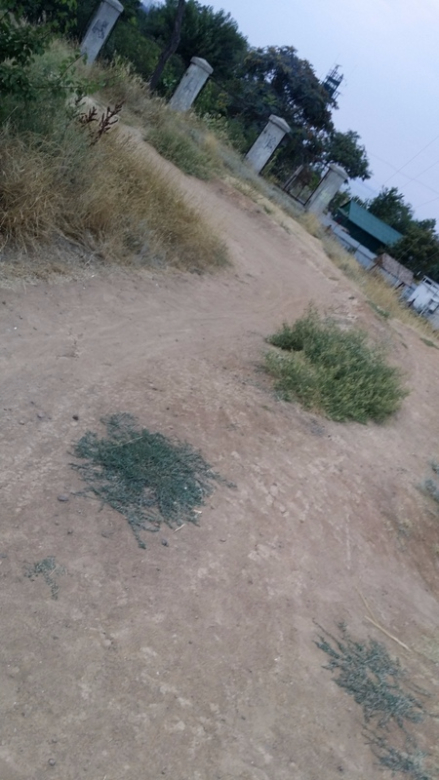 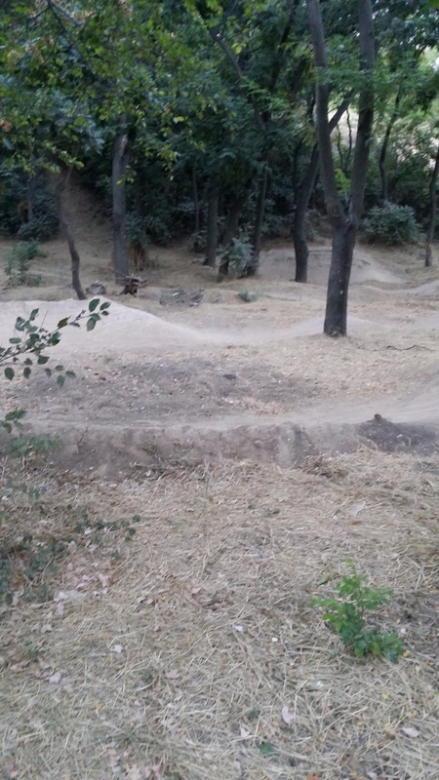 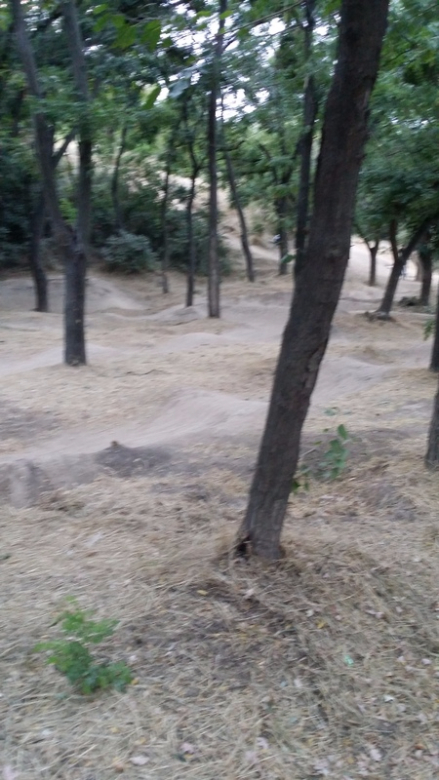 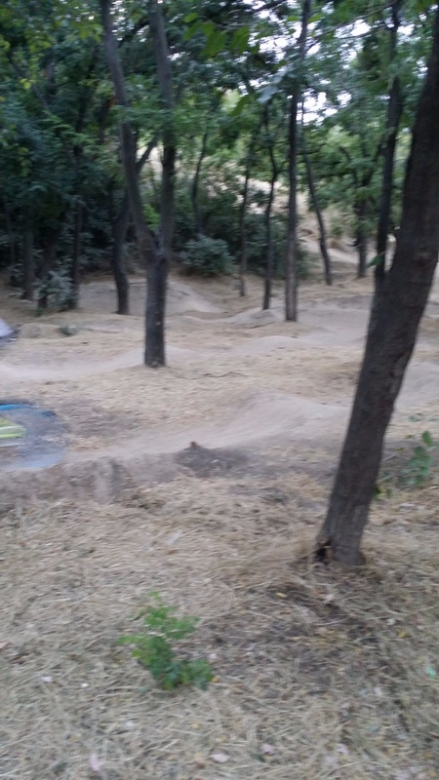 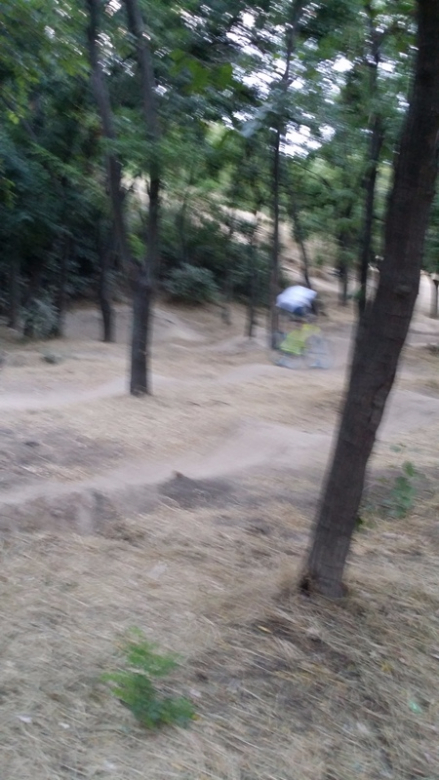 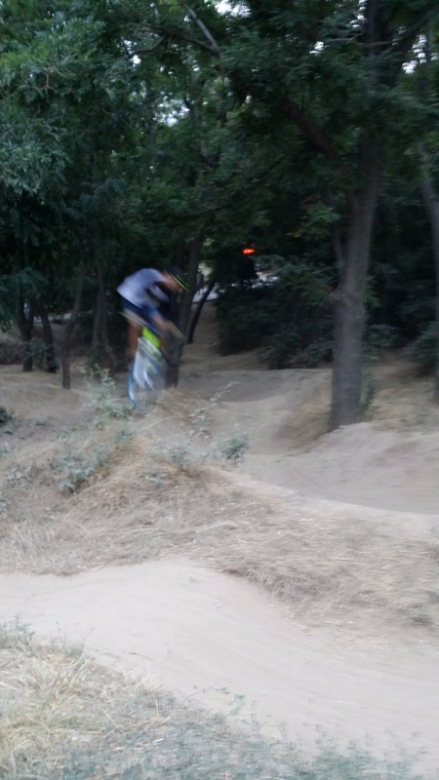 At the location where I was, youths had ridden their own mountain bike track into the sand in the “forest”. It’s permanent now. How long did that take? A few of them are speeding around there now. The best one can jump really well and is showing all the others what he can do. A girl stares admiringly. The 2 homies are not any worse but they always start riding together and then so stupidly, that they intersect other repeatedly and have to brake. That was the entire gang. The camera wasn’t loaded yet. I didn’t have it with me. The mobile was swamped. But I still tried. This is the first impression. I’ll go again tomorrow and get on my bike. There’s more on the path. 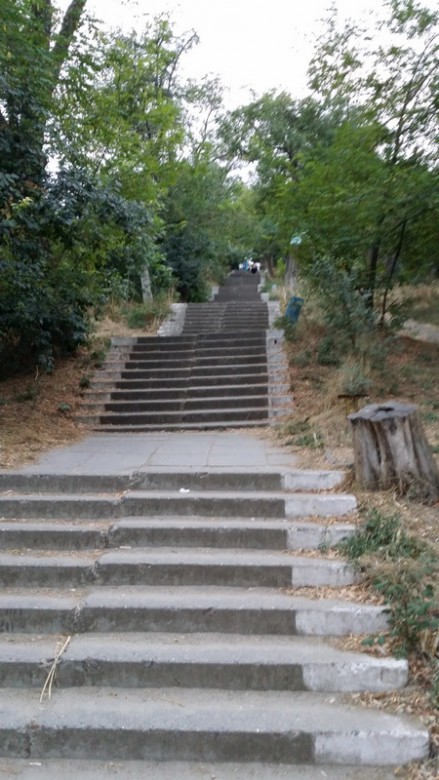 Between the beach and my car, the stairs. 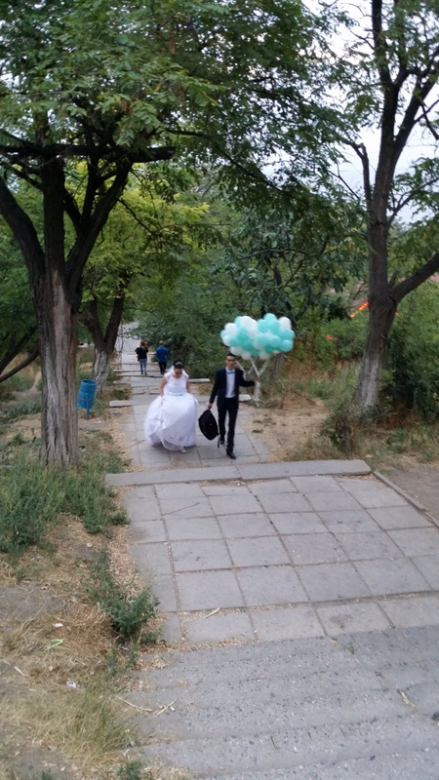 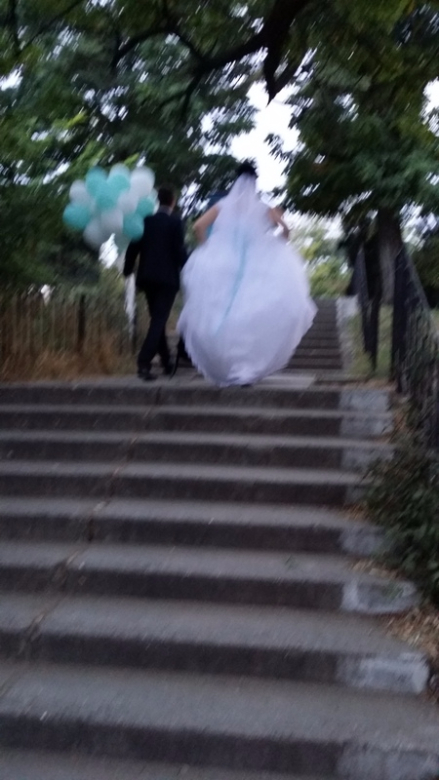 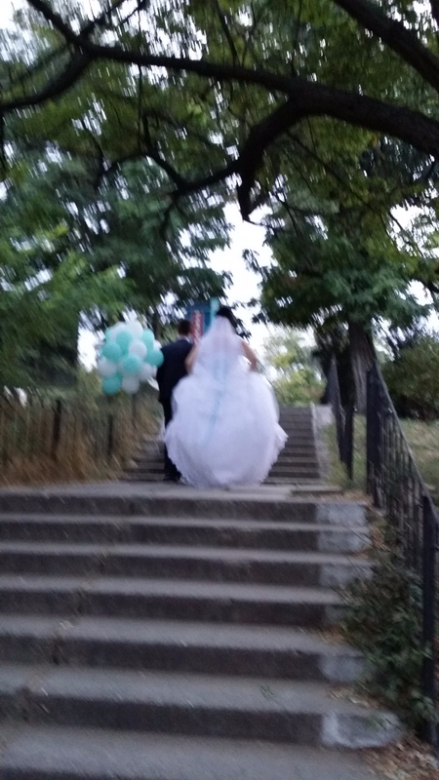 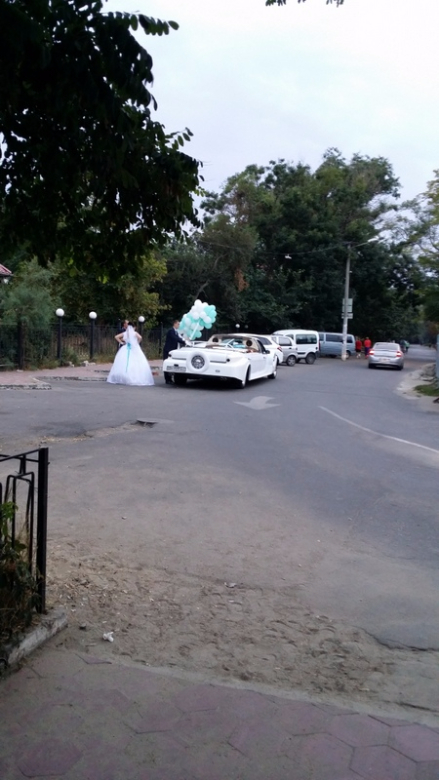 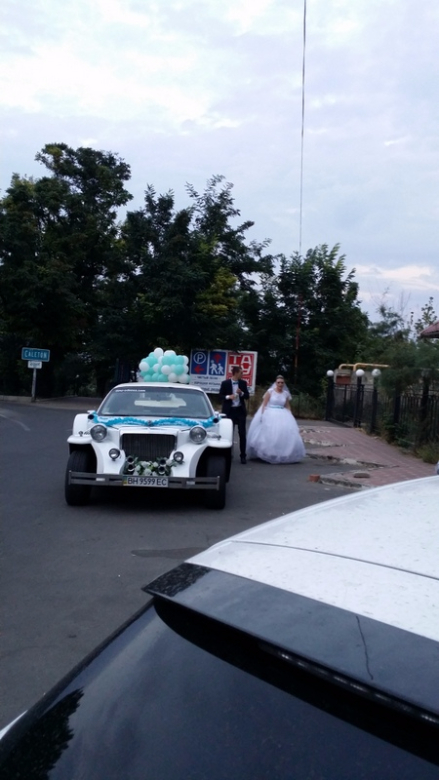 This 2-person wedding troupe ran by me up the stairs. A wedding actually only needs 2 but for a party with such a car and champagne, a bit sad. Or it was only the photo shooting.

The 1st photo with the new camera – blamed on a world-famous blogger, who just passed by. He is read on 3 continents. (Where’s the hat?)