Who writes about the weather? No one since the SDS! But I’m writing about it.

This morning I looked at the weather and saw: 8 a.m., 12 degrees. Wrong film. I’m in the south.
Now the time has come. The Doors humming in my head “Summer’s almost gone, where will we be when the summer’s gone?”. Yesterday evening it was already somewhat cool. Always shortly before the rain. It was stormy, wonderful air. I had left the window open for 5 hours. (No musicians outside!) Rumbling outside the entire time but no rain. There were no pre-noises to a major downpour, just harbor sounds brought over by the wind. I’m always shocked in the morning anyway. The street is wet! But then I realize again. It was sprayed by a cleaning vehicle. The hardworking Odessans clean their flagship ramp mornings from 5 to 8 a.m.? Anyway, when I walk over the colonnade at 10 minutes to 9, there are no more street sweepers to be seen. But that’s also normal in Russia. They’re up and around very early in the morning. Why? No idea. Only in winter there are also women shoveling away snow during the day.

I was defiant this morning and said, nah not for me. Just like every day, I set out with shorts, a t-shirt (with an undershirt, kонечно, of course. I’m an old man). With my knee socks, that always causes excitement here – they’re compression stockings but knows that. I can see how people, young and old nudge each other when I approach them. They’ve never seen anyone like that. The time has come. – In “Ashan” supermarket a woman asked me if her husband could take a picture if me and her. Please. The husband wanted one also. Henry, where did you have your autograph cards printed? It’s high time for me.

Odessa this morning at the colonnade.

Head covered, bag grabbed and off. I purposely walked along the colonnade. This is the morning greeting that Odessa has for me: a view of the sea with the morning sun shining on it. That’s the reason I’m here, to see, hear and smell the sea every day.

I thought it would be crisp here in the sea air but it wasn’t so bad at all. More like yesterday when it was supposedly 16 degrees. But what are the Odessa natives doing? They’re all wrapped up. As if winter has arrived. Good, jacket, a light jacket I can well understand. But coat, scarf, wool cap, one with gloves, winter anorak, hood pulled onto head. It a bit too much. Yesterday whiling away at the beach and this today. Honestly, aren’t you all slightly overdoing it? But all the sun-spoiled people from the south just freeze more quickly that northern men and women. We’re happy with 16 degrees and they go chop wood. 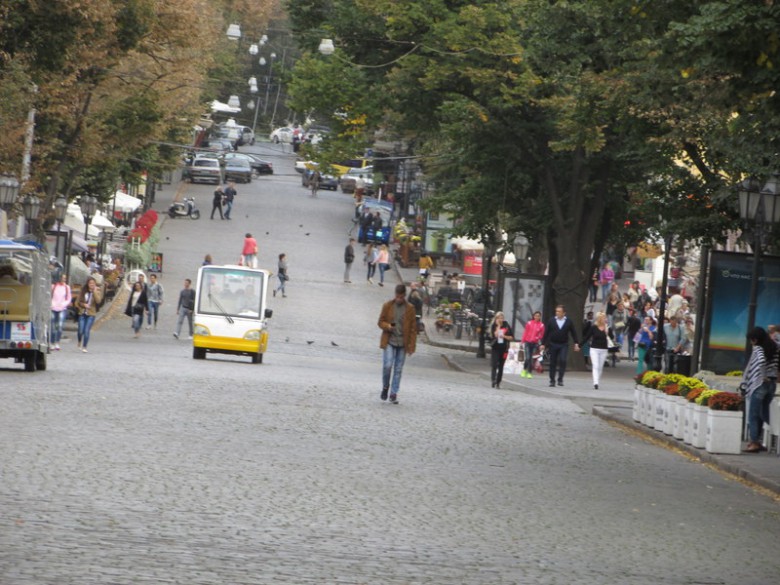 So en route I saw some women in long pants for the first time. At Tour de France Cafe, if I’m early I drink a cappuccino before class and today I was pretty speedy as I wrote‚. A girl asked for a blanket. She was already wearing a closed anorak! What do the poor people do in the winter?

During the day it was even 18 degrees. 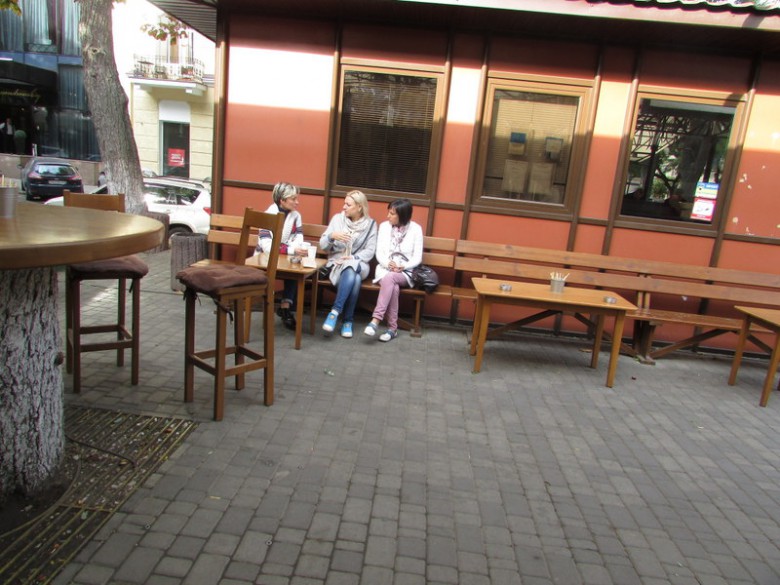