Tach,
Novij Rynok – The New Market
We weren’t only at the Apple Festival on August 19th. We also visited Novij Rynok, the New Market for the first time. On August 22 we then took a thorough look at it. In the meantime I’ve been there almost every day.

The New Market is not really that new after all. It has its beginnings in the year 1812. In the 1840s the first 2-story trading halls with open galleries were constructed based on a design by N.S. Kozlov. The most famous market in Odessa is the Privoz, which is next to the train station. I was there last year with Lilija. An acquaintance told us she doesn’t like to shop there because there are often bad products offered there. She has a vendor who she can ask “who has the best chicken today, etc?” but it’s tiring. A “Westerner” can’t really picture this anyway. Already the size, I think, 4 street corners, so not a square. Simply 4 streets wide. Let’s say the Winterfeld Market from Nollendorfplatz, the entire Maasenstrasse and yet a bit further of Glotzstrasse as wide as a square. That’s the official part. There are numerous halls and then covered stands, then stands again outdoors and some which are containers. Like the rings of Saturn (the planet), there are “wild” stands throughout the streets around the market and everywhere on each corner there are mamas selling whatever grows at their dachas. At all underpasses, on the steps, everywhere. Dogs and cats of course, a whole bunch. But the New Market is also an entire block. The “little one” is in any case about 200 x 200 Meter large.
Privoz is part of the sequence in the “Odessa 0” or “Near East Tour” in 2014. Will happen soon if I keep on like this. But now its the New Market. My landlady Olga says the same thing and that she has no desire to look for a parking spot there, which doesn’t exist anyway. At the New Market everything is somewhat smaller, cleaner, more open and there are parking spaces and it’s closer to the apartment.


The New Market is as large as the large Privoz, like every other large market here: there is a solidly built building, covered stands like we have that have to be set up and taken down with a covering on top.
The large hall.

To the right and left on the wall are large walk-in refrigerators. Not only meat but chicken, organ meat, also the quark, the butter lies around open all day, unrefrigerated on the table. The sun beats down from above. (Outside each of these markets, there’s a sign: “Salmonella welcome!”) I wouldn’t eat it. How would I know how often these products have been carried back and forth even if I come in the morning? That’s no guarantee that it’s fresh. The fish is laying on ice but stinks too much also. The cheese is in refrigerated cases like we have. Strangely enough, it’s the same in all the other halls I’ve been in so far.
The last 2 photos in the middle show the cheese case at the head of the long tables. The dead chicken belongs to the quark-butter department. See the large photo at the end. 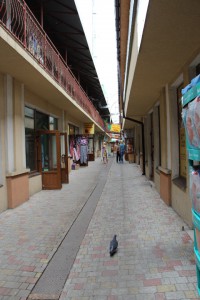 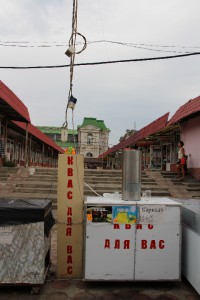 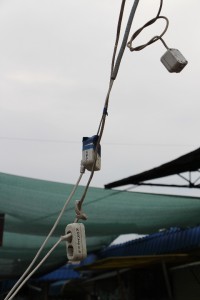 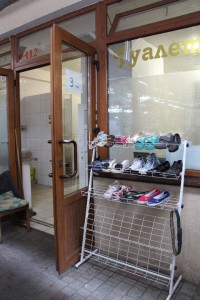 It’s not a shoe store, it’s actually the toilet. 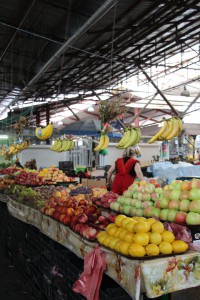 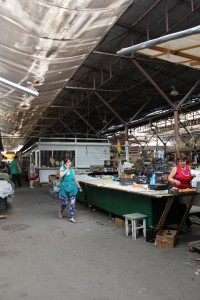 Maybe I should start somewhere else. More like what isn’t available at this market, or at these markets. Also in Russia. When you think of markets you think more of the Winterfeld Market, or of a natural foods market at some church. To be polite, it’s not like that here.

There are no cars here. Ok. But the rest… All types of groceries. Toiletries. Spices. School notebooks. Kwas on taps. Cafes and bars. Shoe repair, Remont obuff. (One of my first Russian words.) Watch repair. Today I was stunned to see that a man had an auto workshop on the outside of the market under the main building. Repairs are done on the street. Baskets, glasses, plastic tubs, electrical retail, shoes, clothing, children’s toys, jewelry, pet supplies. But everything always individually. Not one classic household goods store. Instead one place has ladders, the other one electric products. Saturday I was in a store that only has multiple sockets and multiple plugs with cable and lightbulbs. A store can be filled with that. There’s also furniture. And of course never ending “do-it-yourself markets” but there also, one place has paint, one has cement. They’re outside towards the street so everything can be loaded into the car right away. Sometimes those offering the same products are sitting in the same boat. And then suddenly, one is in another corner of the market and then there’s someone who should actually be with the others.
This seems chaotic to us and makes no sense. But there is definitely a reason why the second word in Russian for market aside from rinok is bazaar. And of course everything is really cramped.

It’s the same in the market hall closest to us in Petersburg. I enter and to the right in the middle aisle are the women offering quark. It’s not like it is in the supermarket with everything packaged. No way. On the tables there are pyramids with different types of quark (various levels of fat), so 40 centimeters high and they can be tasted. And then it’s put into a little plastic bag and not a cup. But there are 5 women next to each other, all selling the same things. Next to them are the honey girls. Four. When I still bought honey at the market, the got up when I arrived and offered their products. I found one type from the girl who was as sweet as the honey. Now the others weren’t angry. I just had to try their’s also. In their eyes, it also worked out every time. I then bought more. Couldn’t disappoint the sweeties.
Morjens 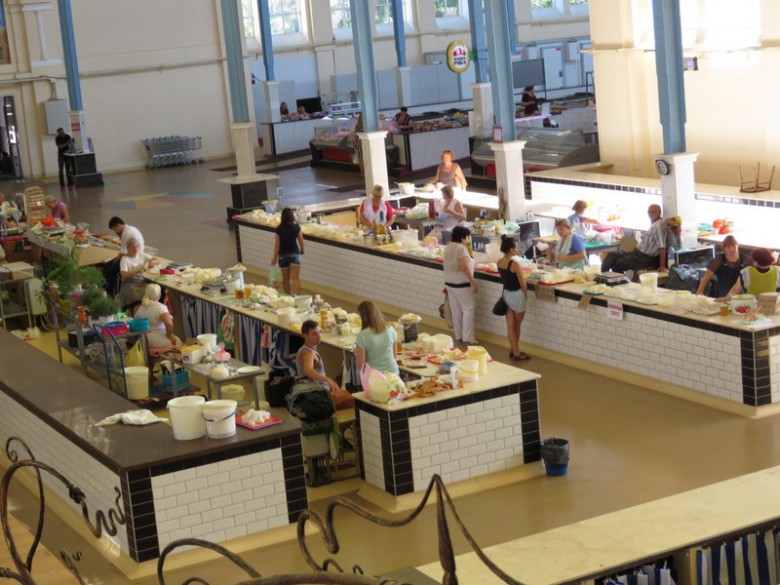 This can be seen well here: The women who sell the quark, butter. All also have 2/3 jars of honey. They’re all in one boat in the large hall. The hall is shaped like an L. The meat-fish department is not visible. It’s at the top to the right. – If you look closely, you can see a dead chicken lying on each corner!