In the first section I told you a bit about the markets in general and what’s available with lots of sample photos from the New Market. Today I’ll be more specific.

In essence great: but somewhat inconceivable for us Westerners, that in some stores, noodles, rice, lentils, oats and similar items are sold from open sacks. Inconceivable because everything is always standing on the ground. In the dirt, even if there’s sometimes a palette in between or the cookies are covered with foil. It does shake me up. It’s self service so everyone puts their hands in there. At the most, the vendors weigh the goods and hand over a bag. But that’s only for the most inexpensive products. That’s for example for pensioners or for sugar to preserve huge amounts of fruit from the dacha, requiring tons of the stuff. We don’t do that. If I need more, I buy 10 packs of the least expensive flour. But here 2 things are unbelievably cheap: time and labor. This beats the kilo packed products.

Please give me 5 spaghetti.

But the same is also true for sweets. Some shops/stands have individual candies. You can mix your own or buy your favorites. The same also for cookies. (e.g. very normal butter cookies.) Absurd to us. Who weighs their butter cookies if the least expensive no-name product on the bottom shelf can’t be underpriced. 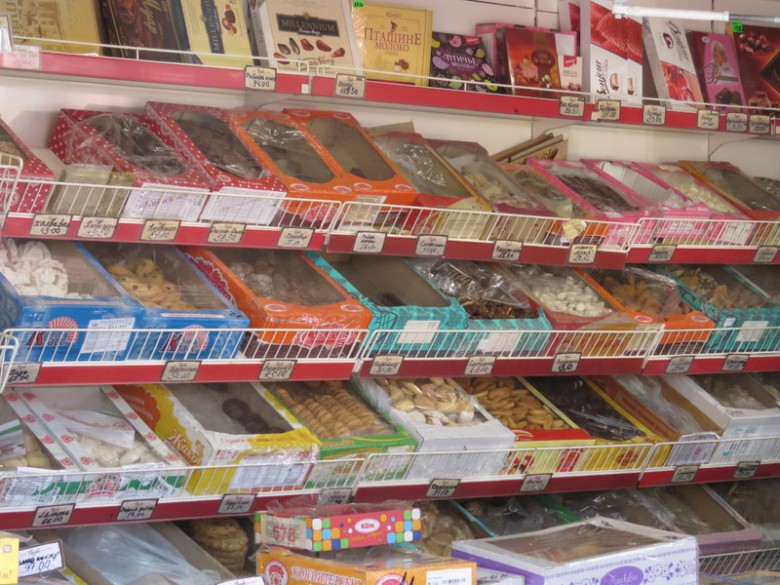 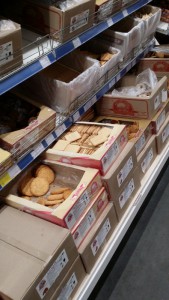 Even more disquieting is the fact that these products are offered the same way in really large supermarkets (Kaufland, Real) as well. A bit like a Harribo Bar, but in these stores the dimensions are unbeatable. There are aisles of selections and the containers for pulses, noodles etc. are taller than me. It is really astonishing. It’s also the case for nuts, sunflower seeds, lentils etc. And in the supermarkets there is also frozen fruit, vegetables, shrimp, or pre-made pelmenies, pirogies etc… On the other hand, it wouldn’t be offered if it weren’t succeeding.

There are scoopers for self service everywhere. Fill up what you needs. There’s always trouble if pictures are taken in the supermarkets but your man in Odessa took a few secret photos by being patient and completely innocent.

The candy, no problem. They’re wrapped. The child “is playing” in the open food products. The container with the red shovel in white, that’s flour. The hand seen stirring the sugar belongs to an Ashan employee. He is smoothing out the sugar so that it looks “nice”. The photo of spices is next to my “selfie with sunflower seeds”. Coffee and tea are also sold like this. At least I’ve finally seen disposable gloves at Ashan and Fozzy. But they don’t have to be used. No one complains. To the left of the frozen vegetables, with the yellow scooper, those are French fries. Small photo, red scooper, those are kotletti, funnily enough not cutlets but meatballs. And finally, the completely sticky waffles.

The food products inspectors in Germany would all faint.

A look at Fozzy:

The first barrels are zwieback, then there’s rice. The pictures next to the cookies show sugar and buckwheat. The woman in the red pants packed oats with her husband. The woman in the last row is almost falling into the sugar.
Not to ignore the fish faction, fish sticks included.

Yesterday I was in a supermarket in the city’s priciest shopping center, There was loose frozen meat available. I think pork and chicken. It was all frozen together in clumps. A man broke of the chunks he needed by hitting the clumps against the edge of the deep freezer. Whoever enjoys the taste.

Then there are stores which have 4, 6, 8 types of beer on tap. But there are no glasses. Plastic bottles for filling are provided like at Zille in the past, and then take it home. Wine is sold like this also. I brought along a bottle of Moldavian wine from the Metro. There were 6 kinds of wine there for self filling. Sometimes I do that with Kwas in Berlin at Stuttgarter Platz. But I bring my own bottle. Lilja took a picture of this. When we were in Odessa in summer 2014, I discovered a stand with very good kwas which I went to a few times and had a bottle filled for the hotel. Even soda is filled by hand. (There really is also classic soda here in Ukraine, Moldau and Russia. I don’t mean Fanta or Seven Up and also not juice. Lemon and raspberry soda instead. Pear soda is very popular. Often they have their former Soviet labels). The large supermarket chains also have such stands for beer, wine and soda. I had to expand my own horizons. Beer and wine from plastic bottles? Maybe I’m too squeamish. Most beer is available in plastic bottles here. But wine mainly in glass bottles. In TäTäRä that was “secondary raw material”, It’s only rubbish here. Maybe Trittin can re-start his career here as The King of Reuse.

A typical stand for filling at a small market outside Odessa.

First and last photo classic sodas. Filling station at Ashan: Beer, wine and soda. The shelf is the vodka shelf! The entire side, only vodka. Next to it the filling stand at Fozzy, with kwas. German beer varieties at Fozzy. Only what I could capture all at once. The shelf is one of three!! Beer shelves. 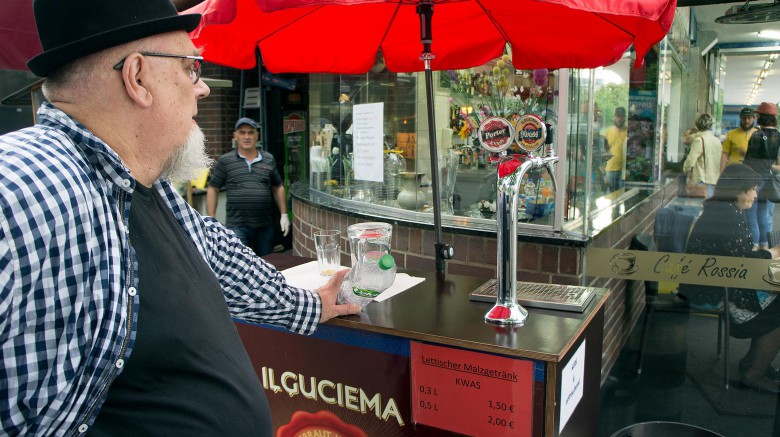 Thomas getting a bottle filled at Stuttgarter Platz in Berlin füllen. Kwas from Latvia. Delicious!