Odessa II – To Sea with the Cat

Together is nicer. Not always true, but often. That’s what I thought while taking my daily walk on Trasa Zdorovja along the sea. I passed by a woman with a bag, with a cat nestled onto her back; all on a bench directly at the water with a view of it. The woman also reached behind to check if the cat was still there. With the bag. At first I thought she’s taking the cat to the sea. Of course I took pictures. This went well; it was still light out and they both sat still. 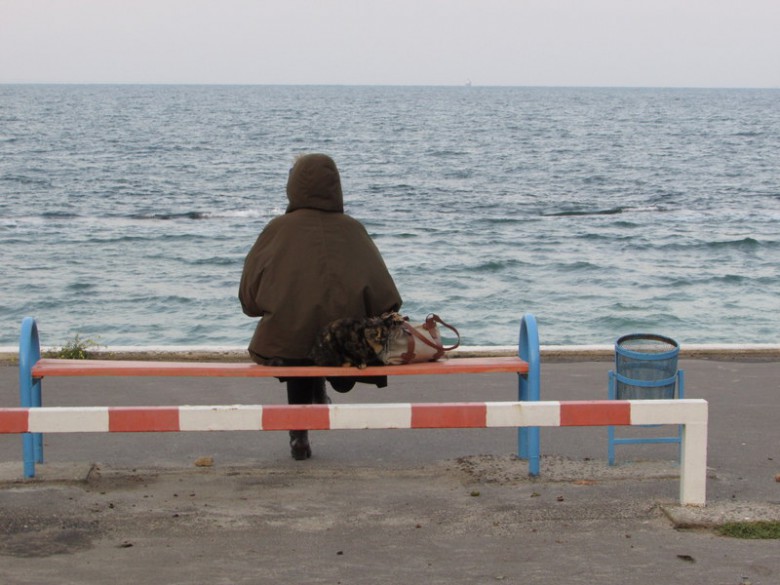 While continuing my walk, I again thought of a story from Kladow. We lived there at the time in the Finnish settlement. Named after the building style of the row houses. Friends of my parents had a female cat or tomcat; I no longer remember and I don’t know its name anymore either. The two of them went for the same stroll every evening before bedtime or after supper; I don’t know that anymore either. But what I know is that their cat went with them, accompanied them. It walked parallel to them at a two-meter distance, every evening. I thought of that when I saw those two today. There were still there when I returned. They had changed benches. I hurried up and stood still in order to take a picture. The woman had gotten up and wanted to leave. Of course I definitely wanted to take a picture of the cat getting into the bag. To my surprise, the cat did not get into the bag. It remained seated as if it didn’t want to leave. The woman was 20 m away and turned around. The cat went towards her, walking sideways, one step backwards and one step forwards, the way only cats and little kids can trip someone. It made me remember the Kladow story again. I let both of them walk ahead in order to take pictures. Then they disappeared. Sometimes the coins come to me in pennies, as my mother always used to say. So I thought, quick, catch up to them so you can take pictures of the cat getting into the car.

I was surprised to see them standing at a dilapidated green area. The cat next to the bag. I thought, now it will happen. But no, nothing. I took a few more pictures and then went further. Then I mustered up all my courage and returned: U menjar est vapros (I have a question). Then we spoke in English (she) and Russian and English (I), both at the same level, if it can actually be described that way.
Whether the cat gets into the bag, if it’s her cat. No, the cat doesn’t get into the bag and it’s also not her cat. The cat lives here at the beach. Whether I like cats. Ja otschen lublu koschek (I adore cats), our entire family loved cats. Na, that’s nice. No the cat doesn’t belong to her; they’re friends and she comes to visit the cat regularly. Then they sit on the bench, three or fours days a week.

I forgot to ask how the cat knows that she’s there. But then I thought of a Birr cat story. We lived on the fourth floor in the city, in Schöneberg W 30, on Habsburger Straße. Our city tomcat was called Inky. After one of Felix the Cat’s two nephews. That was a comic book my mother always read to me. Before we heard my father coming up the stairs, he coughed a lot because of smoking, like I did later because of smoking; the cat sat at the apartment door and expected him. I don’t know anymore how but we found out that he went to the door the moment my father put the key into the building lock.
So I imagine that the cat hears her friend when she walks down the stairs to the beach. Morjens 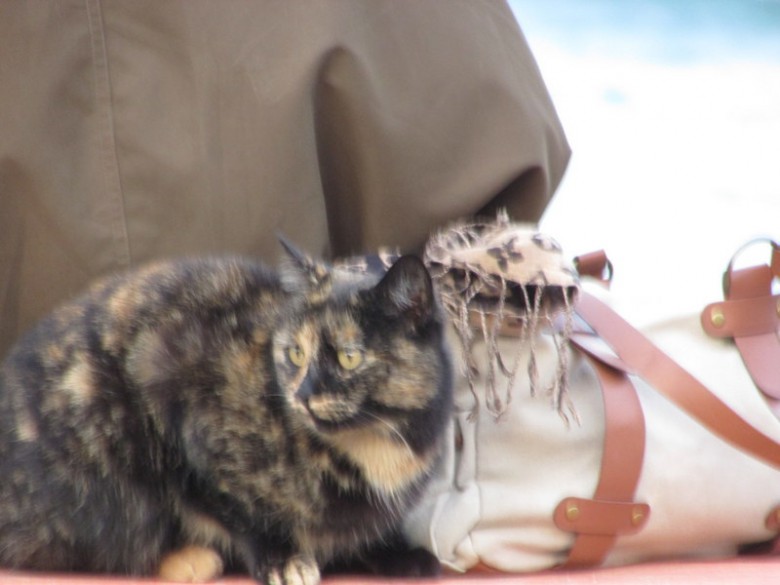 PS
Sorry for this type of photo in the second part. The camera is not made for movement and twilight. I kept the best ones although they had to be double exposed in order to make a least a small impression. I swear: I’m buying a camera that does everything. Yes, it annoys me too. Such a nice story and then, hardly any photos.