I’m always surprised how little we, okay I take in of our surroundings.
During the first visit to the New Market Lilija and I passed a stand with one type of bread, meat and kartoschka filled pirogies. That’s all. The man looked helpless with a small table and not much to sell. He didn’t really fit in there. I didn’t care because the pirogi tasted even better, potatoes with onions. It was warm, almost hot and simply delicious. I think Lilija had miaso (meat). I don’t know anymore. (No nothing at all. I wasn’t hungry yet – always missing the best). And a “pal” again: good day, comrade, everything okay? Goodbye.
I go by there every time I visit the market because the pirogies really do taste good. Although the selection is small, not all of it is always available. Unfortunately. I thought he does it like the vegetable lady with the bread: somewhere nearby there’s a mom who spends all day at oven and always replenishes his stock. Today I was there and he has something new. Looked a bit like gözelem (griddle baked Turkish pastry). Green-white in dough, clear white Brinsa (sheep cheese) and the other thing, green? I didn’t understand the name. It wasn’t dill. I know that word. But it was hot and fresh. I bought it and went to the kwas stand,where I order a half portion and will have a snack. (I haven’t found out what the green thing is. New flavor for me. Unfortunately, it overpowered the Brinsa a lot. Was very dominant.)
I want to pay. The man gets up and I see a type of hood. And I ask him what it is. He goes over and removes the cover and I can see inside. It’s an oven. Mom indeed. He makes it all here himself. Direct at the market. And I’ve stood there already 6 times and not seen the thing. 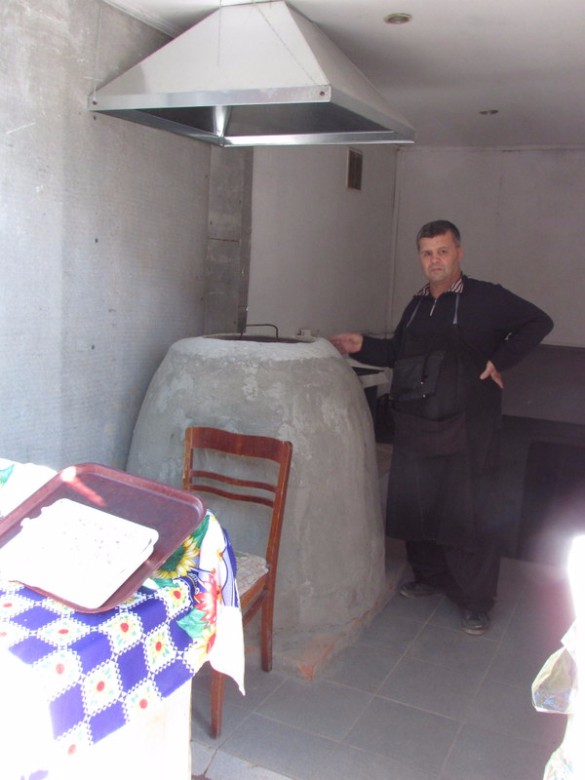 His pride and joy. I think he built it himself.

Lilija helped me to find out what the thing is called: Tandir. It’s a charcoal-heated oven. The tandir is filled from the top. First with charcoal and then with whatever will be baked. The coals heat up the oven for 2 hours. Then a tray is placed on the coals and baking can begin. The oven is covered on top. All peoples have similar tin flatbreads that they place on an oven wall for baking. Meat and chicken can also be baked in it on a spit which is placed in the middle of the oven and doesn’t touch its wall. The most well known dish is probably tandoori chicken from India. And samosas are baked there also or pirogies which are pastry pockets as well.

On Friday I couldn’t react anymore. While driving away from the market I saw something from the corner of my eye. But no parking spot, two cars behind me and a bus in front. So I returned on Saturday. Parked directly across. Just finished when I noticed how the man takes something out of the oven. I rush over, photographing while walking and … too late. He already had a suckling pig and chicken ready. Unfortunately, all the spits were also already removed. I bought 3 bread rolls (3 loaves of bread??) and he served me an original Georgian soda: apple with orange. Tried it, not bad. 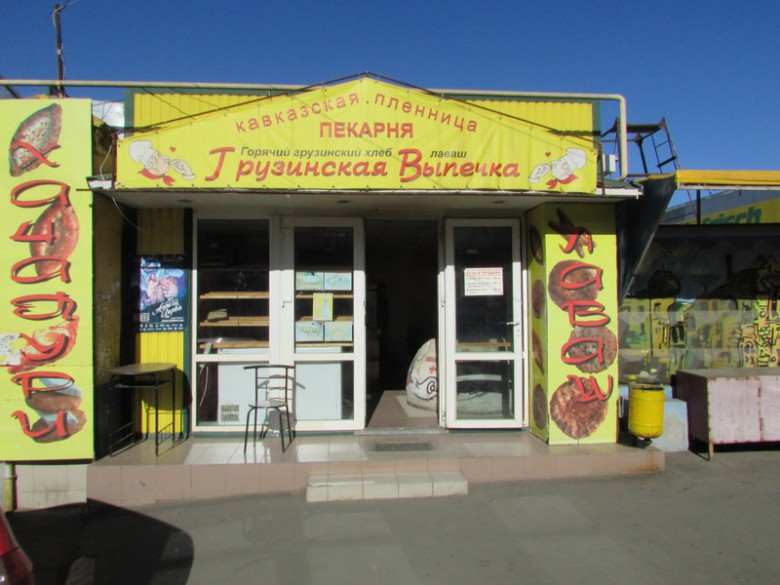 The Georgian shop with a tandir. The door to the street. The oven can be seen behind the door.

The little ship is called schotis puri, although it’s “only” bread. Tastes like Turkish flatbread. The first round bread is called chatschapuri. It’s filled with cheese called suluguni which is slightly sour. This is a type of snack. Of course once again: There is a little rounded ship, a long ship and and sometimes an egg in the middle and, and , and… Every village makes it. Each family somwhat differently. It’s all baked in a tandir.

This oven is very widespread: India, Iran, Iraq, from eastern Anatolia to eastern Syria, Caucasus, Central Asia to western China. It’s also found in Africa. In southern India it’s an essential part of kitchen equipment. So many countries, there are so many models. Clay, walled in, set in the ground, on a tripod. There are even electric ones now (how silly). 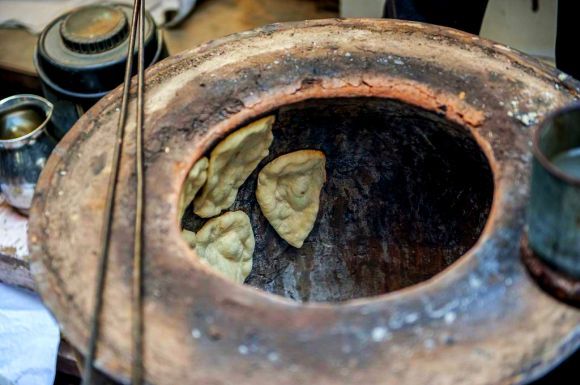