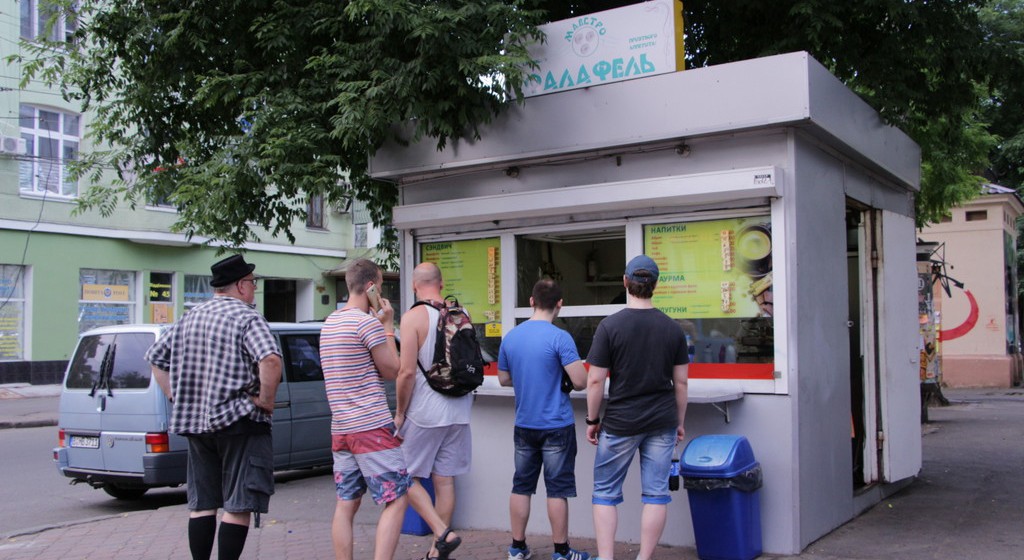 
Everyone knows: Lilija loves falafel. Aleksey from Odessa told me about the “best” falafel place in Odessa. I nicely waited until Lilija’s arrival to test it. That was the third falafel I tried then in Odessa. It was time on Saturday. We were at the sea, then shopping. On the way back we looked at a constellation of monuments for seamen (see: ). Then to the falafel. “Surprise”, as the Russian says, for Lilija. And I was hungry; that too of course. The place is at the street corner Preobrazhenskaja/Troitskaja. Expanded center, “downtown”, as Aleksey likes to say. While driving by I always saw a horde of customers; should be/must be good. The place is called “Meistro Falafel”. Enjoy your meal is written in Ukrainian and Russian on the sign. We’ll see. 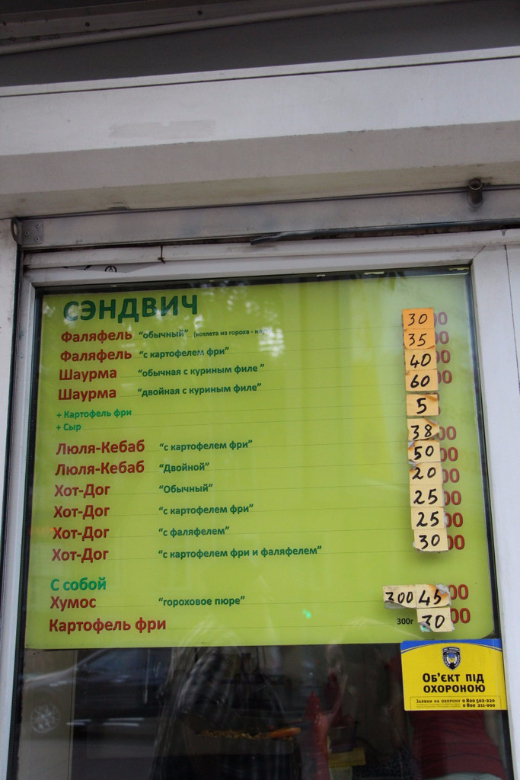 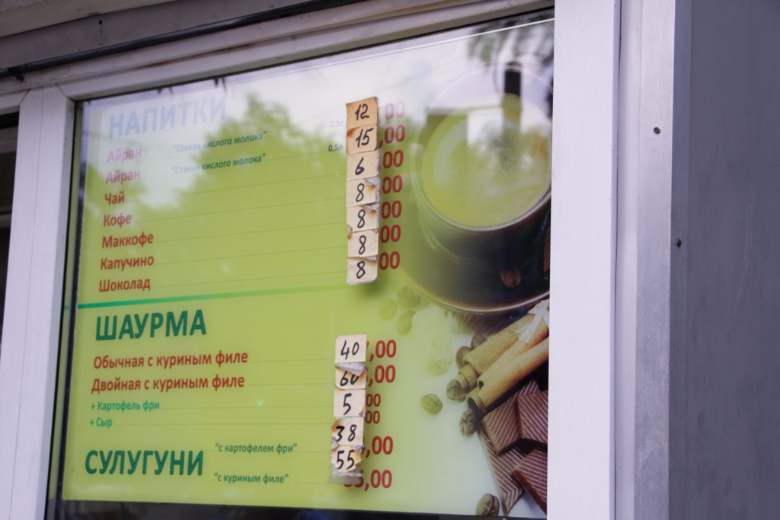 The menu is manageable: Falafel, shawarma, durum, hot dog (Xoт дог – I love this word). With extra variations: Traditional, with potato quarters (not French fries!); double the meat (chicken); extra potato or humus (chickpea mousse). Beverage: Ayran, tea, coffee.
Because it’s someone Georgian, there’s also a Georgian speciality on the beverage menu, probably because there was still room: Suluguni, a sour cheese; available as a roll with potatoes or with chicken. 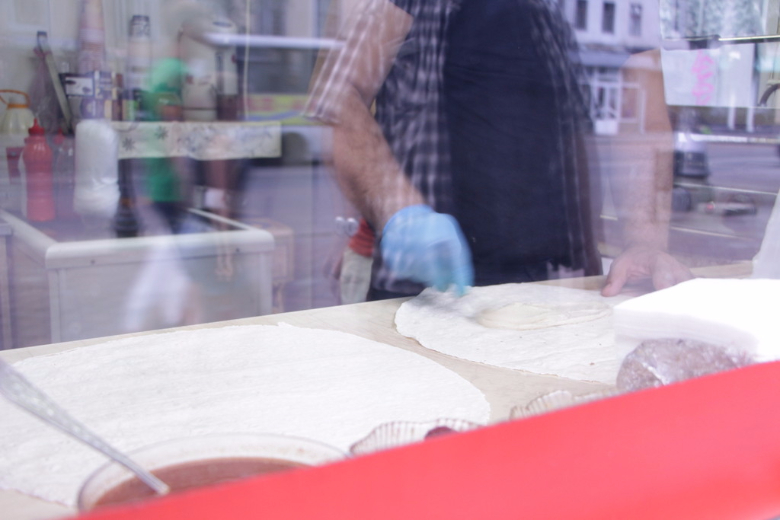 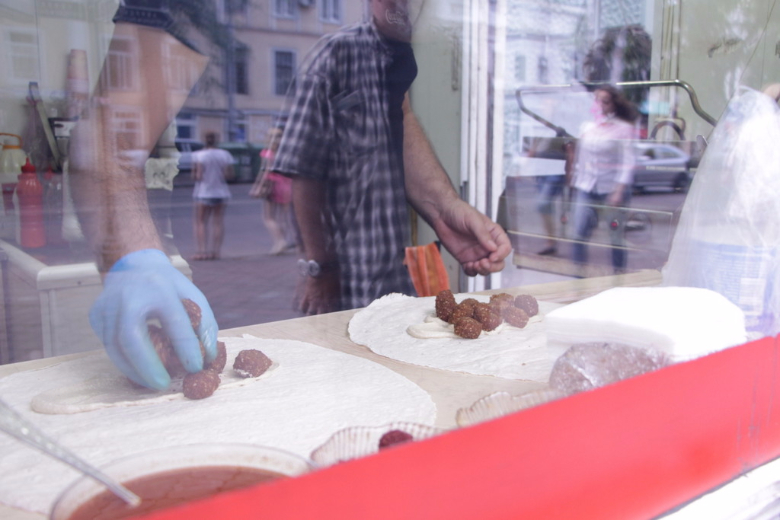 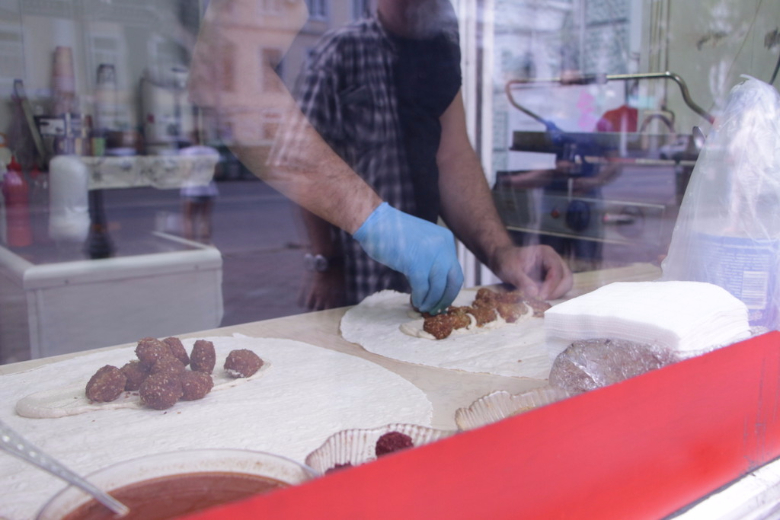 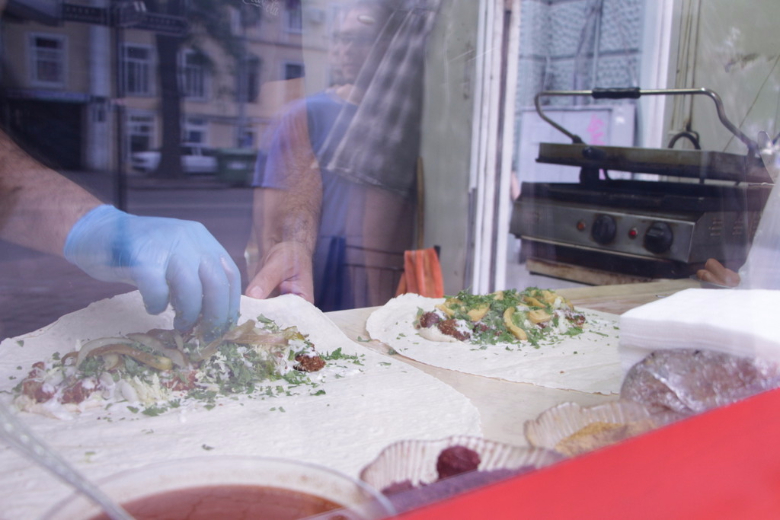 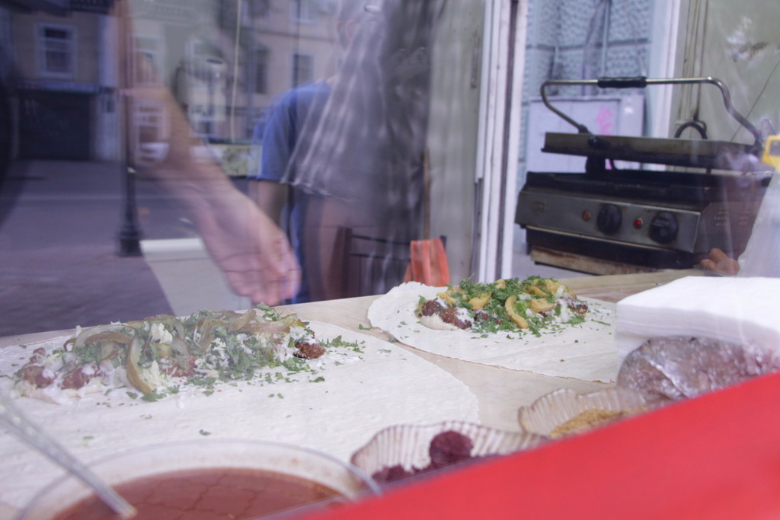 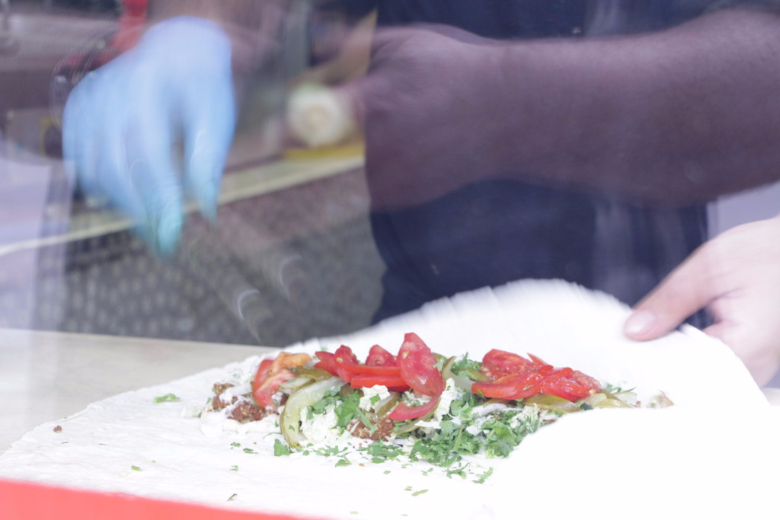 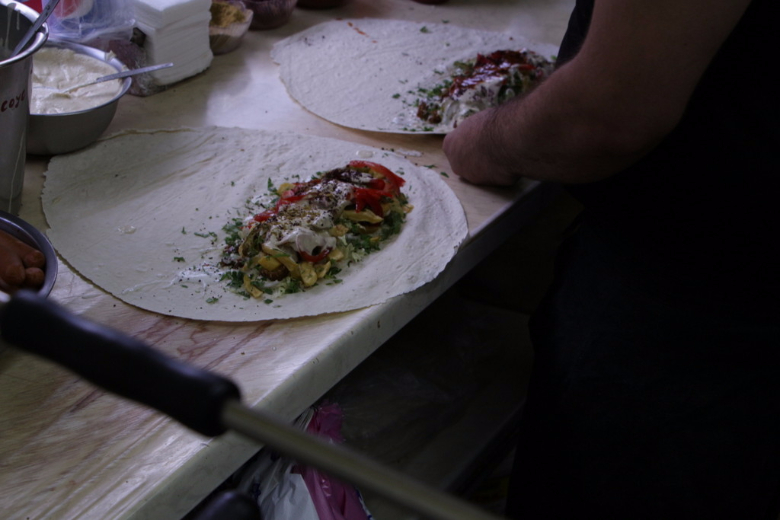 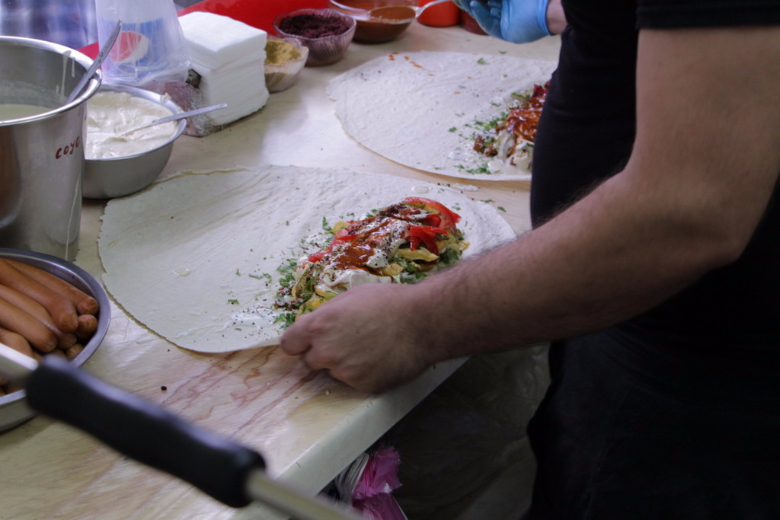 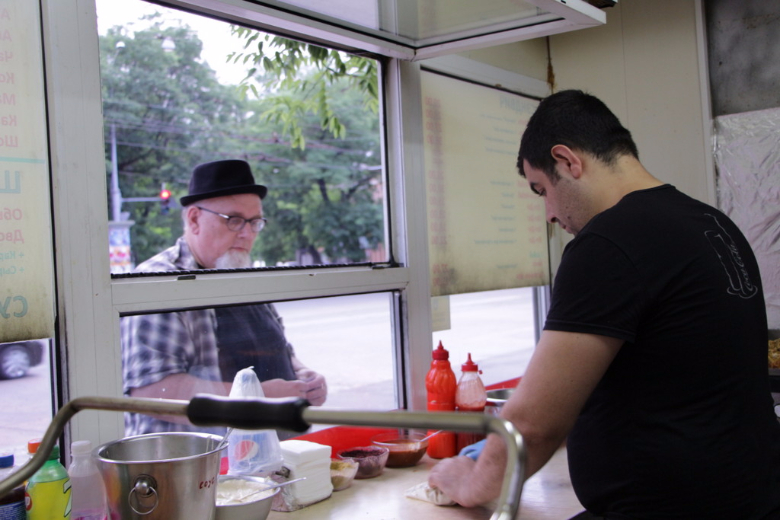 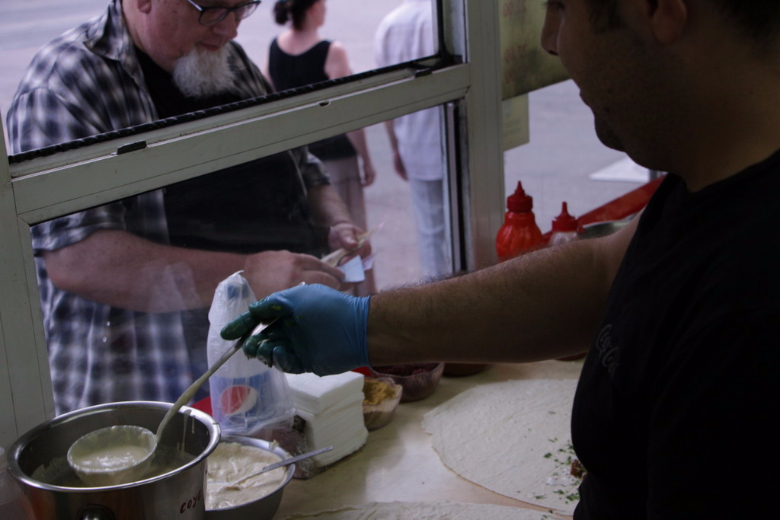 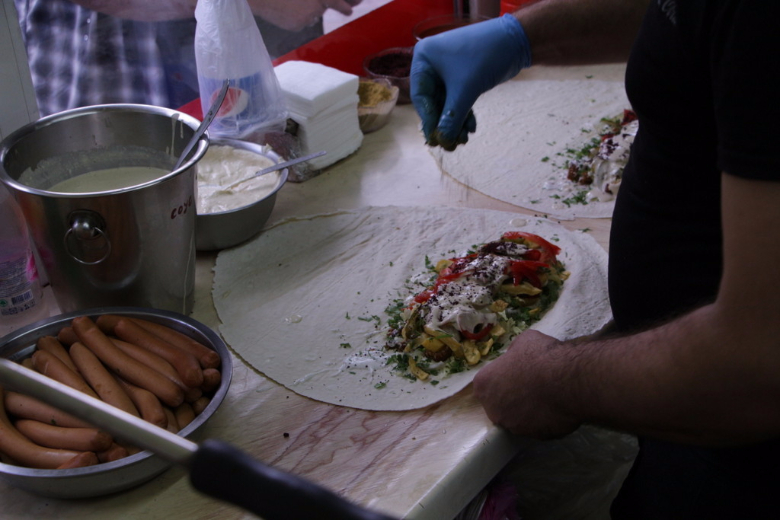 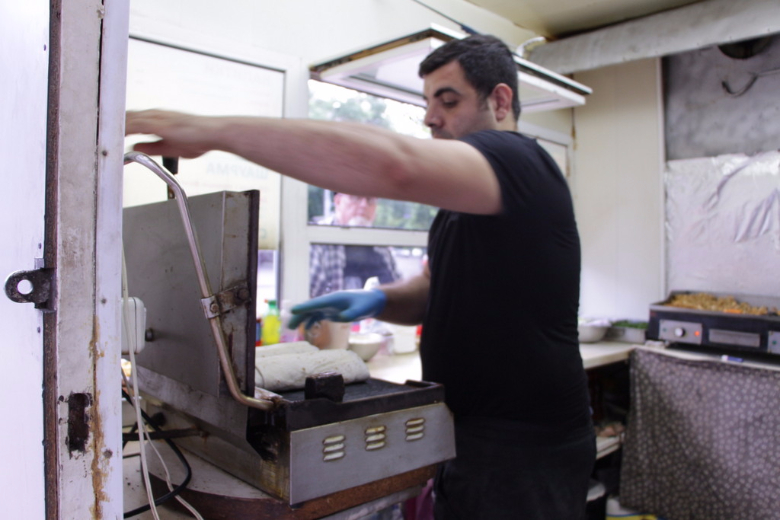 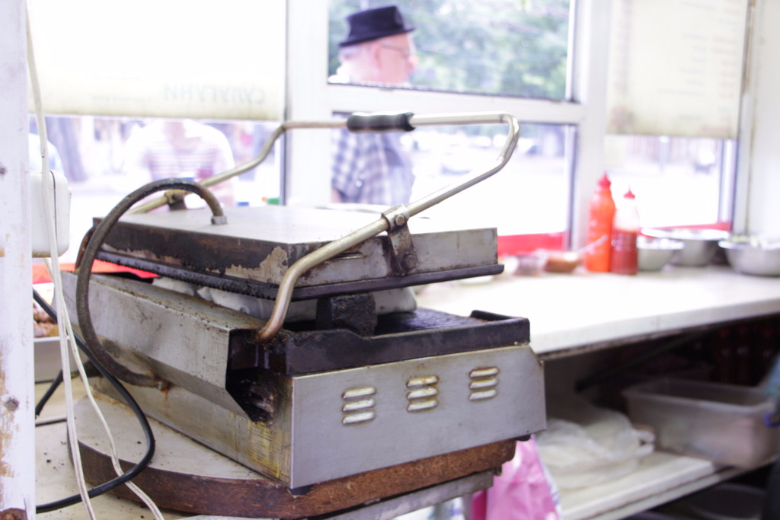 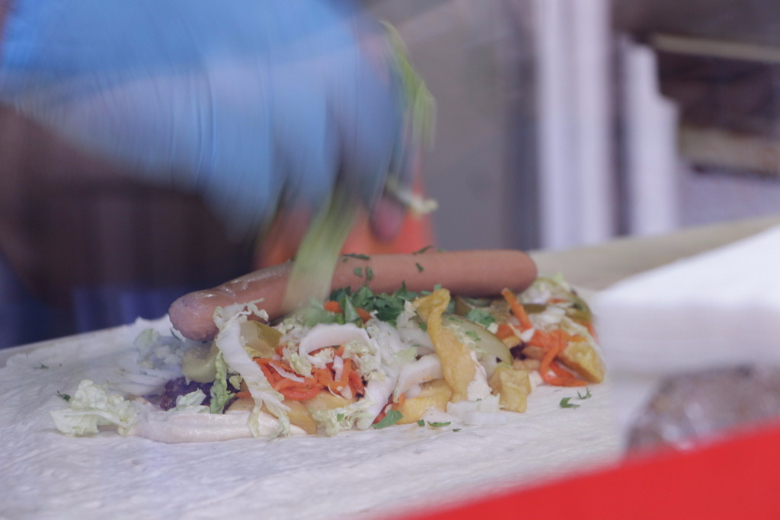 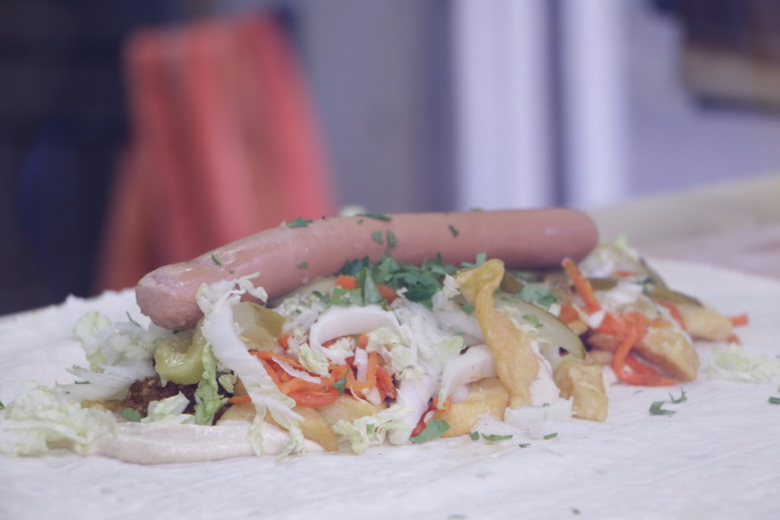 The basis for all the dishes is the same. Everything is placed on thin pita bread with fresh salad from white cabbage, tomatoes, pickled cucumbers, tomato sauce, a white sauce and a layer of humus beneath. If requested, one can also have adzhika (a spicy, traditional sauce from Georgia, which can be bought in homemade form from many stands at the market. Both in the Ukraine as well as in Russia; it’s known and widespread. The factory-made version is also available in supermarkets. Something similar to harissa). Then a small package is folded and warmed up in an electric table grill. Then the falafel is placed in a plastic bag, which is open at the top and there’s also a napkin. On the very top there’s a glob of humus. The sauce leaks through the thin bread, the plastic bag prevents a mess. 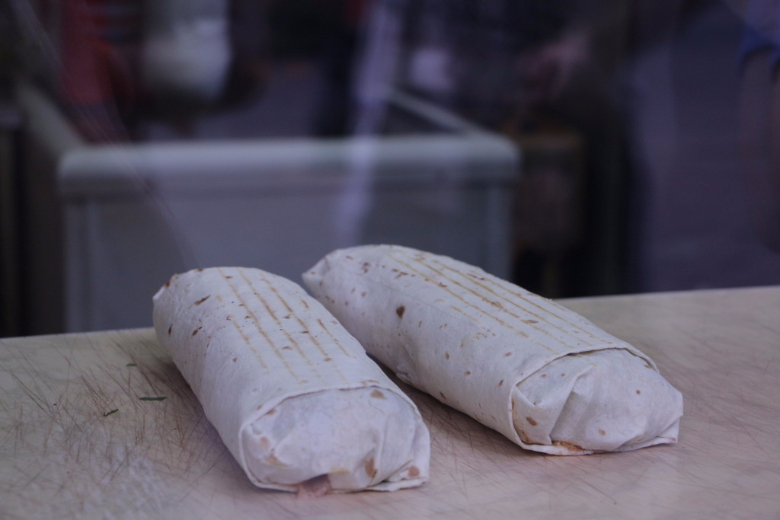 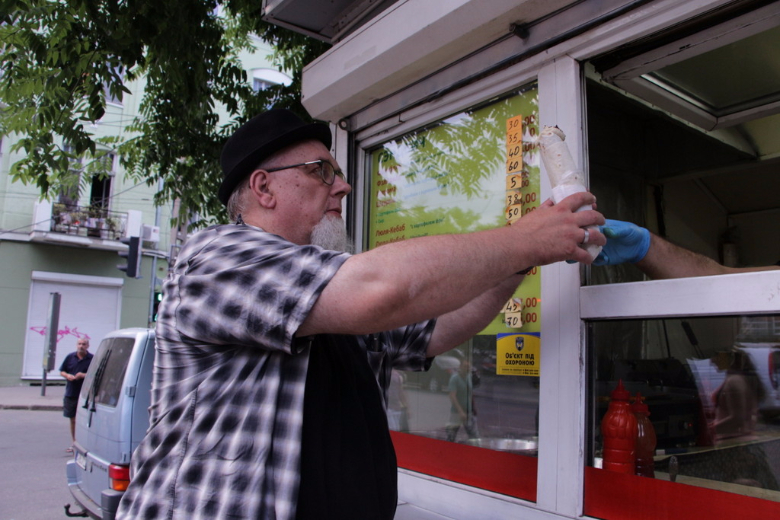 Lilija had “traditional”, I had it with potatoes. How did it taste? Good, we both though very good. Recommendable. Because of the different bread and because of the other sauces and spices, it also tastes very different from what we’re used to in Berlin. But that’s not meant to be negative. Whether it’s Odessa’s best falafel, as Aleksey says, I don’t know, but it’s very good in any case. Other countries, other falafels.
Morjens 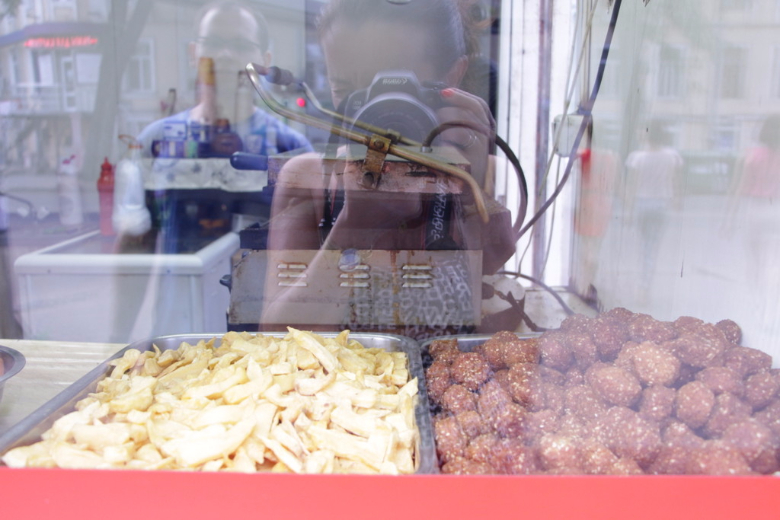 All photos by Lilija Birr-Tsurkan. (She took the photos, which is why there is no photo of her yet again)


One response to “Birr Testet – Meistro Falafel in Odessa”