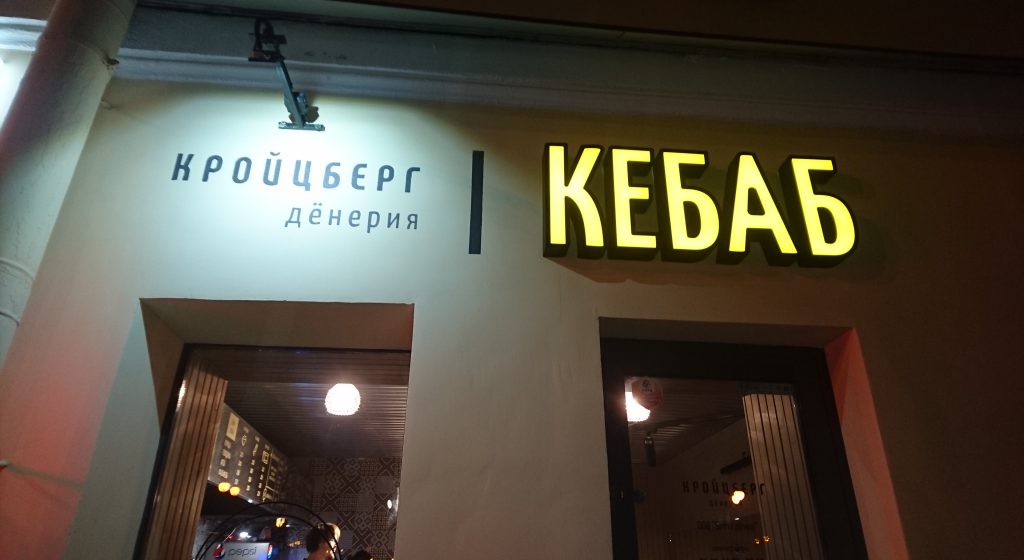 
Today we have a surprising fast food experience from St. Petersburg, a kebab shop. And? Because there’s at least one on every corner in Berlin to be honest. They’ve become sort of a pain now on our streets and in our noses. What could be interesting about that?
Lilija had told me something about Kreuzberg, and they also have a vegetarian burger. And on the way from the fortress to the car she said “that’s the shop that I mentioned”. I no longer knew what she meant, only something about Kreuzberg. Today we wanted to drive through the city as testers anyway and, also to pose next to monuments. So at the end, off to “Kreuzberg Döneria“, that’s the shop’s name. Something that would sound forced in Berlin, is forward looking here. Kreuzberg is hip.
She asked the first time why the shop is called Kreuzberg. The answer: That’s a district in Berlin. Nah, who would have thought that? We didn’t get any further today, did not penetrate this secret; we simply forgot to ask again. – One might think, a Petersburg native was once in Berlin….
And Döneria, burger? “That’s what I meant, doner kebabs aren’t burgers”, Lilija said. I should try that, it’s vegetarian after all.
So, what’s available? Four standard doner kebabs and salad. Two different types of bread. Drinks: no kwas, no non-alcoholic beer. But Club Mate, because we’re in the ghetto in Kreuzberg. But that’s fine, I now have one shop in Odessa and one in St. Petersburg where I can get Club Mate if I truly need it. 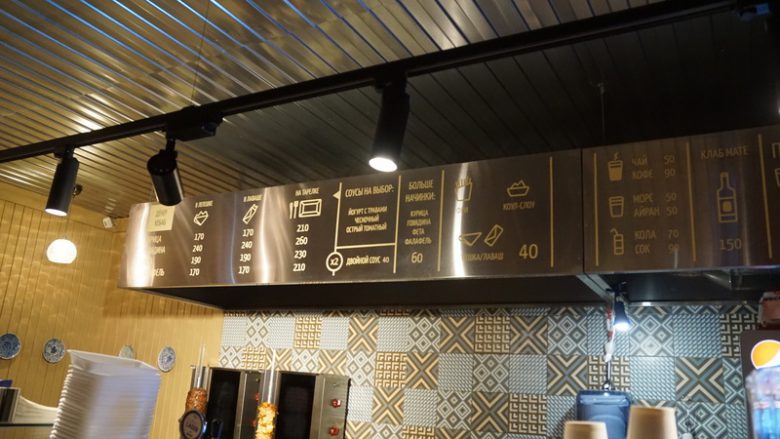 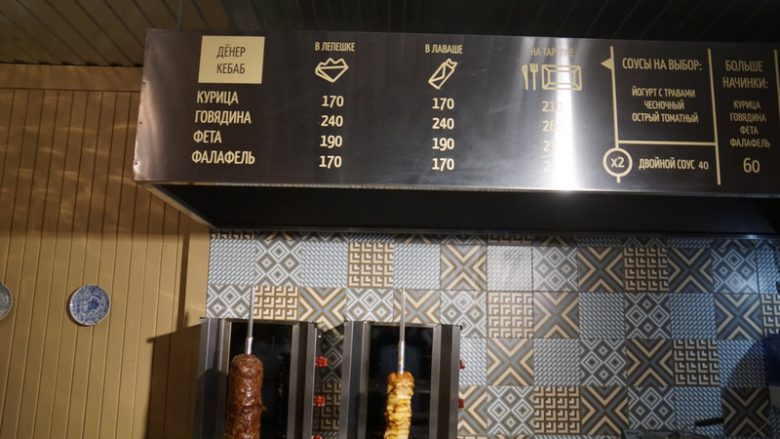 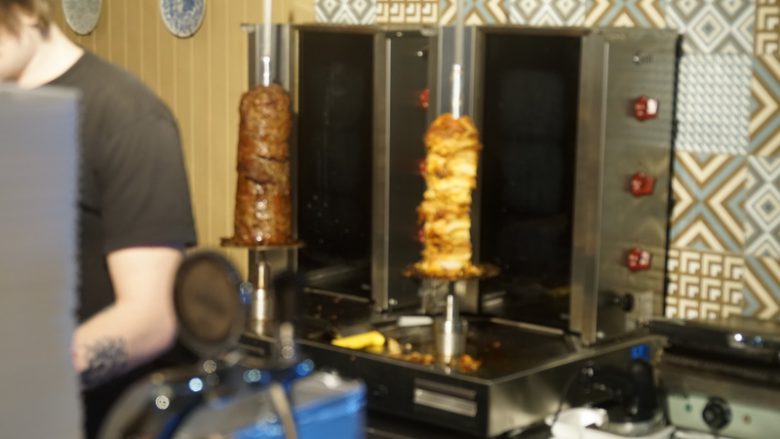 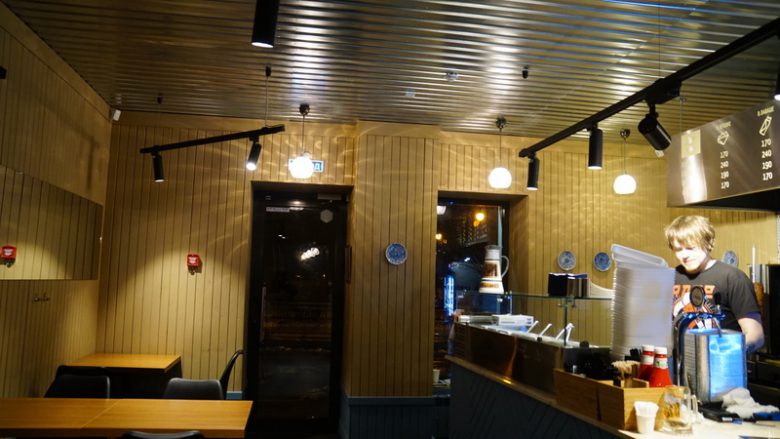 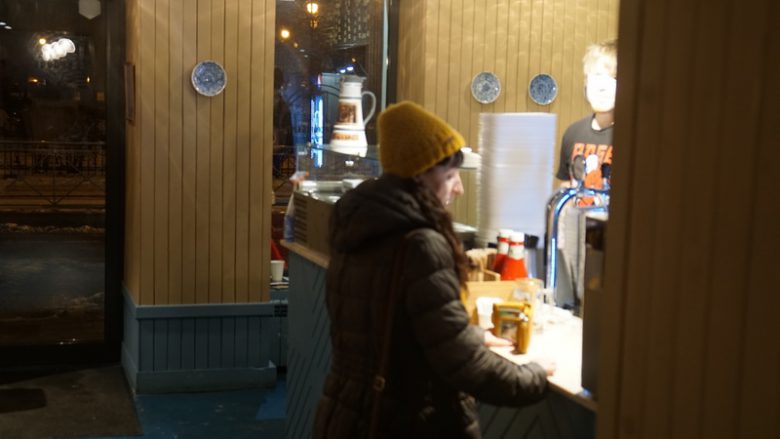 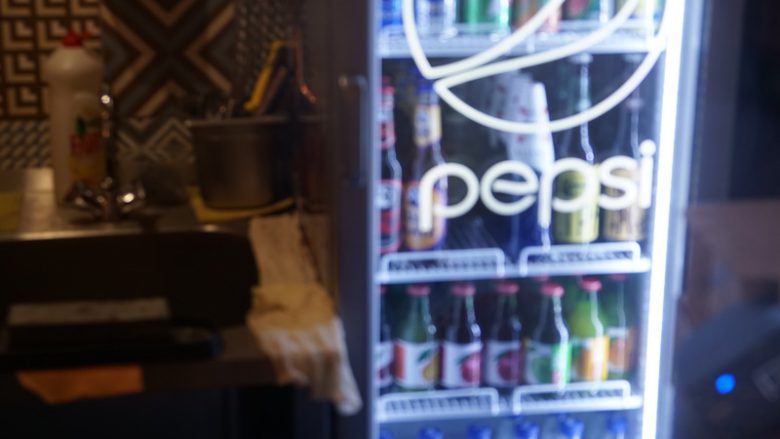 The doner kebabs are filled with chicken or beef, with feta cheese or falafel. Or you can combine like I did, feta with falafel. In bread or on a plate. Three sauces, classic, garlic or yogurt. I had mine with yogurt. Lilija only had falafel, but with garlic sauce. And while I had very normal but very tasty pita bread, Lilija had lawasch. Lawasch or lavasch is a very thin bread, that originates from the region overlapping Armenia, Turkey and Iran. It’s flat, best described as resembling the bread used for wraps. It’s normally sold everywhere in St Petersburg, but it dries out very quickly because of its thinness. Some say it’s crispy then. I disagree. I only like it when it’s very fresh. 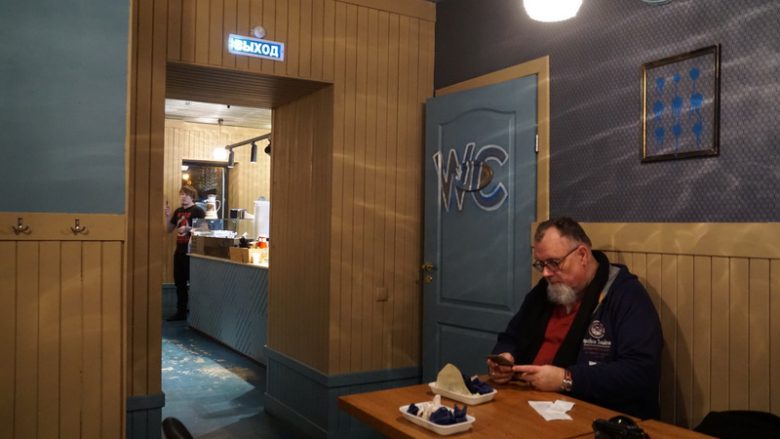 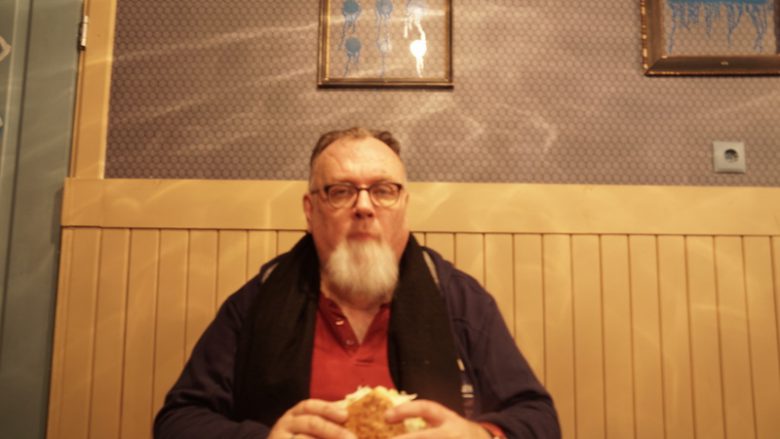 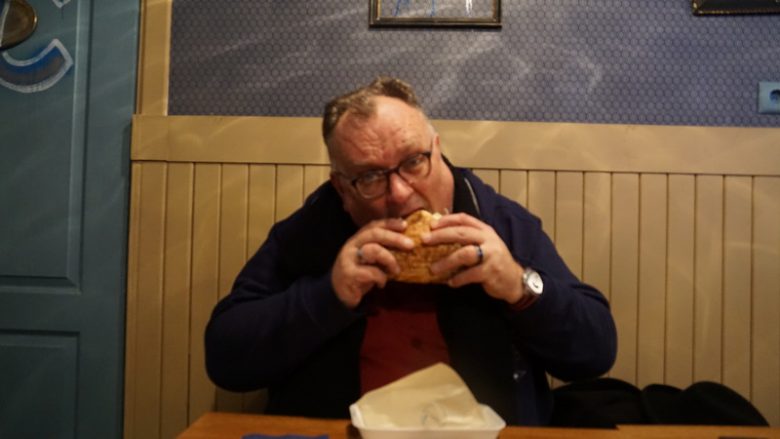 And now the most important question, after we’ve already stuffed ourselves for you: how did it taste??
Yes, it tastes good. I had too much well intended sauce, and how could it be any different for Thomas, of course I splattered. “It can happen.” says the teacher. But everything fit, the salad, the sauce and surprisingly, the falafel as well. I was very sceptical about this beforehand and was afraid of getting a flat frozen thing like the ones in the Berlin Turkish places. But no. Really, it doesn’t exactly match our top guy in Berlin on Rankestraße, but who can? No really, major praise, very good. They aren’t identical so I think homemade, as they should be. Both falafels cost 420 rubles, about 7 Euros. Petersburg costs less.
The shop interior is somewhat plain; benches, sit, eat and leave. Internet of course. And Russians must always have something old hanging on the wall. They should if they think it’s attractive. There’s also a toilet, important due to the splattered sauce. I could wash my hands. 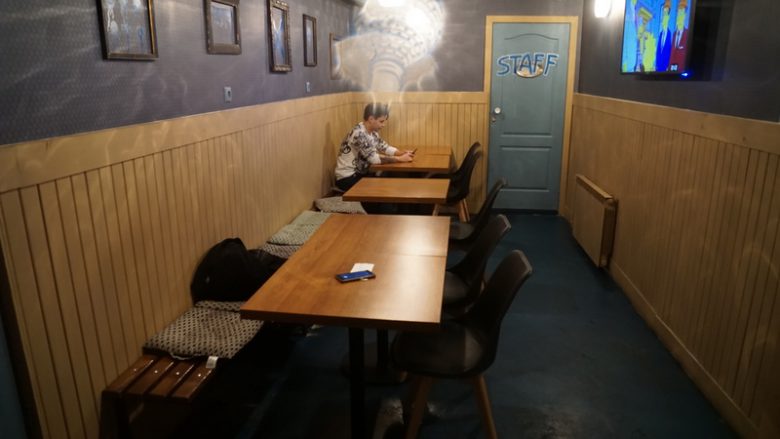 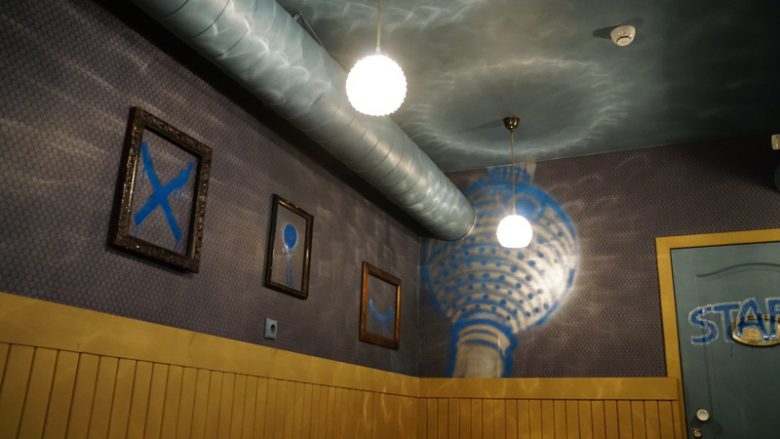 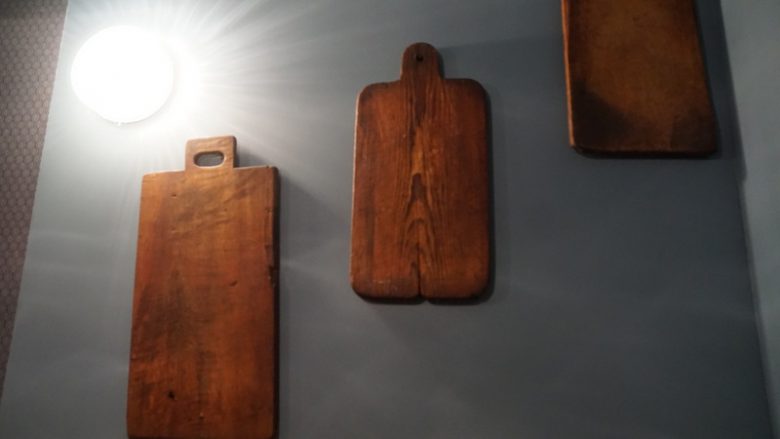 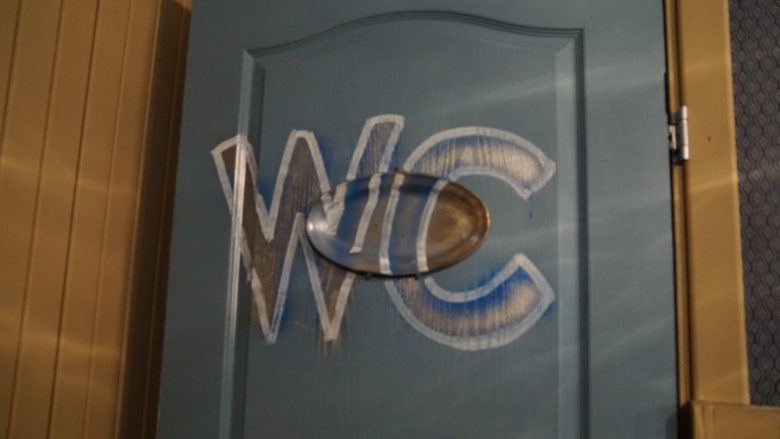 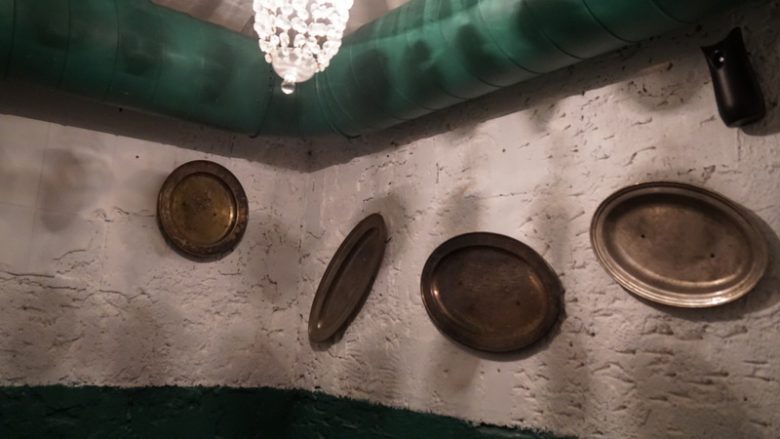 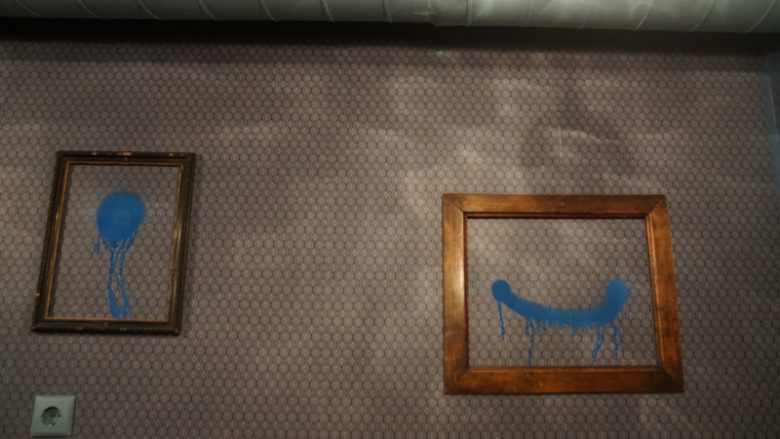 And there’s the Eiffel Tower once again, no, what am I saying? Of course the famous TV tower at Alexander Platz on the wall.
Now, it’s somewhat troubling for a true Berliner. Or East meets West. When a Russian used to go to Berlin, when the fence was still around, he headed to Alexander Platz, Always Alex, and no further. Now going as far as Kreuzberg is enough. The shop is called Kreuzberg Döneria, the logo is the TV tower. The silly tourists in Berlin would certainly think this is chic. 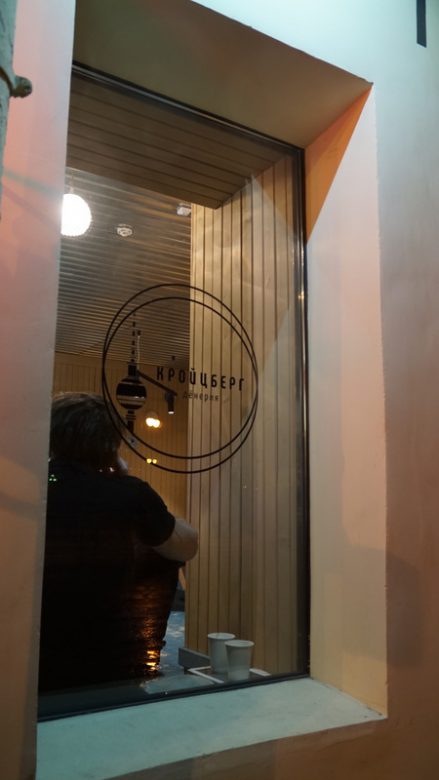 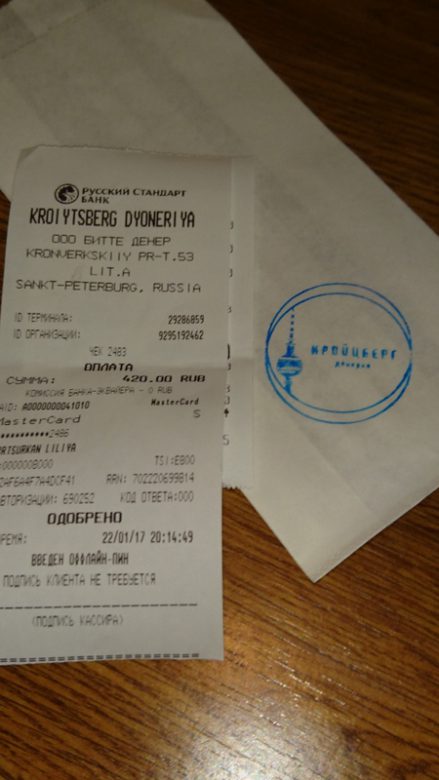 Lilija and I can recommend Kreuzberg Döneria. It’s at Kronverkskiy Prospekt 53, nearest metro station is Gor’kovskaya (Горьковская), line 2, that’s also our station but we used the other side.
But there’s also a major minus point. The plates on which the food is served here are for one-time usage, plastic. Very Turkish, the only thing missing is aluminum foil, but completely unnecessary. Plain, white porcelain plates would do the trick, and over time also lower costs for the shop. On top of it all, there’s a 40 rubles charge for the plate.
Morjens 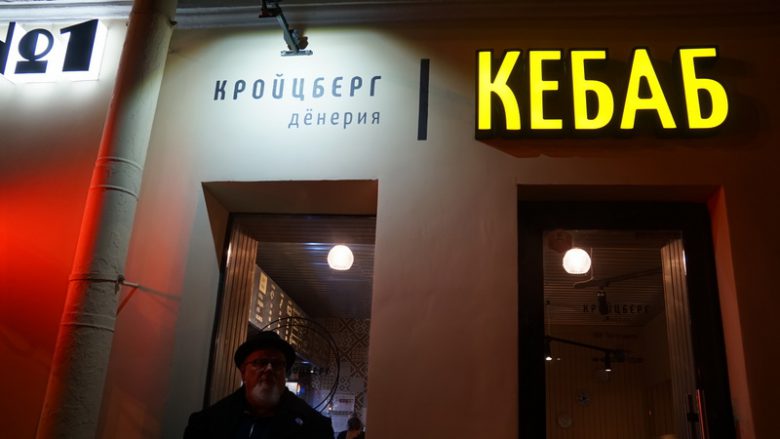