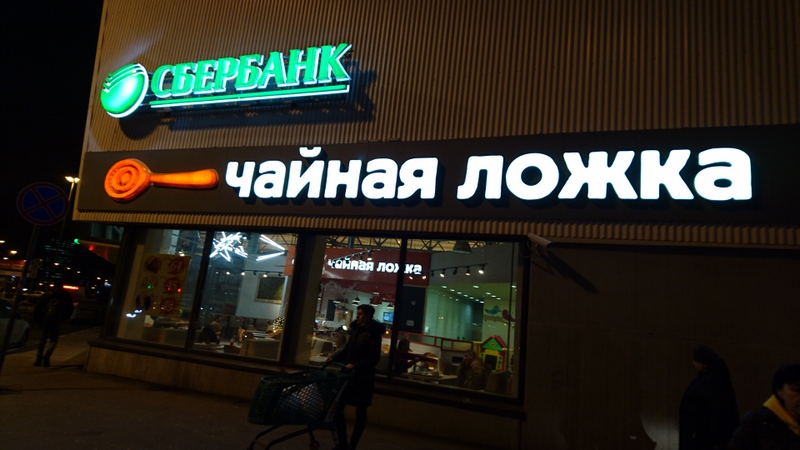 
Sort of a Novgorod sequel today. In the article on the little café in Novgorod, I had mentioned “Russian fast food”. We went shopping earlier, visitors are coming tomorrow, the last ones this month (?). The problem in St. Petersburg is that it’s great living in the inner city but there are no big stores because there’s no room for a Kaufland, Edeka-Center etc. Discounters like Dixie are usually located in two or three neighbouring old stores with a breakthrough in the walls. There’s always a sort of winding with the shopping cart around the columns, everything very convoluted. They simply can’t break away the walls in old buildings. But the selection is also not particularly a broad one. So, we must drive to one of the big stores, they are all somewhat outside the actual city center. Today to “Okeh”, which Lilija likes the most. It’s built like Real or Kaufland with a row of smaller shops and mainly a cafe or the like in front of the hypermarket cash registers. This one has a “Tchainaya Lozhka (Teaspoon)”. One of the two chains that I think are good in Piter. And since we talked about it, I could make a stop there.
This branch is quite large compared to the others that I know in the city center. Tchainaya Lozhka’s company colors are orange and white. Orange chairs, white tables. They put the remains from everything possible here. There are aluminium chairs, upholstered benches, orange wooden bench, tall chairs, small chairs, and the lamps also have no unifying style, in this respect, not typical. 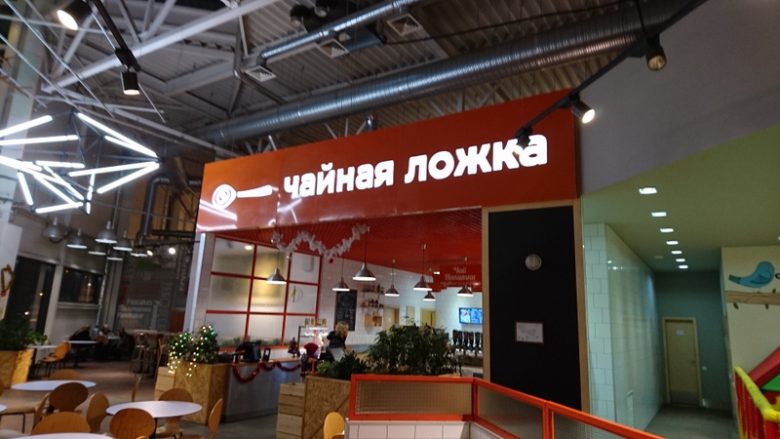 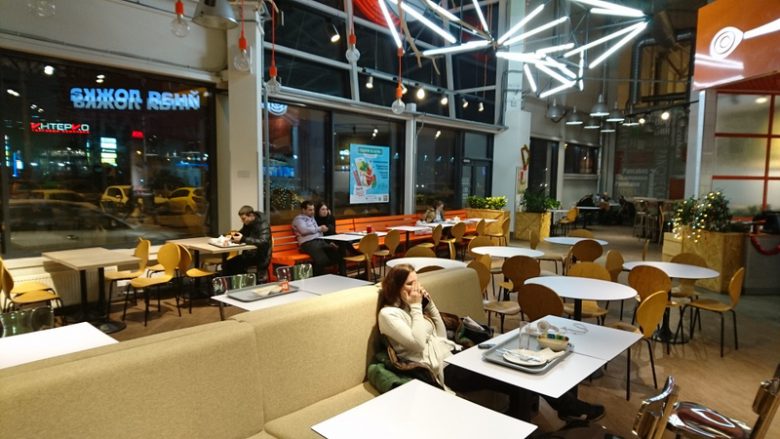 Otherwise, everything is similar, you grab a tray and go to the “blini makers”, because blinis are always made fresh. So that first, it takes awhile. There’s a wide range of choices, sweet and savory blinis, with apples or cherries, without everything, with sweetened condensed milk (very traditional), with cheese, with fish, meat, it’s endless. 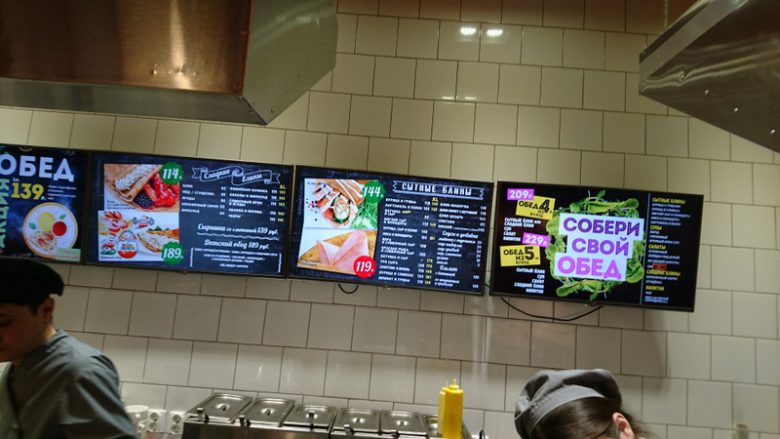 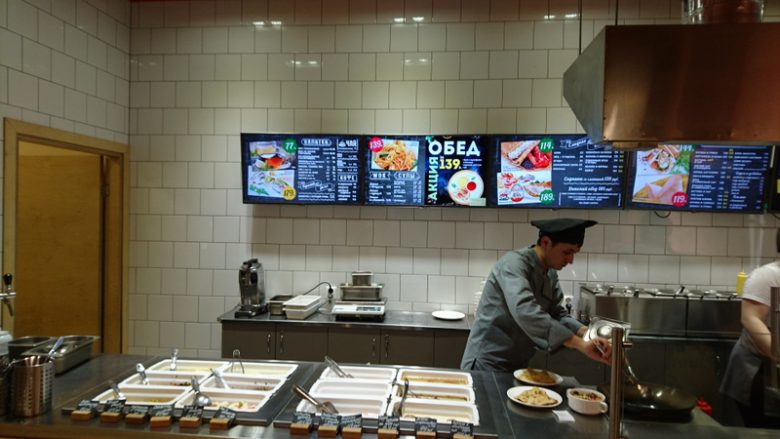 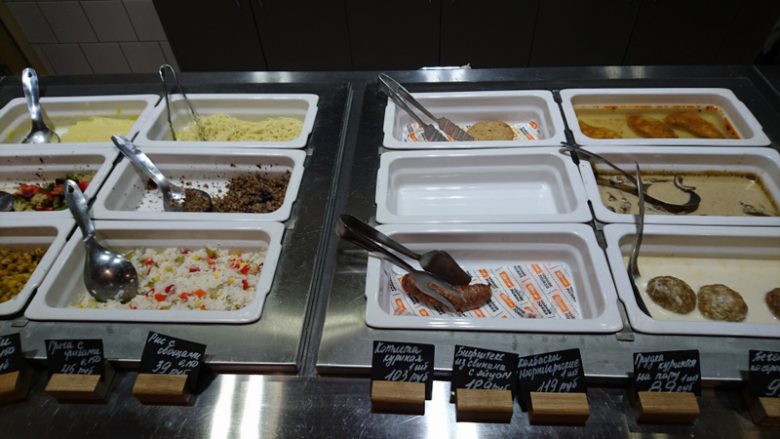 Salad can be ordered with this, compose it yourself and there are also soups. And chai, of course. Eight types. There is self service for this. In the other stores, there was more personnel and everything behind the counter, which then meant an endless Russian talk show until the order has been made. You get a numbered plate and traipse, after placing anything else you may want, fresh juice or cake e.g. on the tray, tea prepared, to the cash register. The number tells them everything, and as is the case at MacDaft, everything is nicely read through once again. In the old stores that we know, someone comes after a while and brings the blinis. They are picked up by the customers themselves here. Not well thought through, the number is neither announced nor is it displayed somewhere. 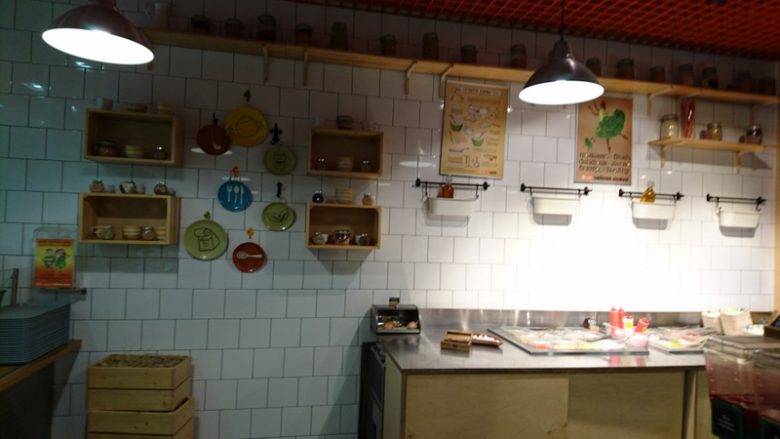 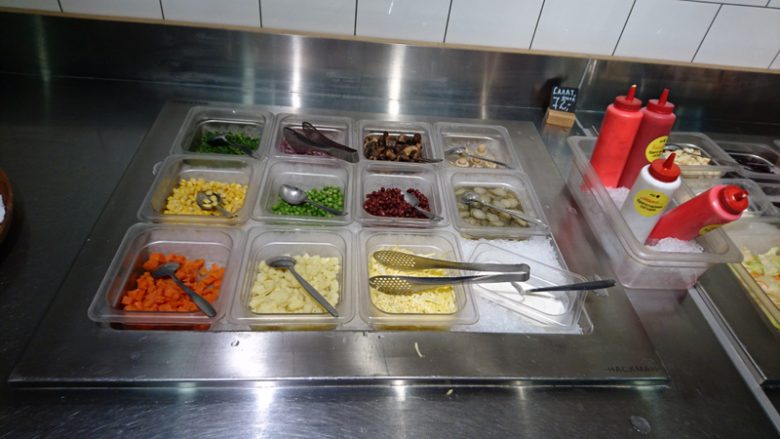 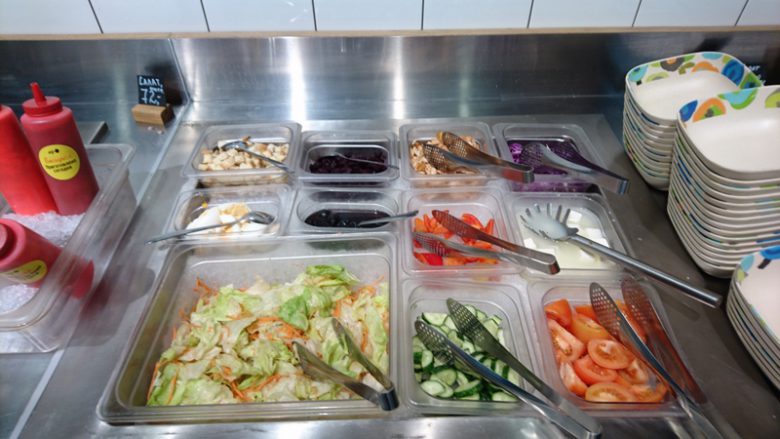 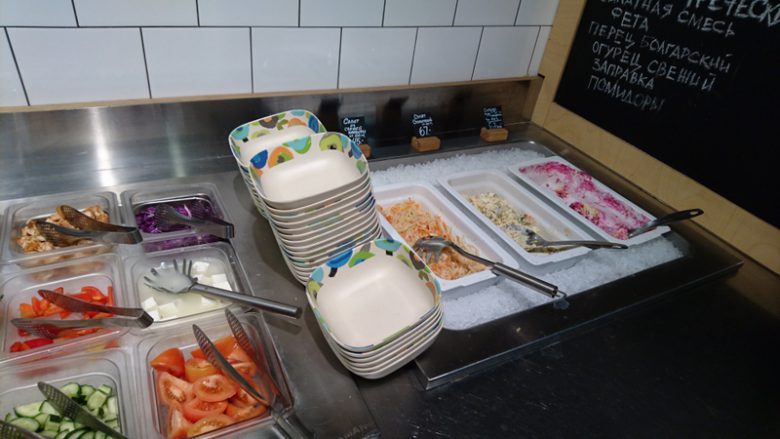 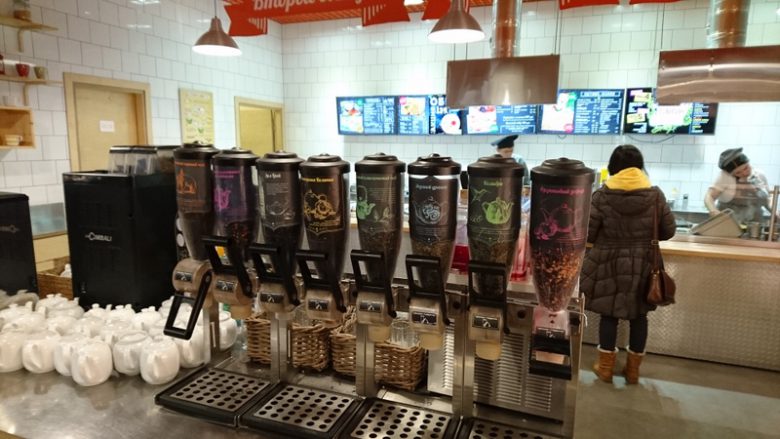 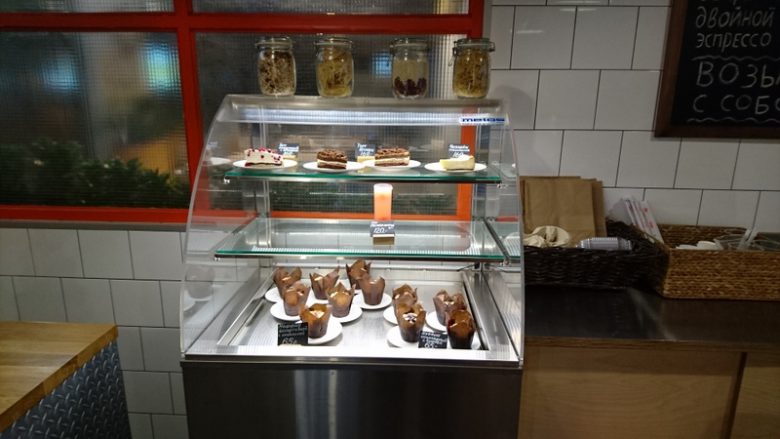 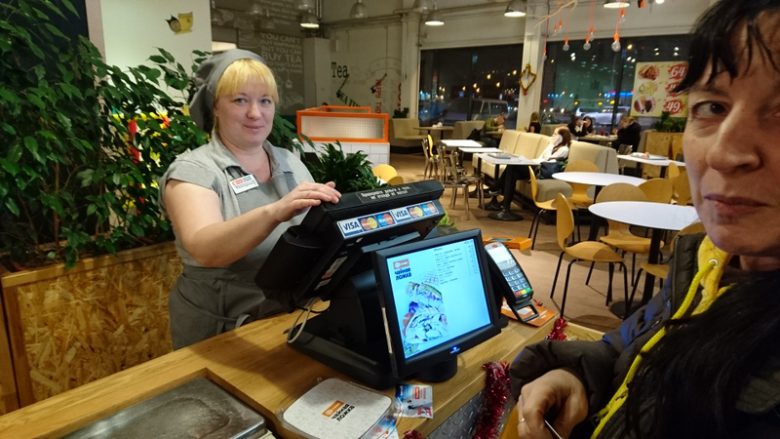 So, what was offered today? Good living!!! I had a blini with normal cheese and tomatoes, one with Georgian cheese and herbs (dill!) and one with apples and cinammon. Accompanied by a Charlottka, a traditional cake with apples, the cashier and Lilija talked me into that one together – I’m so weak, I couldn’t defend myself – Lilija also had a blini with Georgian cheese and one with apples. And a pot of black tea. I’m very conservative with tea. A total of 825 rubles (€13.75). Not a small amount, the cheap times have ended here. But two days ago, we were in a café across from the zoo, when we came from the castle area. Small cappuccino, large cappuccino and a mini cream puff: 850 rubles. 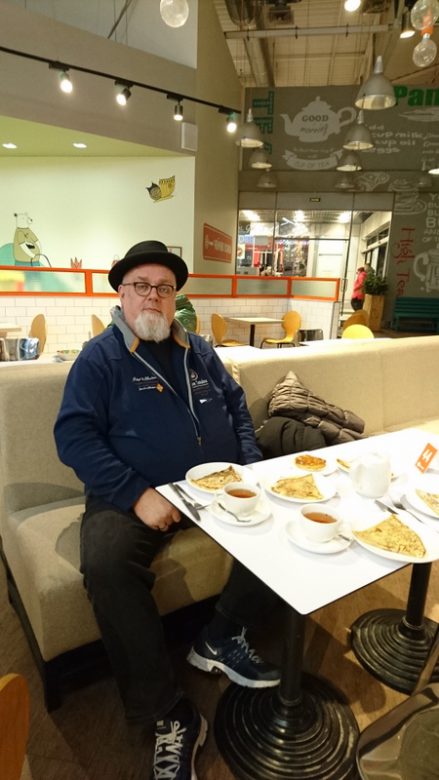 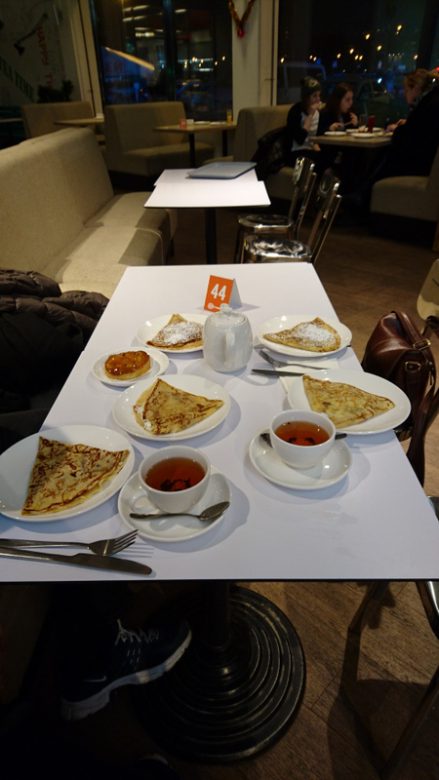 Can I finally eat?

Well, pretty good. The cheese-tomato blini had a new cheese, no longer similar to Gouda. The Georgian was different than what I had imagined. Georgian cheese – good, the Georgian cheese that I know – is slightly sour, has different consistency to this one here; I had thought more of Chatschapuri. The Charlottka was also nice and the tea was good. And water can be added again here too. 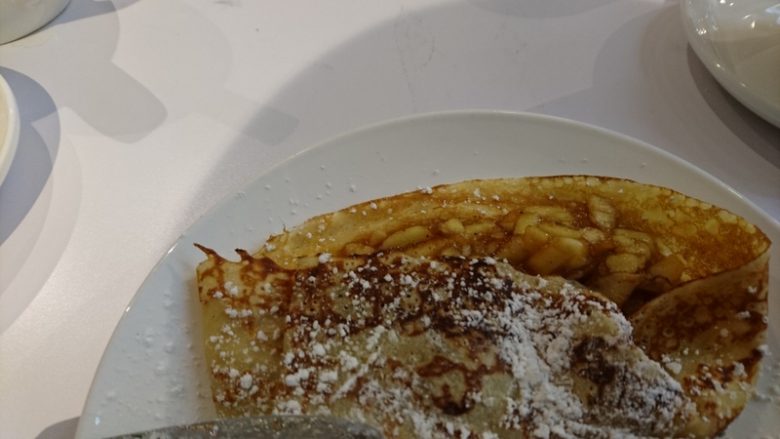 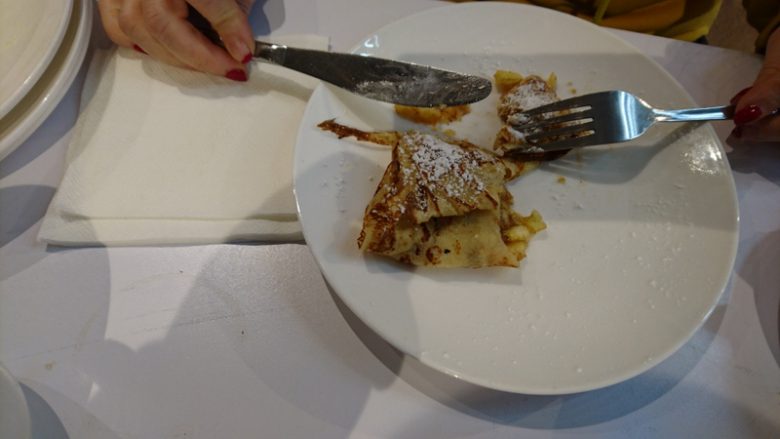 It’s a fact though that one can’t go there too often. There’s also the comparison with Teremok and the Pyschki shops. The chain with baked potato and similar stuff, mainly potatoes, isn’t around anymore. 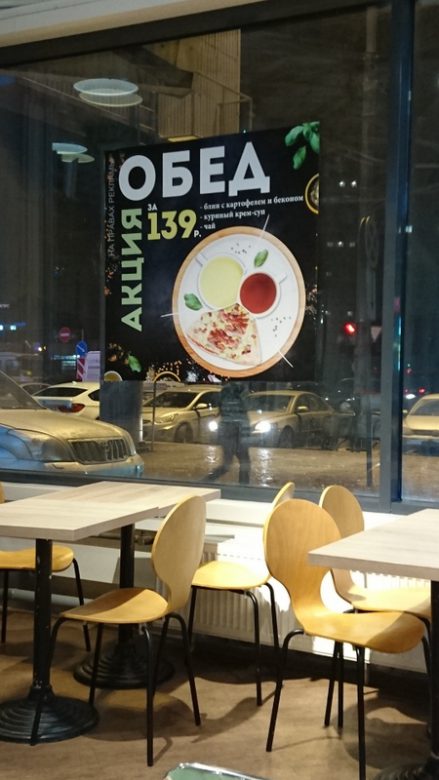 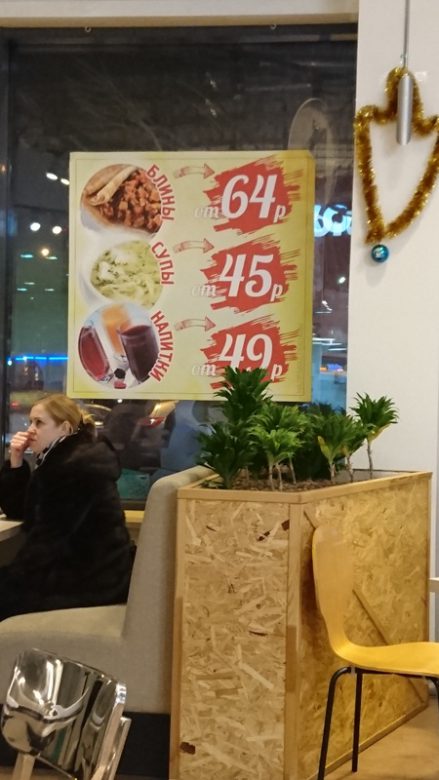 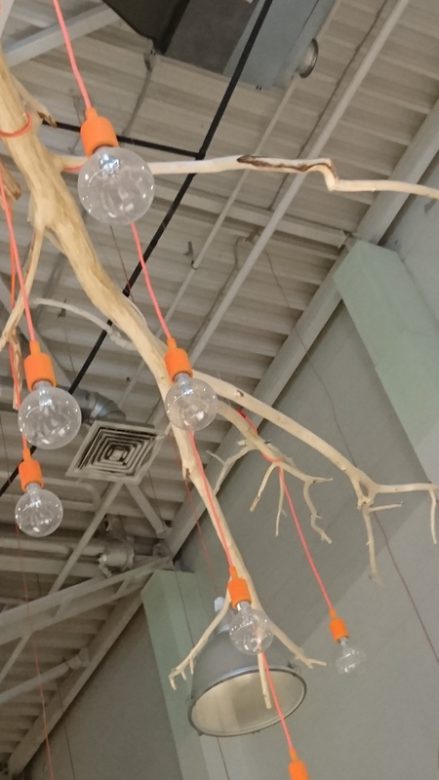 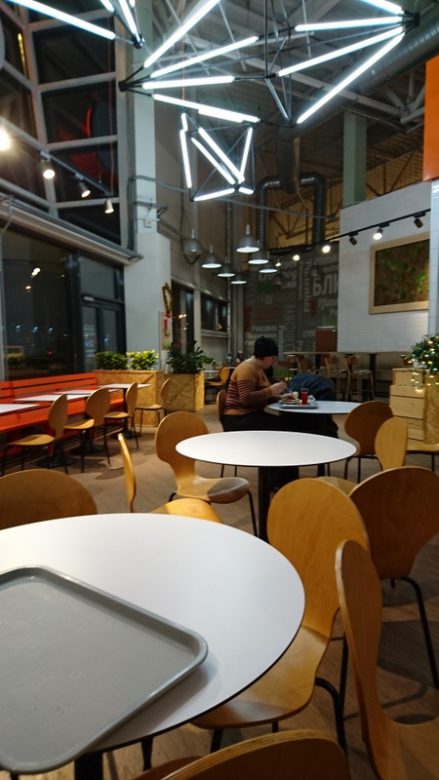 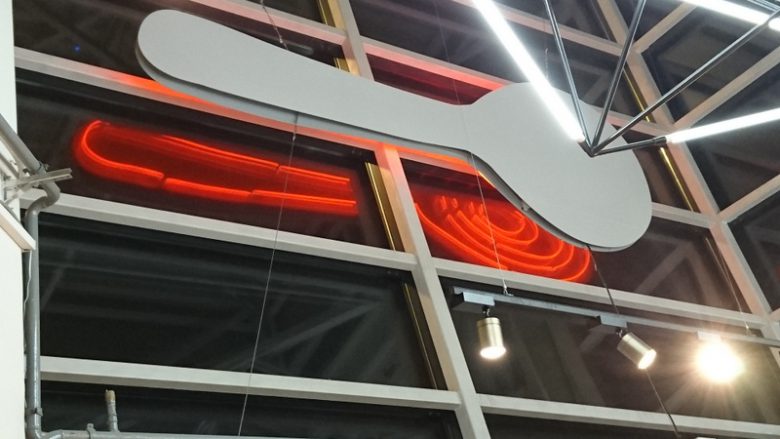 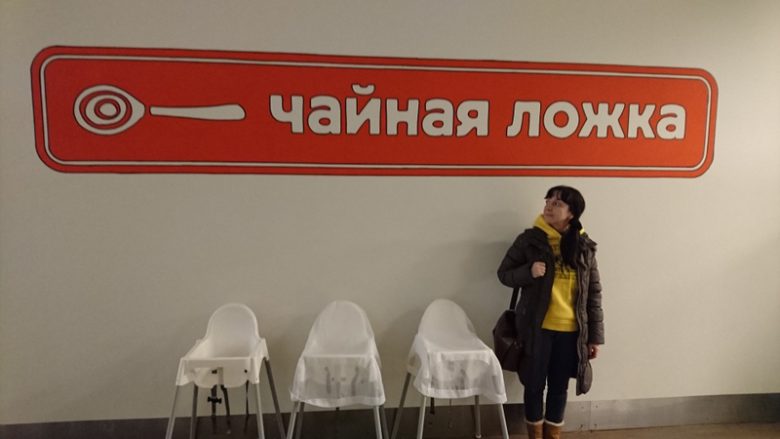 Lilija finds herself a chair.